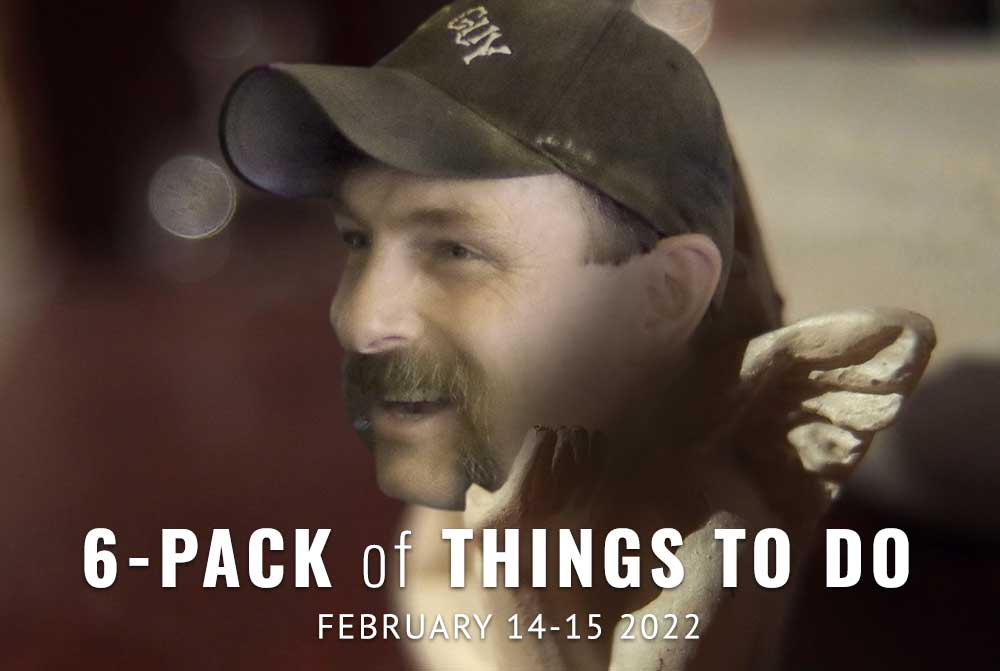 Buy those giant red balloons from Safeway. Nab that $29 heart-shaped diamelle necklace from the Shane Company. But don’t forget to acknowledge that deep-down, gnawing, sly urge you’re doubtlessly harboring to rush out into the streets and Instagram yourself professing your true love for Peaks & Pints’ 6-Pack of Things To Do: February 14-15 2022!

RANDALL NIGHT: Yes, another Valentine’s Day is upon us. Obvious expectations on this “special” day include the following: grumpy singles, unsavory public displays of affection, overly excitable partners, an arsenal of disgruntled Hallmark employees, and, of course, Randall Night at the Parkway Tavern. But before we go on, let us anticipate a few of your nagging questions. First, yes, we don’t have any clue what the beer or the infusion ingredients will be at the Parkway. Manager Cherub Jackson keeps it secret until about an hour before the tapping. Second, it the Randall involves chocolate, which wouldn’t be a shocker, don’t assume it will be an aphrodisiac. It’s not cool to buy her (or him) a crowler full of the Randall in hopes to get lucky. We’re sure you already have some ideas about how to celebrate this sugarcoated holiday, but before breaking out the Hershey’s syrup for that midnight striptease, consider Cherub Jackson’s elixir. Pro tip: Get a punch card, fill it up, and get wonderful prize at the end of the year. 4 p.m. to midnight, Monday, Feb. 14, Parkway Tavern, 313 N. I St., Tacoma

CIDER FLIGHT: Cosmic Crisp apple is the work of 20 years of study and research by Washington State University, resulting in a classically bred hybrid of Enterprise and Honeycrisp apples that’s large, round, crisp, and super juicy apple. 2 Towns Ciderhouse was the first cidery to produce a cider crafted from this exceptional new apple. Since we suggest a cider flight every Monday, today we choose a to-go flight of 2 Towns’ Cosmic Crisp variants in a flight we call, Peaks and Pints Monday Cider Flight: 2 Towns Cosmic Crisp. 11 a.m. to 10 p.m. Monday, Feb. 14, Peaks & Pints, 3816 N. 26th St., Basecamp Proctor, Tacoma

FILM: The shocking murder of George Floyd and the ensuing swell of protests across this country have forced a reckoning, not just with police brutality against Black Americans, but with the painful history of slavery and anti-Black racism in America. Who We Are: A Chronicle of Racism in America is a documentary feature film that confronts this history head on, thanks to former ACLU Deputy Legal Director Jeffery Robinson. The longtime trail lawyer studied our Nation’s history and was shocked by how deeply encoded white supremacy and the oppression of Black Americans is in that history. On Juneteenth (June 19) 2018, Robinson brought his presentation to the New York stage, performing before a packed house at the historic Town Hall theater on Broadway, which became the documentary. 2, 4:45, and 7:30 p.m., Monday-Thursday, Feb. 14-17, The Grand Cinema, 606 S. Fawcett, Tacoma

COMEDY: The Chelsea Lately show hit it big for E!, certainly thanks to Chelsea Handler, but also to her writers, especially Chris Franjola. The show offered an irreverent look at everything from current news to gossip and pop culture. Franjola performed on it more times than anyone but Handler and Chuy. A native of New York’s Long Island, Franjola created some of the program’s most memorable characters, including Gay Caveman and Bieber Man. Franjola will be at the Tacoma Comedy Club for a one-night performance Monday. 7:30-9:30 p.m., Monday, Feb. 14, 933 Market St., Tacoma