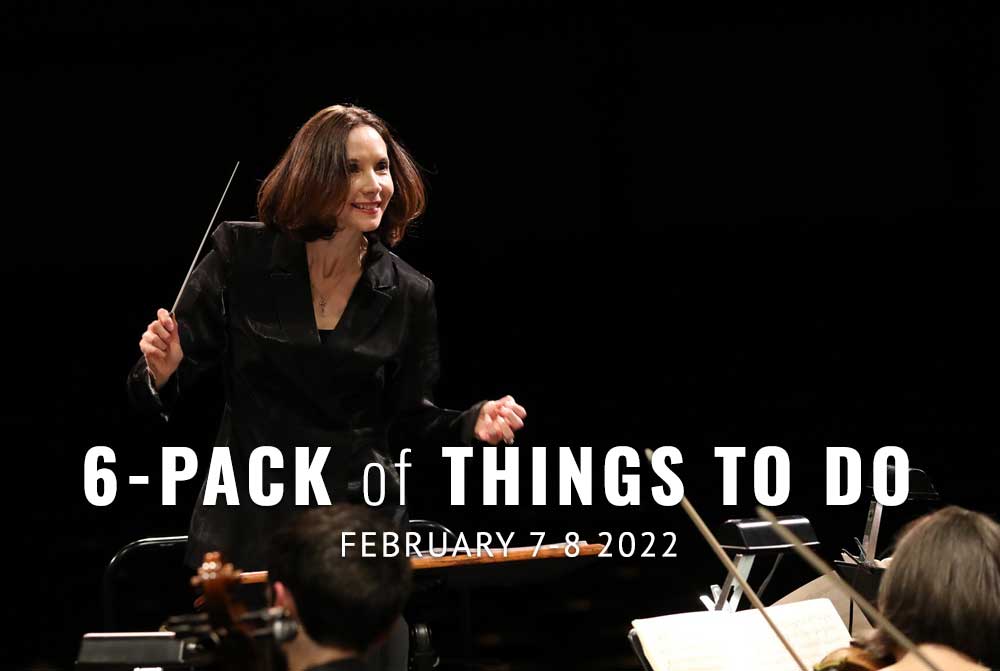 Is your life a vacuous, drudging slog, interspersed with too many lattes and not enough therapy? Thankfully you have 6-Pack of Things To Do with movies and music and trivia and stouts and cider. Cheers!

CIDER FLIGHT: Blueberries. Who doesn’t love them? When we can keep the birds from eating the fruit, blueberries are one of the most rewarding edibles in the garden. They don’t take up a huge amount of space, and they are easy to grow in our area, given sun, acid soil, and plenty of water. And the plants are beautiful. To top it off, raw blueberries are among the most nutrient-rich plant foods available — low in calories and loaded with plant nutrients such as soluble fiber, minerals, vitamins, and antioxidants. Most importantly, crisp, sweet blueberries balanced with tangy cider apples makes for a thirst-quenching beverage. Every Monday, Peaks & Pints presents a to-go cider flight. Can you guess what flavor it will be today? 11 a.m. to 10 p.m., Monday, Feb. 7, Peaks & Pints, 3816 N. 26th St., Basecamp Proctor, Tacoma

STOUT MONTH: Though it’s the shortest month of the year, February in the South Sound can be a long and lonely affair. Luckily, Peaks & Pints has an antidote: Stout Month. “We started February Stout Month to coax folks out of their houses and into their community during one of the darkest, coldest months of the year,” Peaks & Pints bartender Nicole Allen says. Six years later, February Stout Month is a thing at Peaks & Pints. And for 28 days this month, taps 22-28 will once again fade to black and run wild with pitch-black ale. 11 a.m. to 10 p.m., Peaks & Pints, 3816 N. 26th St., Basecamp proctor, Tacoma

FILM: The Grand Cinema screens Sundown, Michael Franco’s seventh feature, through Thursday. The film marks Franco’s second collaboration with Tim Roth, after 2015’s brilliant portrait of a palliative care nurse, Chronic. Here, Roth plays Neil, an aloof Brit vacationing with family members at a high-end resort in Acapulco. Lazy days of infinity pools, margaritas, and haute cuisine are interrupted by tragic news from home. A misplaced passport at the airport prevents him from immediately returning with the others, however, you’ll soon discover that it was just a ruse. 2, 4, 6 and 8 p.m., Monday, Feb. 7, no 8 p.m. Tuesday, Feb. 8, 606 S. Fawcett, Tacoma, photo courtesy of Bleecker Street

MUSIC: Tacoma-based drummer Dave Cohen honed his skills in Kansas City and has been playing for 50-plus years. Elliott Turner, recently returned to his native Tacoma, holds a master’s degree in Jazz Composition from the University of Northern Colorado. Cooper Schlegel hails from Olympia where he was recently bassist for the Olympia Symphony Orchestra. Peter Adams is a pianist/composer from Puyallup and is best known for founding and leading the fusion band, Velocity. Together, they’re The InterSound Quartet and will be performing jazz standards, bop, and straight-ahead spanning the 1930s through the 1960s at The New Frontier Lounge Tuesday. 7-10 p.m., 301 E. 25th St., Tacoma

FILM: Symphony Tacoma Music Director Sarah Ioannides participates in a special post-film discussion following the matinee screening of The Conductor Tuesday afternoon at The Grand Cinema. The documentary is directed by Bernadette Wegenstein and tells the story of Baltimore Symphony Orchestra Conductor Marin Alsop who was the first (and only) conductor to receive a MacArthur Award, became the first female to be appointed as music director of a major symphony, and the first woman to conduct the BBC’s Last Night of the Proms, and on and on. 1:30 p.m., Tuesday, Feb. 8, The Grand Cinema, 606 S. Fawcett, Tacoma