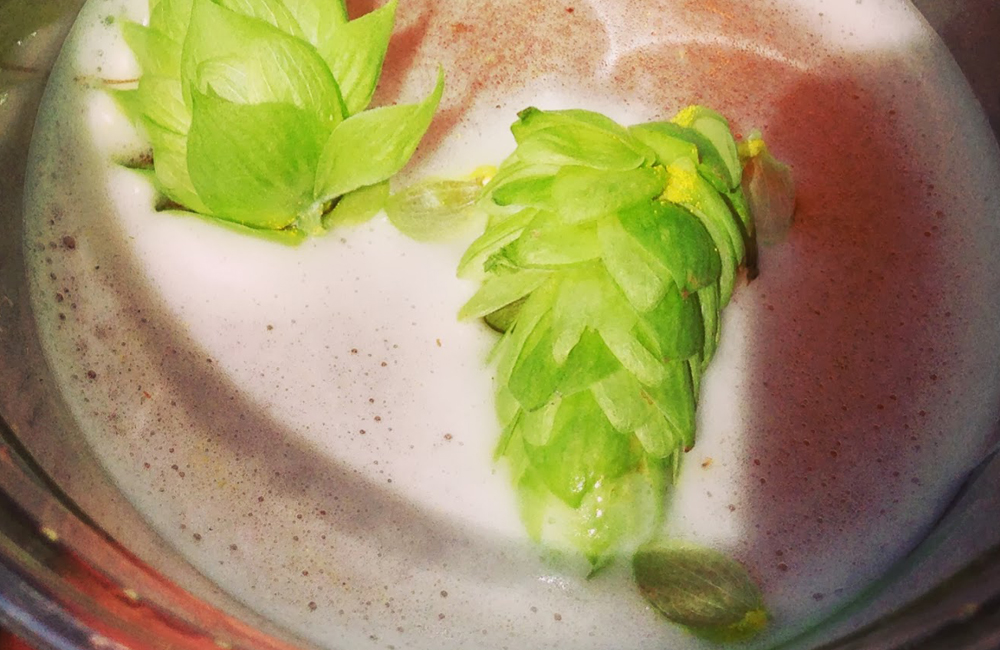 And sure there’s your rampant witty T-shirts, Magic Marker hop tattoos, sudden vicious unrelenting laugh attacks and Uber. This is pretty much a given.

And of course there is always, always Drinkability.

All topped off by the glory that is a “Roadshow.” Bless you Kim and Kendall Jones.

We speak, of course, of the Washington Hob Mob Triple IPA Roadshow.

A brewer of imperial IPAs, Adam Robbings of Reuben’s Brews in Seattle shined a spotlight on triple IPAs in 2014 launching the Washington Hop Mob Mop Triple IPA Roadshow, a series of triple IPA tasting events in Western Washington. The two-week event was a smash(ed) success. In 2015, Kim and Kendall Jones, the dynamic duo of the Washington Beer Blog, Beer Church and 12 other beer-related hugs, grabbed the hop by the brave new world and led Hop Mob down the road. The triple IPA celebration returns Feb. 2 with the kickoff at Brouwer’s Café in Seattle’s Fremont neighborhood. Thirty-two Washington state triples will be in the Café. Smaller triple IPA showcases — the Joneses call them Roadshow events — will follow for 10 days straight across Western Washington, from Vancouver to Bellingham. Peaks and Pints will host beginning at 11 a.m. Friday, Feb. 3.

You can’t explain triple IPAs to your grandparents and you can’t explain it to the religiously terrified and you can’t describe it to those who, no matter what you say, refuse to see such a beer style as anything other than some sort of freaky-deaky boozy Sam Calagione-worshipping Pliny-romp thing.

OK, triple IPAs are still a green-headed stepadult. Most national competitions don’t offer a “Triple IPA” category, forcing most of the high-alcohol, hopped-to-hell beers to compete under “Imperial/Double IPA” headers. Debate rages among the pimpliest of beer nerds over whether it’s a style at all. The actual line between a double and a triple IPA is hard to draw. Some say that any IPA over 10 percent ABV should be considered a triple. Still, beers that might fit the ABV and hop-burn requirements are still labeled as a double IPA, leaving the term “triple IPA” more of a marketing preference than an official style. What can be said is triple IPA have outrageous amounts of dry hops, hop flavor, malt flavor, alcohol and bitterness. The Triple IPA may be similar to a Double IPA in hop character, but is differentiated from the style by a thick, syrupy body accented by intense hop resins that make it a heavy sipping beer. Confused?

What they are, really, is a chance to explore hop extremes and laugh at titles. Humonkulous. Hayduke The Wrencher. Blimey Thats Bitter. Hoptopus Rex. And this is why Washington Hop Mob is still so vital, so important.

Peaks and Pints will tap 11 triple IPAs during our Roadshow event beginning at 11 a.m. Friday, Feb. 3.

7 Seas Brewing Trident Triple IPA (10.8% ABV, 90 IBU): Brewed with NW Pale malt and a small addition of dextrose for increased attenuation and dryness this triple was hopped at seven different stages throughout the boil and whirlpool, then dry hopped twice in the secondary. It’s juicy, bitter and deceptively strong.

Bale Breaker Mount Saint Humonkulous (9.3% ABV, 100+ IBUs): This triple hits like a volcanic eruption of the finest Yakima Valley hops, thanks to a heavy dry-hop addition of Mosaic, Equinox, and Citra.

Kulshan Excelsior Peak IIIPA: (10.5% ABV, 100 IBU): An American Imperial IPA deeply rooted in the Pacific Northwest that provides a perfect showcase for hops. Complex and delicate layering of tropical fruits, berry and stone fruit fill the aroma, while notes of citrus, floral, and pine are present as well. Reaching Over 10 percent in ABV, a smooth alcohol warming is balanced by strong hop flavor and clean bready malt.

Georgetown Tank Girl: Boom Boom Boom (9% ABV): Tank Girl rolls up with big peach and crushing tropical aromas paired with an explosive citrus flavor. With less focus on high octane and more on the “Boom Boom Boom,” this IPA is loaded up with just under 7 pounds per barrel of heavy impact hops that will leave you shocked and delighted.

Pike Hopulus Erectus (11% ABV, 90+ IBU): Pike Brewing will unleash a new recipe for their triple, Hopulus Erectus. They filled the hopback with whole leaf Citra hops and then dry-hoped it three times with Simcoe and Mosaic hops. They’re talking 10 pounds of hops in each barrel.

Reuben’s Blimey That’s Bitter (10.5% ABV, 80 IBU): Blimey, it has an intense citrus, pine and tropical aroma followed by a smooth medium-full mouthfeel. First brewed in early 2014, Reuben’s Bliney That’s Bitter features 6 pounds per barrel with 90 percent of these hop additions in the last 10 of the boil and later.

Snoqualmie Falls Pucker Punch (9.3% ABV, 90 IBU): The “Punch” is courtesy of Bravo hops, so expect aromas of light fruit (apple and pear) a lot of flowery notes with a very light hint of tangerine and apricot, and aslight earthy background.

Sound HuMonkulous Triple IPA (10% ABV, 100 IBUs): The Kitsap County brewery will blast you with tropical hop aromas, then fresh, intense hop flavor. Quality malts back it up with just enough body to balance the Galaxy, Citra and Chinook hops.

Three Magnets Rain Rain Rain Triple IPA (12.5% ABV, 100+ IBUs): Rain, Rain, Rain is made with Zeus and Magnum hops for bittering, with Mosaic, Amarillo, and Centennial for finishing. It is medium amber in color, with a lovely honey tinted hue. Candied citrus mingle with fresh muskmelon in the aroma. As it washes over the palate flavors of tangerine, melon, and berries culminate in a snappy, hoppy finish.

Washington Hop Mob Triple IPA Roadshow is a thrilling, hilarious, kaleidoscope of wayward, brewing energy and excess; nothing you can ever do can prepare you for the onslaught. As it should be.

For more information on the Washington Hop Mob, and to scan the other participating Roadshow venues, visit wahopmob.com.