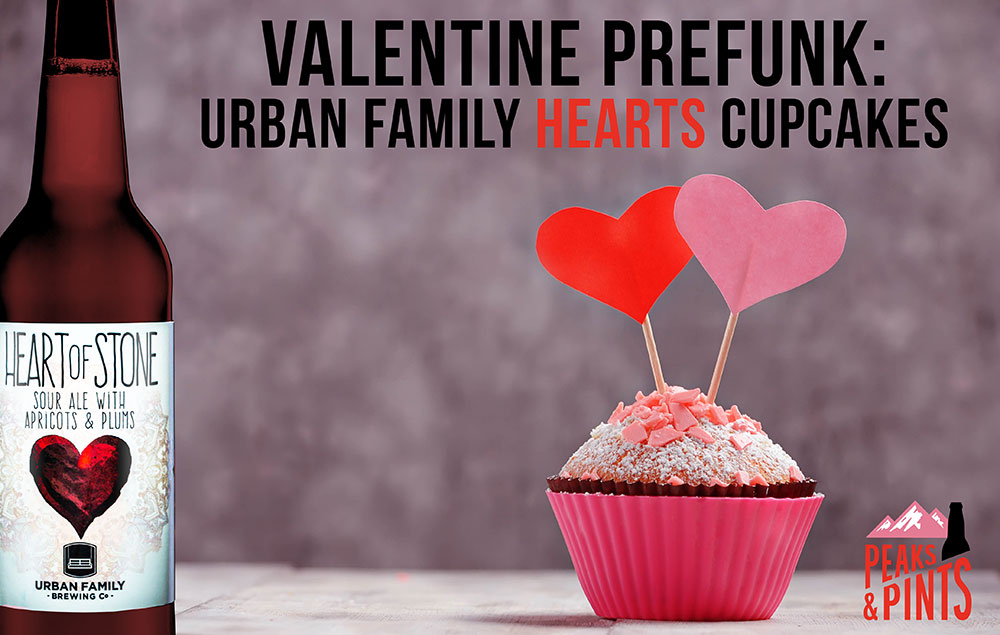 Urban Family will spread the love with Heart of Stone Apricot Sour, Briar Heart Boysenberry Sour, and Tropic Heart Passionfruit Sour — enough to push anyone to first base. We’ll also tap Addition by Addition Barrel-Aged Raspberry Sour, Coffee Dark Hymn infused with single origin coffee from Onda Origins, Preservation Berry Sour and Guava Dawn no doubt prompting extra base action. Oh, but then we’ll pair a chocolate cupcake with the Coffee Dark Hymn, a fruited cupcake with Heart of Stone buttercream, and a white balsamic cupcake with Addition by Addition. That’s a Valentine homerun! (Warning: Liquor Boards outlaws making out in bars. Growlers and takeout boxes will be available.)

“Peaks and Pints patrons will recognize the face behind the cupcakes,” says Matt McLaren, one of only three Advanced Cicerones in Washington state. “Jessica Duggan goes by The Vintage Baker, but many folks will recognize her from her days owning the Tattered Apron Bakery in South Hill.”

Duggan and her husband, Brian, began selling old fashioned pies and other baked goods at farmers markets in 2014 before opening the South Hill bakery two years later, followed by a downtown Puyallup location. She still has her own baking business in Puyallup, The Vintage Baker. Operating out of her home, she prepares scones, cookies and other treats for farmers markets and special occassions, such as Valentine Prefunk: Urban Family Hearts Cupcakes night at Peaks.

“Jessica made her national television debut on the Food Network’s ‘Spring Baking Championship,’ and did well,” adds McLaren, who reps Urban Family beers through Orcas Distributing. “She typically sells out her baked goods within an hour at the farmers markets.”

Urban Family Brewing has also received media attention. Seattle’s leading curator of fruited sours, has moved back to Ballard, the Seattle neighborhood where they launch in 2014. Popularity and growth forced them to moved across the water to the Fisherman’s Terminal side of Magnolia in 2016, where they honed their sour skills, often mentioned as one of the city’s best breweries by local and national press. The accolades have sent Urban Family back to Ballard where they’re putting the final touches on a large production facility and taproom across the street from Stoup Brewing. Expect more lagers and barrel-aged beers, in addition to larger sour yields.

If you love dessert and you love beer then you are sure to love the Valentine Prefunk: Urban Family Hearts Cupcakes event. Join us from 6-9 p.m. Wednesday, Feb. 5 for a guided tasting through these uniquely paired offerings.