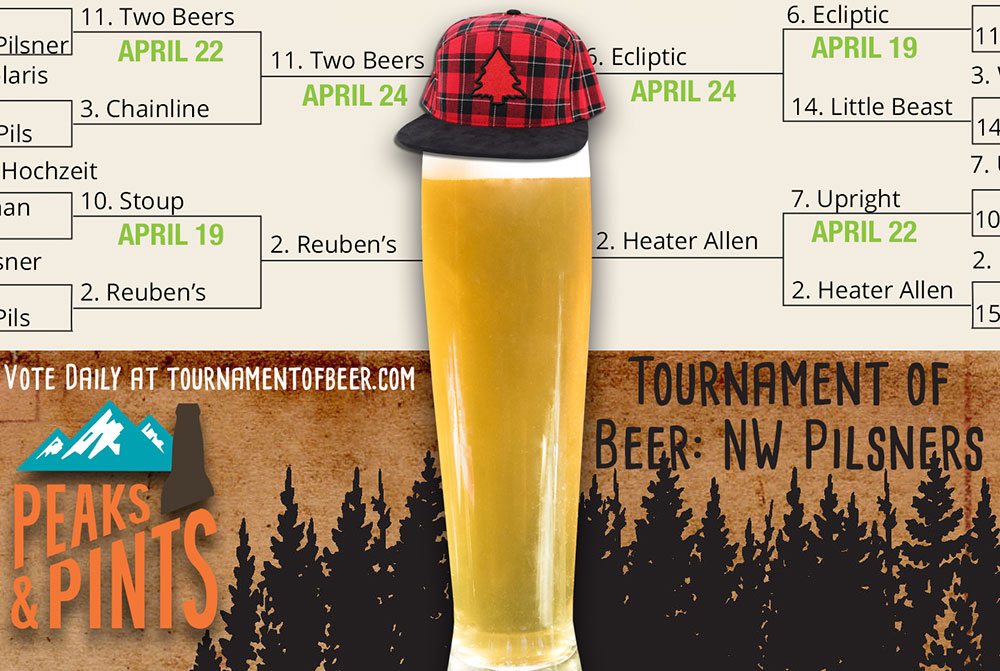 RON SWARNER: The best pilsner in the Pacific Northwest? You think you know where to find it. We all do. After weeks of feverish voting (and with the help of a complicated computer program stolen from cavemen) we at Peaks and Pints have watched you, beloved voters, narrow down pilsners from Washington state and Oregon from 64 to the very best 16, the rounded mouthfeel of the crop. Yesterday, the first eight pilsners in the Sweet Wort 16 did battle. Today, the remaining eight go at it.

PEAKS AND PINTS WEATHER GUY: Partly cloudy day at Pinnacle Lake of the Mountain Loop Highway. High should hit 49. Winds arrive at 9 mph. There is a Sitcom name generator: whatever a bartender last called you. This spring, I’m staring in “Filbert Hankerdoodle.”

RON SWARNER: The way Maritime Pacific Brewing has managed to bring it during this year’s Tournament of Beer: Northwest Pilsners has been nothing short of amazing. Yesterday, many already had competitor Sumerian Lucidity penciled in as the winner. These people, however, were foolish — as Maritime Pacific, once again, proved their pilsner prowess. The votes don’t lie, and when the final buzzer sounded, Maritime Pacific Portage Bay Pilsner had racked up 52 percent of the vote and eased into the Hot Break Eight competition.

RON SWARNER: R-E-S-P-E-C-T is how the song goes, and that’s just what unheralded Farmstrong Brewing has been earning so far in the Tournament of Beer: Northwest Pilsners, knocking off Brothers Cascadia’s The People’s Pilsner yesterday and garnering 54 percent of the vote. This is all more impressive when you consider Farmstrong’s Cold Beer Pilsner took out Backwoods Brewing and Wander Brewing in earlier rounds. Farmstrong looks, er, strong folks.

PEAKS AND PINTS WEATHER GUY: I’m signing up for a Skagit Valley Farm CSA program that is only a weekly six-pick of Cold Beer Pilsner.

RON SWARNER: Despite a late push from Breakside Brewery’s Dekum Street Brewpub, Occidental and its large, devoted German following proved too powerful in yesterday’s action, catapulting the Bohemian Pilsner into the Hot Break Eight with a resounding 70 percent of the votes.

PEAKS AND PINTS WEATHER GUY: Beating no.1 seed Breakside Pilsner and all the brewery’s brewpubs is nothing short of amazing.

RON SWARNER: The Oregon Region Sweet Wort 16 game was heavy on Czech flavors and light on drama, with Buoy Czech Pils cruising to victory with 64 percent of the votes. In pre-game chatter, Tournament of Beer analysts predicted a close game due to an extremely even matchup of two strong defensive breweries with serviceable offenses. Proving the analysts wrong, Buoy Czech Pils moves into the Hot Break Eight round with 60 percent of the votes.

RON SWARNER: Let’s wade through the soft water. The following are advancing to the Hot Break Eight:

RON SWARNER: OK, let’s do a quick liver-size check, then dive into today’s Sweet Wort 16 pilsner battles. Vote for one pilsner per game (one device per game). Voting for today’s pilsner battles ends at 11:45 p.m.

RON SWARNER: Reuben’s Pilsner has had an easy time dispatching the competition up to this point. But this battle for a birth to the Hot Break Eight may prove more of a challenge. Two Beers Pilchuck Pilsner has the heart, the talent and the impressive wins (Airways Preflight and Chainline Polaris) in the first two rounds. And, lo and behold, we haven’t mentioned Two Beers marketing and communications guru Caity Rock yet. She manages the digital media channels at Two Beers, which is the envy of the craft beer universe. Does Reuben’s Brews worry about a sparkplug social media manager championing a pilsner? If so, they’ll just brew another award-winning craft beer. That’s what they do.

PEAKS AND PINTS WEATHER GUY: Downtown Seattle sits between these two breweries. Two Beers and Reuben’s delivery trucks will eat up the downtown roads — except Pioneer Square, of course.

RON SWARNER: Kulshan Pilsner is making a strong run at the Hot Break Eight as most predicted. Since opening their doors in 2012, Kulshan Brewing Company has been brewing true-to-style, award-winning ales and lagers in Bellingham with great success. Just a few short years after opening their Sunnyland neighborhood location, they opened a 30-barrel production brewery in response to an overwhelming demand for more beer. Their Pilsner rolls with balance, simplicity and flavor. However, they must first get by Scuttlebutt Ray of Hope Pilsner. The Everett brewery’s pilsner is worldly, with Canadian Pilsner malt providing a light, clean malty aroma and flavor, while German Hallertau hops round it all out with a subtle bitterness and slightly earthy and spicy finish. According to Scuttlebutt’s website, their pilsner is “so good it might make Ludwig Narziss cry.” Vote now.

RON SWARNER: Before getting licensed, Rick Allen spent a year working on brewing techniques, consistency, and recipe development. At one point he brewed 14 batches of Pilsner in a row — unheard of for a homebrewer. Heater Allen Pils is currently ranked as the no. 1 pilsner on ratebeer.com. John Harris started his career as a brewer at McMenamins Hillsdale Brewpub in 1986. He left to become the founding brewmaster at Deschutes Brewery in 1988 and then went on to serve as a brewmaster at Full Sail Brewing in 1992. In 2013, he opened Ecliptic Brewing in Portland. Both of these pilsners took the carbonation out of their competitors. Let’s get ready to rumble.

pFriem Family Brewers has seen explosive growth and a huge public response to its German, Belgian and Northwest-inspired beers since opening in 2012. Last year, it was named the Mid-Size Brewing Company of the Year at the Great American Beer Festival, in addition to winning a host of medals in international and national brewing competitions. Deschutes Brewery remains the 10th largest craft brewery in the country, according to the Brewers Association’s recent report. Deschutes Brewery sold the most beer in Oregon last year with 66,000 barrels. That’s all fine and dandy, but this isn’t the Tournament of Beer Statistics. It’s a tournament championing pilsners, and these two high-ranking, delicious pilsners will be participating in what Madras, Oregon call the Tournament of Between Hood River And Bend Highway Hell. 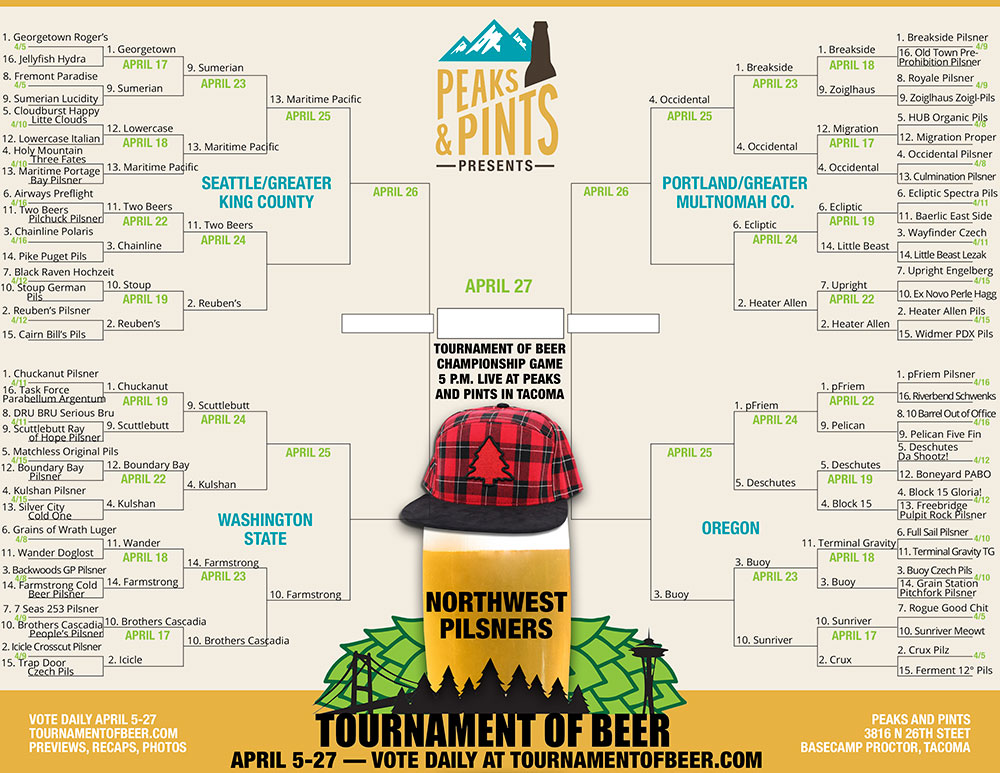