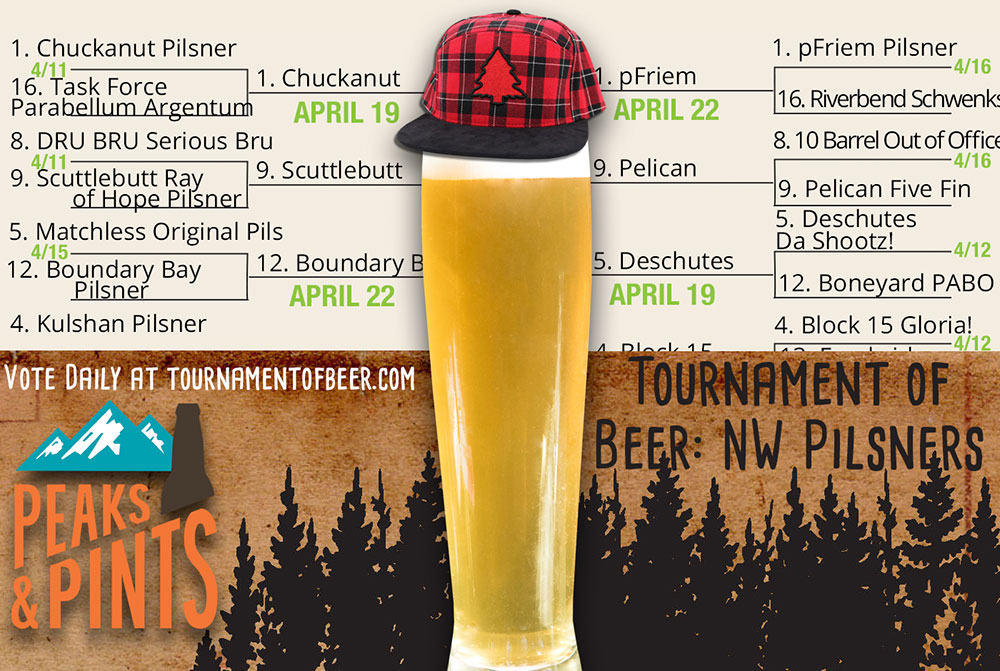 RON SWARNER: Laid-back is the essence of Friday. That means an early lunch with a pilsner. Then, blaze from work early to grab another pilsner. Dinner with friends at Peaks and Pints and plenty more pilsners … you know the routine. The mere thought of lifting a finger to wash the mountain of dishes in the sink should make you shudder. Yesterday, a good chunk of the South Sound changed its Thursday routine. Voting in the Tournament of Beer: Northwest Pilsners was added to the mix. Yesterday saw the most votes yet; no doubt what you do when watching a full night of Animal Channel’s River Monsters.

PEAKS AND PINTS WEATHER GUY: It’ll be hella breezy at Mt. Rainier National Park today. Rain and snow in the morning, then widespread showers in the afternoon. No snow accumulation near Paradise. Snow level near 7,000 feet. Remember that scene in the movie Twister where a cow goes flying through the sky? He’s all like “Moooooo.” Yeah, that part is pretty awesome.

RON SWARNER: We’re deep into the Tournament of Beer: Northwest Pilsners Second Round with pilsners poised to make the final push to the Fermentation Four, which will begin April 26. What’s on the line? The winning brewery receives a permanent spot on Peaks and Pints Western red cedar tap log through the summer.

Here’s a look at today’s Tournament of Beer Second Round action and a recap of yesterday’s results. Enjoy your Friday and get to voting. …

RON SWARNER: If there’s one thing our beer tournaments has seen over the years; you don’t mess with Ballard. The community huddles around their own — more often than not with fish-stench sleeves rolled up and dented car bumpers. Maritime Pacific grabbed a respectable 62 percent of the votes yesterday in its win over the tough but sexy Lowercase Italian Pilsner. That’s impressive. That’s Maritime Pacific.

PEAKS AND PINTS WEATHER GUY: Maritime Pacific co-owner Jane Hancock use to shop in the Peaks and Pints’ building when it was a five-and-dime store back in the day.

RON SWARNER: Farmstrong put its big shoulders into this game. Grabbing 56 percent of the votes over Wander‘s Doglost, the Mount Vernon brewery dominated the mash tun for much of the game, only letting up when it needed to herd chickens back into the pen.

PEAKS AND PINTS WEATHER GUY: I see what you did there.

PEAKS AND PINTS WEATHER GUY: Batten down the hatches, Portland!

RON SWARNER: Three seed Buoy Czech Pils knocked 11th seed Terminal Gravity TG Pilsner out of the tournament yesterday. We don’t have any idea if the Astoria brewery’s announcement on Facebook that it uses PakTech 6-pack holders made with 100 percent post-consumer material repurposed from milk jugs had anything to do with them grabbing 59 percent of the vote, but it certainly didn’t hurt.

PEAKS AND PINTS WEATHER GUY: Peaks and Pints recycling rules are subject to change at a moment’s notice depending on the day of the week, lunar phase, or the whims and desires of our fickle ownership. If we’re standing in front of our color-coded waste receptacles feeling confused and frustrated, then we’re probably doing it right.

RON SWARNER: OK, let’s do a quick liver-size check, then dive into today’s Second Round pilsner battles. Vote for one pilsner per game (one device per game). Voting for today’s pilsner battles ends at 11:45 p.m.

RON SWARNER: Both of these Ballard breweries have rabid fans and die-hard supporters, as well as worthy pilsners, so this pilsner matchup may be the most hotly contested of the competition to date. Reuben’s Brews Czech style Pilsner is a clean, bright lager with bready malt notes and floral with a firm bitterness. Neighboring Stoup German Style Pilsner is crisp, clean with subtle grain sweetness, spicy hop aroma and a refreshingly dry, hop-forward finish. If you don’t know their stories, or worse, their pilsners, then I don’t even want to know you.

PEAKS AND PINTS WEATHER GUY: Lutefisk and gravlax coming down from the skies! Olafs and Siennas living together! Mass hysteria!

PEAKS AND PINTS WEATHER GUY: If Chuckanut co-owner Mari Kemper grabs a bullhorn and waxes Bellingham history and tidal pools, then game over.

RON SWARNER: The Tournament of Beer can be brutish and short. Temperature fluctuations can destroy title dreams of even the best pilsner brewers. When you filled out your Tournament of Beer brackets, we hope you put value in experience. Ecliptic Brewing made it into last year’s Tournament of Beer: Northwest Porters. Those who have been participated in beer tournaments are more consistent and less prone to dropping a brewer’s paddle on the floor or accidentally adding Saaz hops to a German style pilsner. First-time breweries, on the other hand, can get lost in the moment of the tournament. They might start with not enough lager yeast, trying to make an impression on the big stage. Ecliptic Spectra Hoppy Pilsner, with its multiple medal-winning head brewer, looks tough to beat. We’re sure Little Beast Brewing doesn’t give a crap about experience. It’s popular with the cool kids, chilling in the former Lompoc Brewing Hedge House on Southeast Division in Portland. Little Beast Brewing is one of the most talked about and critically acclaimed new Oregon breweries of the time, and will make a run for the title if it feels like it.

PEAKS AND PINTS WEATHER GUY: Little Beast’s logo pictures a beast eating a tulip glass full of beer. To me, that says it gives a crap. 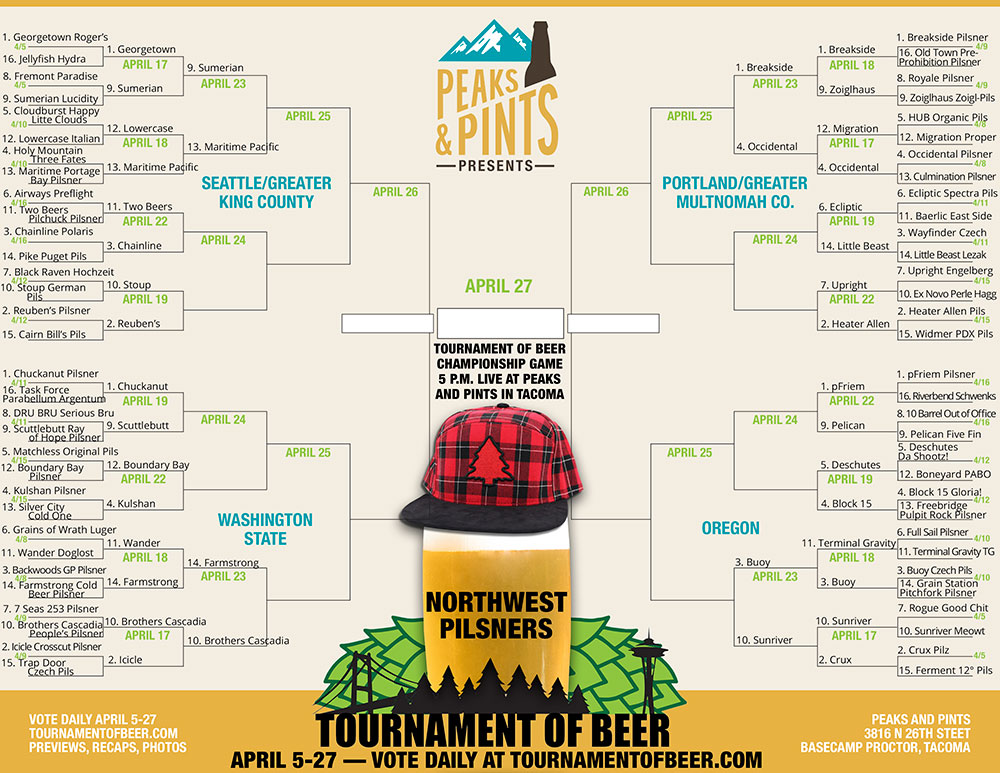