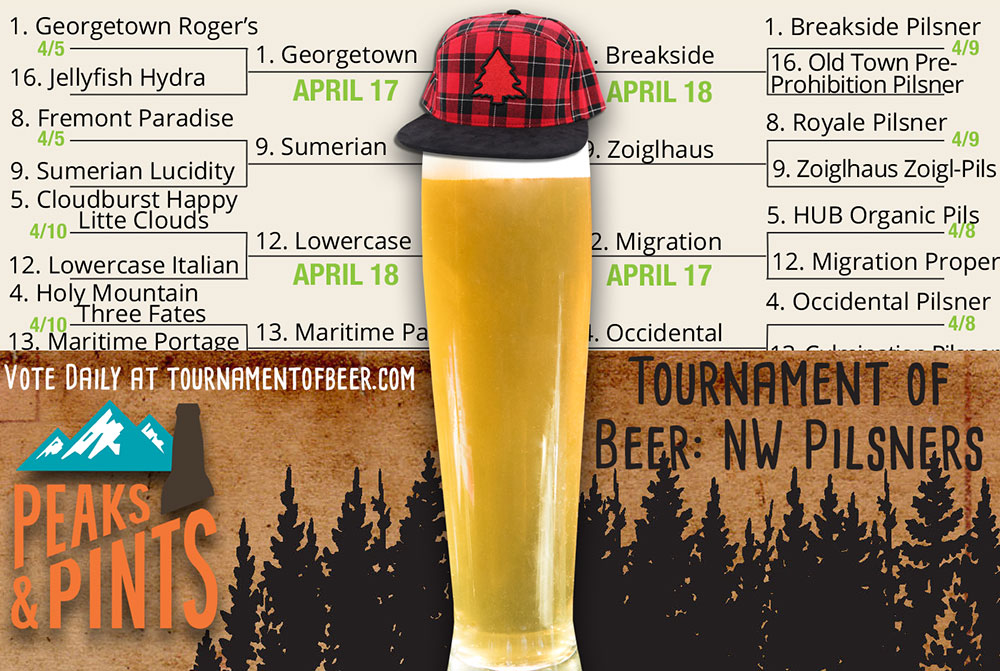 RON SWARNER: Now it’s getting exciting. The hops are really starting to fly, and the water is so soft that you’ll have to beat the Charmin bear off with a stick. OK, so that’s a horrible analogy.

Point is: This is serious.

Today, the Tournament of Beer officially kicks off its Second Round, meaning 32 pilsners remain, and the competition is as hot as ever. Who will be crowned champ Saturday, April 27? The path to pilsner greatness starts today.

PEAKS AND PINTS WEATHER GUY: My forecast calls for cloudy skies with peeks of sunshine in the afternoon at Palouse Falls State Park in Eastern Washington’s high prairie. High hovers around 66. Expect same conditions tomorrow. If gold is a Lands’ End catalog and a stack of Vienna Fingers rebates, I’m a leprechaun.

RON SWARNER: Here’s a look at today’s Tournament of Beer Second Round action and a recap of yesterday’s results. Take a deep whiff and get to voting. …

RON SWARNER: This game was a bit of a surprise. Yes, Two Beers Pilchuck Pilsner was seeded a couple notches below Tournament of Beer officials’ estimates and their Czech-style pilsner is exceptional, but to beat sixth seed Airways Brewing and their crisp, Pre-Flight Pilsners by two votes was a shocker. Chatter inside Peaks and Pints had Airways Pre-Flight Pilsner in the Final Four. The other Northwest pilsners in the Second Round need to sharpen their hops because Two Beers Pilchuck Pilsner is the real deal.

PEAKS AND PINTS WEATHER GUY: How many pilsners could a Pilchuck chuck if a Pilchuck could chuck pilsners?

It was a very physical game, a real battle, with brewers diving for loose hops and owners spinning rally towels. It had more intensity than the usual pilsner game. There was lots of enthusiasm and energy. Pike Brewing’s Puget Pilsner is young, dry hopped with Yakima’s bounty and brewed with Northwest grains but carried itself in a mature way. Chainline Brewing’s Polaris Pilsner has been around the block, on a bike of course, and has several medals hanging around its pilsner glass, but it scrapped like a young buck. It was a close game all day. When all was drank and done, an exhausted Chainline Polaris Pilsner flipped up the kickstand and headed for the Second Round.

PEAKS AND PINTS WEATHER GUY: Those Chainline cats are at Peaks and Pints tonight for our sold-out SudsPop event with musician Joe Rosati.

RON SWARNER: pFriem Family Brewer’s Pilsner came into the Tournament of Beers: Northwest Pilsners as a No. 1 seed and didn’t disappoint. pFriem led all morning with an average lead of 200 votes. At 3 p.m., when the soaking-wet windsurfers began hitting the Hood River bars, pFriem pushed it out of reach for Riverbend Brewing’s Schwenks Classic Pilsner. When the final buzzer rang, pFriem Pilsner had 80 percent of the votes and a slot in the Second Round.

RON SWARNER: Despite an early lead from 10 Barrel Out of Office Pilsner, probably from folks who left work early, Pelican Brewing’s Five Fin West Coast Pilsner and its large, devoted Oregon Coast fans proved too powerful in yesterday’s action, catapulting into the Second Round with 72 percent of the vote.

PEAKS AND PINTS WEATHER GUY: 10 Barrel should have taken it up to an 11.

OK, let’s do a quick liver-size check, then dive into today’s Second Round pilsner battles. Vote for one pilsner per game — (one computer per game). Voting for today’s pilsner battles ends at 11:45 p.m.

RON SWARNER: Both of these breweries have rabid fans and die-hard supporters, as well as worthy pilsners, so this craft beer match-up may be the most hotly contested of the competition to date. Roger’s Pilsner, the second beer introduced by Georgetown Brewing, is a reliable rendition of the style with Oregon grown Sterling hops, Bavarian Lager Yeast and never gets into foul trouble. Sumerian Brewing’s Lucidity Bohemian Czech style pilsner balances rich, complex German malts with a pronounced yet soft, rounded bitterness and spicy flavor from Saaz and Tettnanger hops. Tournament of Beer officials were impressed with Sumerian’s defense in the First Round. Mobile your base, Georgetown Brewing and Sumerian Brewing, and get out the vote!

PEAKS AND PINTS WEATHER GUY: It’s ironic that on this date in history: 1925, New York Yankee Babe Ruth has ulcer surgery because this tournament is certainly giving me one.

RON SWARNER: Brothers Cascadia The People’s Pilsner ousted seventh seeded 7 Seas Brewing 253 Pilsner in First Round action. Tacoma freaked. Tacomans emerged into the blinding daylight in a daze not sure to whether to start drinking a few hours early or head immediately to the nearest taco dispensary. Down south, Vancouver’s beloved Trap Door Brewing fell quickly after Icicle Brewing speared them with all the Crosscut Pilsners. Southwest Washington beer is kicking ass and taking names and Brothers Cascadia is certainly a big part of that movement. Their success brings the region up to an even higher level. But, Icicle Brewing has the entire Eastern Washington behind them, and the Leavenworth brewery is sharpening their Crosscut Pilsner to a fine point.

RON SWARNER: Migration Brewing’s Proper Pilsner is a crisp, clean, herbal German pils with lemony nose and moderate bitterness. Occidental Brewing went the Bohemian-style pilsner route with a bit of Bavarian pedigree —  crisper and more dry. I don’t know where I’m going with this; maybe you should just vote now.

PEAKS AND PINTS WEATHER GUY: Welcome to my world.

RON SWARNER: Both of these pilsners are strong and the marketing departments have a great understanding of how to play. The head brewers have exceptional pilsner IQ and defensive ability as well. Crux Pilz definitely has a shot to make a serious run at the championship. If you can concentrate and brew with 10,000 people on your lawn, you are a threat. Sunriver Czech Meowt hits all the right spots — bready malt flavor, light sulfur notes and an abundance of spicy-floral hop character. It’s going to be crazy along the Deschutes River today. 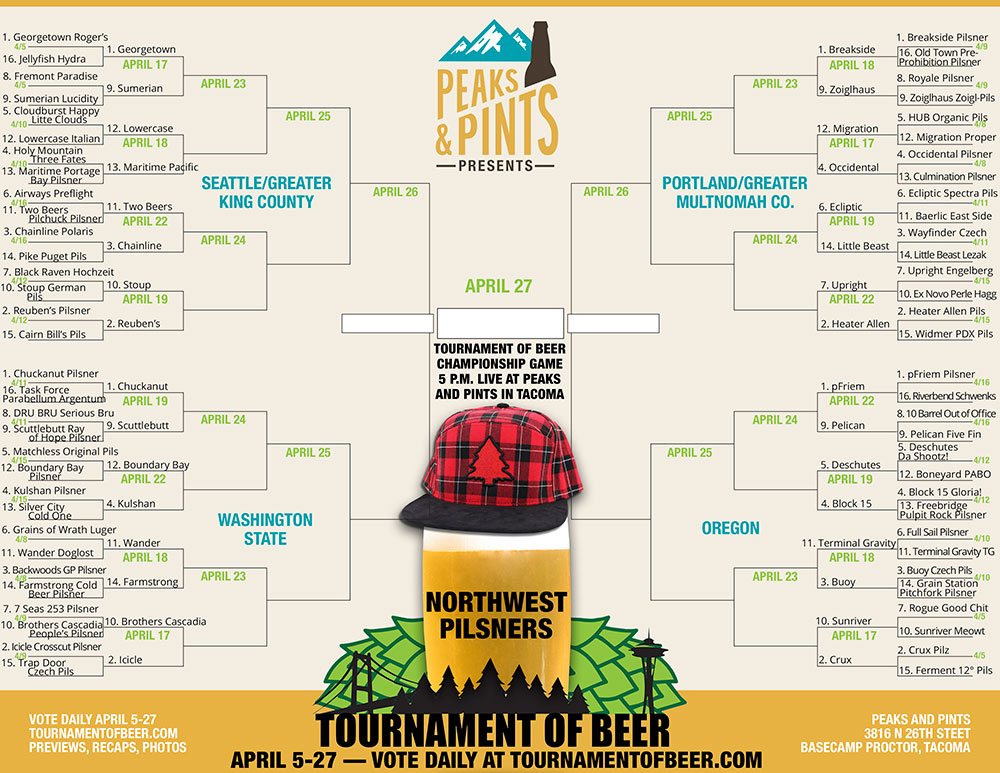