Top Rung Brewing has moved higher and higher up the ladder: Its beers can now be found on draft and in bottles throughout Western Washington, thanks to its sales executive Mike “BrewDad” Besser and recent addition to the Orcas Distributing family; it has doubled production every year, looking to brew 2,500 barrels by this time next year; it grabbed a gold medal at the 2015 Washington Beer Awards for its My Dog Scout Stout; and its barrel program is on fire, producing solid dark beers.

“The first year we were moving a million miles an hour,” says Sobol, who manages the operation, as well as assists head brewer Stoltz in the brew room. “The second year, we spent time refining systems and managing growth, maintaining quality — with a focus on long-term sustainability.

When Sobol wasn’t running a brewery or fighting fires, he was a student at ScaleUpThurston, a U.S. Small Business Administration backed program of the Center for Business & Innovation that is designed to accelerate companies to significant growth and expansion. 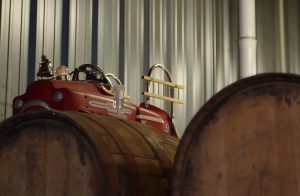 This coming year, Top Rung will accelerate production while control growth, hire new employees, including a cellar person, add a lab and build a new pilot system to test one-off beers in the taproom for future development, much like Deschutes and Hop Valley.

“We’re firefighters,” states Sobol. “We train for perfection. What we do and how we do it can make the difference between life and death. We have the same mind frame at the brewery. We strive for perfection. Jason is diligent about detail — he reads, he tests, he asks for feedback. We perfect what we have, then move on. There are significant differences in the first three beers we released. We fine-tuned them over the last two years. They’re solid beers. Now, we’re venturing into the barrels. … We might not be as sexy as some of the other breweries, and that’s all right with us. Our mainstream or flagship beers speak for themselves. We had 36 percent growth last year.”

It makes sense, then, that it’s time to celebrate. 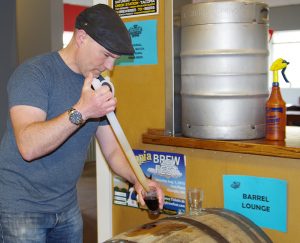 At its “2nd Anniversary Beerbalation Saturday Top Rung will release its Pyrolysis Imperial Stout in bottles. Pyrolysis, which is the thermochemical breakdown of organic material at elevated temperatures in the absence of oxygen, translates into dark, rich malt flavors and enough alcohol to warm you inside in the beer world. As a bonus, the brewery will pour variants of the Pyrolysis — a 6-month bourbon barrel aged version as well as the same stout aged 6 months in red wine barrels — for side-by-side comparisons. The party will also include a full spectrum of Top Rung brews, a special Randall and the South Bay food truck. For $7.50 you’ll a 10-ounce pour and a special anniversary glass.

“We couldn’t be happier and more honored with the response from the community during our first two years and we have big plans for year three,” adds Sobol.

Come for the Pyrolysis Imperial Stouts, stay for the perfect pairing s’mores. Either way, if you’re a fan of craft beer, make it to Top Rung Brewing Saturday, and bring an insatiable thirst.