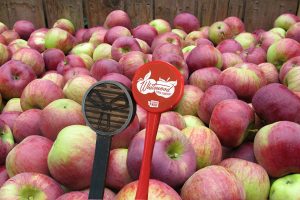 Traditionally, cider was an alternative to contaminated well water on our founding fathers’ agrarian homesteads, but today’s ciders span from bone-dry to syrupy bourbon barrel-aged options and weird, fruity varieties made with apricots and hops.

When his North Portland neighbor begged him to take his backyard apples off his hand in 2004, Nat West began experimenting with fermentation, turning the small green apples into hard cider. His friends went nuts. West would go on to hold weekly free cider parties at his house, experimenting on his friends, which ended up at 50 or so people. In the summer of 2011, West launched Reverend Nat’s Hard Cider, most likely the only cidery in Portland. In the late ’90s, west used to live in Olympia, and would hang out with Nathan Reilly.

David White started his production-only Olympia cidery in 2011, with his first cider release in 2012. In May 2013, Whitewood Cider Company opened for business in Olympia, the only craft cidery between Seattle and Portland. Owners White and Heather Ringwood, Whitewood pick Washington state heirloom apples such as Jonathans, McIntosh, Gravenstein, Winesap, Esopus Spitzenburg, Liberty and a few others for their current four ciders. White used to attend cider meet-ups with Nat West, and they frequently talked cider long before either of them went pro.

Three Magnets’ Cider Tap Takeover will spotlight four ciders from each cidery, consisting of both flagships and exciting one-offs. Cidermakers West and White will be on site to talk about their ciders. Flights of cider will be available, as well as cider cocktails. Three Magnets award winning executive chef Kyle Wnuk will also be creating special menu items to pair with the ciders. There will be door prizes given out, with swag from Whitewood, Reverend Nat’s, and Three Magnets Brewing.

Ciders On Tap from Whitewood Cider

Summer Switchel
Sweet – 4.6% ABV
Our Summer Switchel Cider is made with a cider base fermented from 100 percent Gravenstein Apples. Akin to a cider shrub it is full flavored, crisp and refreshing, and sweet, sour, and a little spicy all at once, and finishes clean. Best of all at only 4.6% abv you can drink enough Switchel to cool down and beat the summer heat. If you like Cider, Sour Beer, Radlers, Shrub or Shandys you are sure to enjoy Whitewood Cider Co.’s Summer Switchel Cider.

Northland
Medium-Dry – 6.8% ABV
Our Northland Traditional Blend is traditional as it gets. European cider apple varieties blended at the press, fermented through the winter, racked, blended again and matured into early summer. Lightly back-sweetened for balance and bring out fruitiness. Floral spicy sweet nose, with strong characteristics of sweet apple, stone fruit, ripe orange and a tropical fruit acidity and wine-like tannic/bitter notes balanced with a crisp clean finish.

Revival
Semi-Dry – 6.0% ABV
I start with a secret blend of Washington-grown apples and add piloncillo, dark brown evaporated cane juice purchased direct from Michoacan, Mexico. I ferment this dark base to all the way to dry using two exotic yeast strains: a beer yeast known for the round mouthfeel in Saisons and a rarely-used secret culture which produces aromas of pineapple, guava and peaches. This cider is brilliantly golden in color and deeply complex while remaining subtly familiar, with just the right amount of sweetness and acidity to be an everyday beverage.

Fresh Hopped Hallelujah Hopricot
Off-Dry – 6.7% ABV
Once per year, when the hop harvest is underway, I make a very special batch of my award-winning Hallelujah Hopricot using fresh-from-the-field Cascade hops. This version is a limited release and sells out quickly to all the hop heads. I buy hops from Crosby Hop Farm in Woodburn Oregon and have them in my tanks in under three hours. One week later, you can drink the result. Grassy, nutty, herbal, incredibly fragrant, this cider is quite a departure from my normal Hopricot.

Fruit of the Garden of Good and Evil
Semi-Dry/Chili-Hot – 4.5% ABV
A collaboration with Portland’s Burnside Brewing, this beer is 60 percent Sweet Heat, an unfiltered wheat beer brewed with Scotch Bonnet peppers and blended with apricots, and 40 percent Ghost Tepache, a unique blend of wild-fermented pineapples blended with Ghost peppers. Created as a 2015 Fruit Beer Fest exclusive, this is one of four kegs in existence.

The Passion
Semi-Sweet/Tart – 6.9% ABV
Grown exclusively in tropical climes, the passionfruit is dark purple when ripe and the interior is full of many juicy seeds. I combined the juice of this fruit with a blend of dozens of aromatic heirloom apples. The result is a supremely tart and mouth-puckering drink that is more akin to a berlinerweisse than apple juice. New for 2015, I’ve added extra depth and mystery by combining El Salvadoran-grown and hand-toasted coconut meat with double-fold Mexican vanilla extract (the Mexican variety is noted for it’s smoky subtleties).