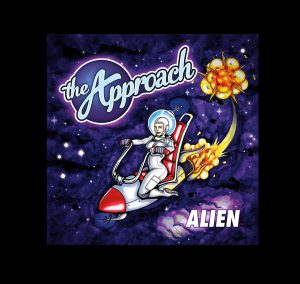 At some point this summer Pacific Brewing and Malting Co. sales executive Andy Kenser was hanging out at Half Pint Pizza Pub. Kenser digs this vibe in the joint, as well as the large selection of craft beer. He struck a conversation with employee Joe Abarca, who is also lead singer for Tacoma rock-reggae band The Approach. They chatted up craft beers and local music. Kenser is a fan of the band. When Kenser mentioned Tacoma brewery Wingman Brewers brewed a beer, Mighty HighPA, with local reggae band Mighty High, Abarca face lit up. With a thumbs up from Pacific Brewing head brewer and co-owner Steve Navarro, it wasn’t long after Joe and his brother — and band guitarist/bassist —Jeramey, were brewing their own beer and recording a song at the downtown Tacoma brewery. We caught up with Joe shortly after they brewed the beer, The Approach Pale Alien, which should hit Pacific Brewing’s taproom in early October.

PEAKS AND PINTS: Are you going to open your own brewery now?

JOE ABARCA: We had a blast. We helped add the hops. We cleaned up a little. We drank some beer.

PEAKS AND PINTS: What’s behind the name, Pale Alien?

ABARCA: We suggested to Steve and Andy that we’d like to stick to the theme of our latest album, “Alien,” which came out in May. Plus, Jeramey and I drink pale ales year round.

PEAKS AND PINTS: Steve Navarro says after seeing the CD artwork and the alien on a rocket, the first thing that came to mind was Galaxy and Comet hops in the beer. He says it was truly a collaborative effort with the band.

ABARCA: Yes, Steve was cool. Not only did he allow us to help brew, but he also educated us on the brewing process, explaining dry hopping and such. We liked the idea of a pale and wanted something with big aroma and flavor like their Citra. Steve used a bunch of Comet and Galaxy hops, which is awesome.

PEAKS AND PINTS: How appropriate, huh? Apparently this beer benefits a Tacoma organization too.

ABARCA: A percentage from beer sales will go toward Real Art Tacoma.

PEAKS AND PINTS: You also performed a song at Pacific Brewing and Malting Co., and captured it on video.

ABARCA: We called it “The Approach Sessions and Pacific Brewing and Malting Company.” Jeramey and I performed an acoustic version of “Easiest Question Hardest Answer,” the last song on our “Alien” album. Jack Saffle of webzine NorthwestDirtbag.com shot the video.

PEAKS AND PINTS: It’s great. We this be a regular series?

ABARCA: That’s not a bad idea.

PEAKS AND PINTS: When will The Approach perform next?

ABARCA: We hit it pretty hard this summer, so its time to reinvent ourselves. We have a show Oct. 18 at Jazzbones.