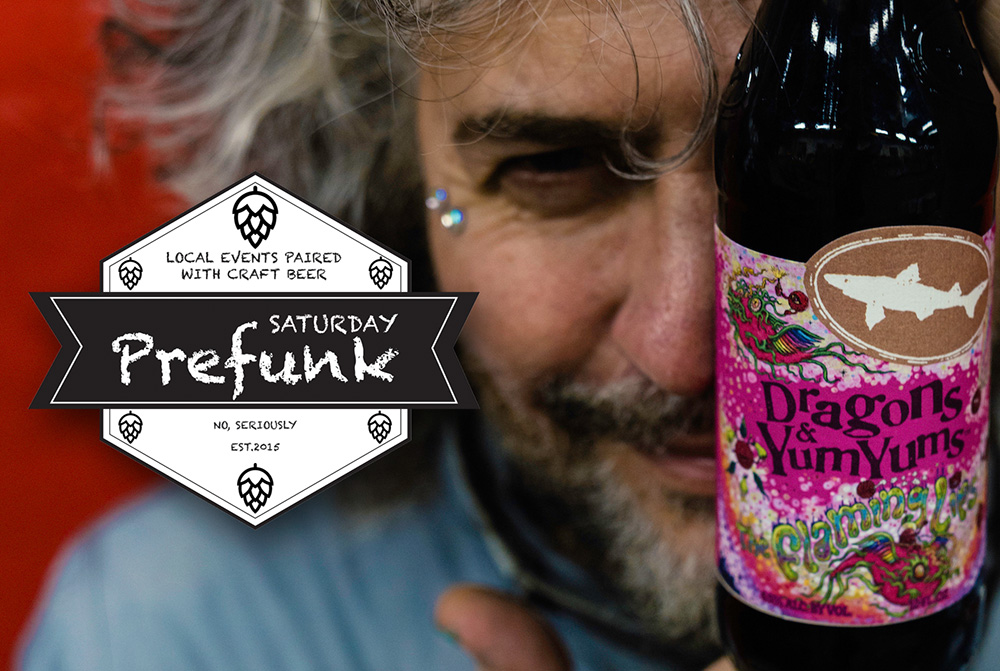 PREFUNK: Several years ago we saw The Flaming Lips at the Puyallup Fair. That was weird, but not as weird as when Lips frontman Wayne Coyne entered the stage through a giant vagina then began walking on the crowd in a human hamster ball while confetti filled the air. The band also re-recorded Dark Side of the Moon with Henry Rollins and Peaches on vocals. In a Rolling Stone interview, Coyne detailed an ayahuasca trip with Miley Cyrus. So really, a Dogfish Head beer made with the Flaming Lips seems like not that relatively weird a thing. Of course we’d be mistaken for thinking anything less. Called Dragons & YumYums, the pink brew is a tropical pale ale with flavors of pear, passion fruit, dragon fruit, yumberry and black carrot juice. Coyne was given a long list of ingredients to choose from. Which explains how black carrot juice made the cut. The ale was brewed in conjunction with today’s Record Store Day, when record stores throughout the States release unforeseen specials and curios. Hit the record stores then read the liner notes at Peaks and Pints while enjoying Dragons & YumYums on draft.

NOON TO 9 P.M. TOP RUNG BEERBALATION: Top Rung Brewing celebrates its fourth anniversary at the brewery’s taproom in Lacey. The “Beerbalation” will feature the release of its Anniversary Pilsner, limited release of our Raspberry Pastry Stout in bottles, special commemorative glass with beer of your choice, games, Wicked Pies Pizza food truck and more.

NOON TO 11 P.M. WINGMAN 7TH ANNIVERSARY: Technically, Wingman Brewers produced its first batch of beer in 2007. “The first batch of beer I ever made was a five gallon batch of beer with my fellow Wingman Derrick Moyer.  We got the itch for brewing then and opened our business with a one barrel of 31-gallon batch of beer in April of 2011 with a party at The Red Hot,” remembers Wingman head brewer and co-founder Ken Thoburn. Today, Wingman celebrates seven years with a big bash and the new 7th Anniversary Yuzu Milkshake IPA, Galaxy Brain Hazy IPA, Tournament of Beer participants P-51 Porter and P-51 Peanut Butter Cup Porter and other tasty Wingman beers.

7 P.M. PROCTOR GULCH STRING BAND: It’s all about the Proctor Gulch at Peaks and Pints tonight. Yes, the seven-piece Proctor Gulch String Band will perform its mix of traditional bluegrass, jam band classics and originals — and we’re all about it. We’re also all about the Proctor Gulch. We bet tonight’s crowd is all about the Gulch, too. If you’re old enough to drink craft beer, cider and wine, then chances are you have experienced the Proctor Gulch. You walked out your frustrations in it. You made out in it. You ran naked through it. You maybe even studied it. Today’s youth? Not so much. Post-Millennials don’t get out and taste the world, each other, in a real and tangible, dirt-under-your-toenails way. There is depression, isolation and misery and the cause, apparently, is right there in their hand — the smart phone, or rather, the social media apps for which smart phones, for teens anyway, function more like a syringe. But, we digress. Let’s cheer the Proctor Gulch with the Proctor Gulch String Band tonight. Maybe, even snap a photo with our phone.