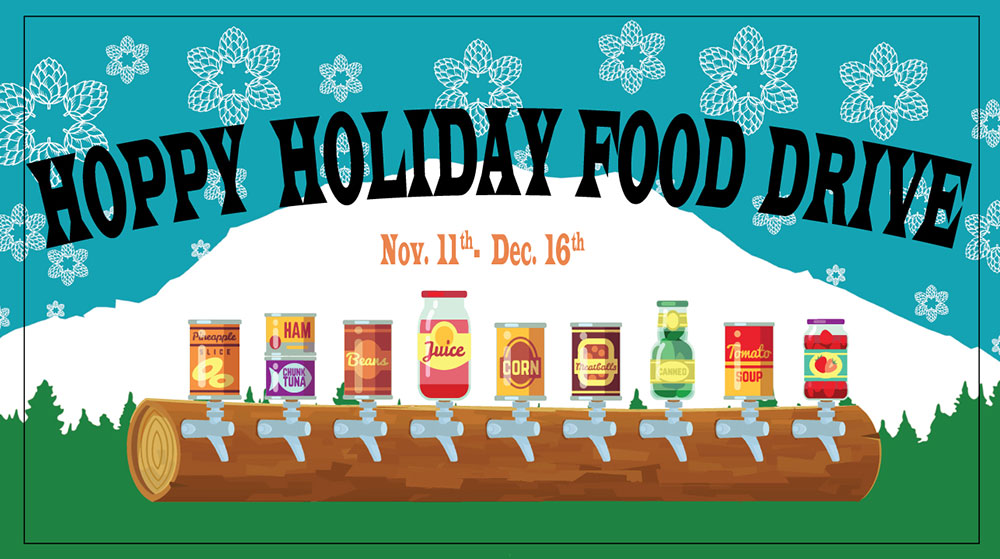 Most of us are either planning our holiday menus in our head or weighing where to make reservations.

But hundreds of Tacomans are not so lucky and are instead wondering where their next meal will come from.

The independent craft breweries in Tacoma feel fortunate, especially with the increase in competition. And they want to give back.

The Tacoma breweries support good causes in their communities throughout the year, but at the holidays they also band together to do more. When Douville Home Group and Peaks & Pints approached five such breweries with the Hoppy Holiday Food Drive concept, all five said “yes” faster than you can say “253,” especially when they learned the Emergency Food Network would be the beneficiary.

“7 Seas hosts Emergency Food Network campaigns all the time — that’s what we do,” explains Pete Giste, sales director at 7 Seas Brewing in Tacoma’s Historic Brewery District. “What thrills us with the Hoppy Holiday Food Drive is five Tacoma craft breweries coming together to do good.”

Indeed, Pete, your 7 Seas Brewing will be joined by E9 Brewing, Narrows Brewing, Odd Otter Brewing and Wingman Brewers — all with food bins currently in their breweries, culminating with a final food count at the Hoppy Holiday Food Drive Party Monday, Dec. 16 inside Peaks & Pints.

“I can’t express how lucky Catie and I are to have five of our favorite breweries and Peaks & Pints on board for this event,” says John Douville, co-owner of Douville Home Group with his wife and business partner, Catie Douville. “The event is first and foremost a gathering of community minded local breweries for the purpose of encouraging donations to the Emergency Food Network. The weigh-off and competition should be considered a side motivator while the real focus is about giving. These five breweries will have an amazing impact on providing food to those who need it most this holiday season.”

“Each brewery will have a donation bin at Peaks the night of the party,” says Catie Douville. “Not only is it a final food donation push for each brewery, but it will also be a chance to taste holiday beers from all five breweries, and win raffle prizes.”

The Hoppy Holiday Food Drive Party begins at 6 p.m. Dec. 16 with the final food donation count announced at 8:30 p.m. A trophy tap handle made by a local metal artist will be awarded to the brewery with the most food collected.

Giving back to charities is nothing new to Tacoma breweries. The chance to do so side-by-side during the holidays is the best kind of collaboration.