The Hawaiian Islands are known for several beverages: Kona coffee, Mai Tais, Blue Hawaiians, and pineapple juice come instantly to mind, but the Aloha State also produces delicious craft beer two blocks from the ocean in Kihei, Maui. What began in 2005 as a tiny local brewpub has grown into Maui Brewing’s multi-million dollar facility that serves its craft beer well beyond the Hawaiian Islands. Now, visitors can expect brewery tours, a tasting room, a full-service restaurant and bar, a retail nook, an outdoor patio with barbecue service and the four beers on Peaks & Pints’ to-go flight today, Peaks & Pints Pilot Program: Maui On the Fly. 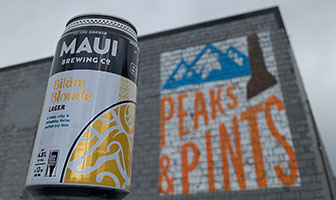 Maui Bikini Blonde isn’t a blonde ale; it’s a Munich helles-type lager, made with Pilsner and Munich malts and German Hersbrucker and some American German-style hops. The result is light and drinkable but not mindless: bright and crisp with a good deal of quiet, malty heft. Although it’s a little less hoppy than a pilsner, you detect lively hops as well as malt in the nose. On the palate, it enters crisp and even a little tart, and then round malty body appears. The finish is clean and dry, with a little residual malt sweetness. 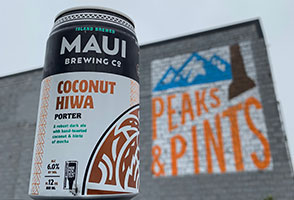 Brewed with hand-toasted coconut and six varieties of malted barley, Maui Coconut Hiwa Porter is a very dark, almost impenetrable, black coffee color. The aroma recalls baked coconut macaroons or, on the other end of the spectrum, coconut suntan lotion. The coconut flavor is present, but not overwhelming in the mouth, along with other roasted earthy lactose flavors. 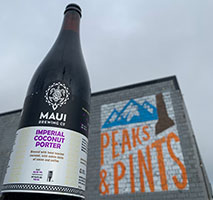 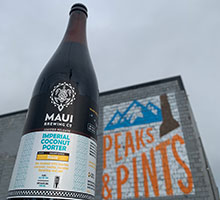 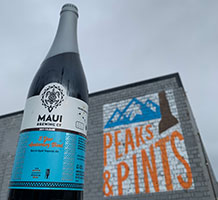