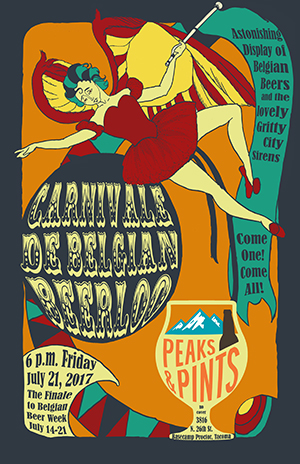 Did you know that June 18 was National Buy Dad a Beer Day? Neither did we! Here we are, preparing to celebrate National Belgian Beer Week July 14-21, and Dad had to be like, “Oh! Look at me! I’m special! I deserve my own celebration a month earlier to upstage all of you mere plebeian Belgians.” It wasn’t enough you put us on restriction from scarping your 1967 Plymouth Barracuda with our belt buckle, now we’re suppose to buy you a beer every year. That’s cool. You deserve it Dad.

Probably more than any other country, Belgium holds particular prominence to folks around the world who enjoy beer.  This young (1830) small (11 million people) country has centuries of brewing traditions built into its history. Belgium’s brewing tradition goes back well over a thousand years, when brewers used gruit rather than hops as the bittering agent for their beer; to this day, they still use spices and herbs in some beers, such as witbier. By the year 1000 AD, a tradition of abbey beer brewing had arisen in Northern Europe because most religious orders required their monks to support themselves. In the mid-1300s, Belgian brewers began using hops. By the 1600s, beer was not just brewed by monks, and beer making in Belgium was vibrant.

To generalize, Belgian brewers are not overly concerned with conforming to preexisting styles, which are casually interpreted. The Belgian approach to brewing is historically very artisanal. Belgian yeast strains are diverse and interesting yeast flavor drives many Belgian styles in the same way that the malt or hop ingredients drive most German styles. The Belgians often use “candi sugar” to thin and dry out the bodies of many of their high ABV beers.

Carnivale de Belgian Beerloo will be held at 6 p.m. Friday, July 21 in Peaks and Pints bottle shop, taproom and restaurant in Tacoma’s Proctor District. The night will present a unique opportunity to taste a wide variety of Belgian beers in a Belgium festival-like environment. We’ll have beer-flight passports, Belgian music, burlesque beauty and door prizes.