Historians believe that the pineapple originated in Brazil. It was imported to Europe later. It is also believed that Christopher Columbus and his crewmembers were probably the first few people from the European continent to have tasted the fruit. Members of European royal families soon developed a liking for it. It gradually became available to the rich, the noble and the elite. Popular wherever it landed, the pineapple was regarded as an exotic delicacy, even becoming a symbol of hospitality, as only the most generous of hosts presented their guests with a pineapple. James Dole did a lot to popularize the fruit and make it affordable with his pineapple plantations in Hawaii. Pineapple is the focus of our 2021 Washington Cider Week to-go cider flight today, a flight we cleverly call, Peaks and Pints Washington Cider Week 2021: Pineapple. 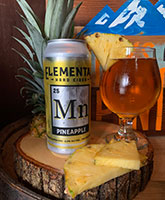 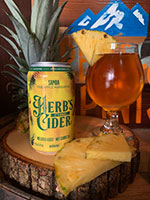 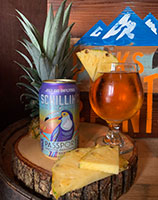 Schilling uses only 100 percent fresh pressed apples, locally sourced non-GMO ingredients, and individually hand-selected yeast strains with beer yeast rather than wine yeast (Schilling likes beer yeast rather than wine yeast for the malt flavor) as you enjoy this unfiltered cider made with juices of fresh pressed apple, pineapple and passionfruit. The nose arrives with huge pineapple and apple — granny smith and pink lady jump — with some lavender, rose petal, ginger, lemon zest and passionfruit. On the tongue, expect ample apple, passionfruit, and pineapple sweetness as well as a touch of citrus and sour bite.