MATT USHER: Well, whaddaya know! It’s mid-April, and dagnabit if all that “Madness” isn’t still in the air! What’s one to do with all that pent up “madness?” It can make for quite a dilemma. … Unless, of course, you’ve found something like Peaks and Pints Tournament of Beer: Northwest Lagers to help get you through. Hello Peaks & Pints Palls! I’m Peaks bartender and cook Matt Usher and through this month lager enthusiasts are voting on the Northwest’s best pale and light lagers in yeast-to-yeast match-ups here on peaksandpints.com. We started with 64 Washington and Oregon brewed lagers, and only one can be crowned king.

CLAIRE BRINICH: That’s right, Matt. The madness is alive — at least until April 30 when Peaks & Pints taps the final two lager at 6 p.m. The online voting stops at 5 p.m. and we take the voting live at 6 p.m. with the winner announced around 8:30 p.m. 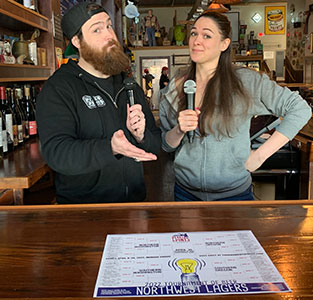 USHER: Holy Holy Mountain! I’m not going to lie; I was hoping Holy Mountain’s Holy Light would win so I could scream those words. Yes, indeed, Holy Light was anything but light in terms of play. The American light lager came at Lowercase so hard it knocked the capital letters off Lowercase’s Mexican Lager for several hours.

BRINICH: Holy Light ended up grabbing 66 percent of the vote and moves onto the Second Round.

>>> No running on the taproom deck unless it involves voting for Pool Dad in the Tournament of Beers.

>>> No splashing or horseplay, unless it involves knocking a Plainsman off a horse.

>>> Patrons must shower (while drinking Pool Dad Lager) before entering the taproom.

>>> No one leaves until you vote for Pool Dad Lager at peaksandpints.com.

BRINICH: Looks like everyone followed the rules. Seapine’s Pool Dad toweled-off with 59 percent of the vote and a date with Holy Mountain’s Holy Light in the Second Rose April 22. 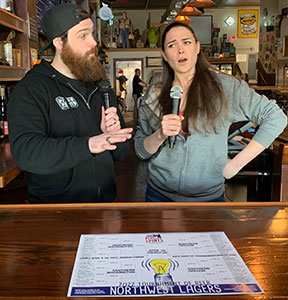 BRINICH: Yeah, OK, but Bend Brewing’s not currently available Red Ribbon Lager lost by only 15 votes. It was a fierce battle that I imagine tore that city apart. My guess is Bend’s Sparrows Bakery will be jammed pack this morning with those celebrating a Silver Moon win with bacon breakfast sandwiches and lavender lattes or seeking comfort with bacon breakfast sandwiches and lavender lattes.]

USHER: Damn! Now I want one of those combos!

BRINICH: Let’s wade through the chilled wort. The following are advancing to the Second Round: 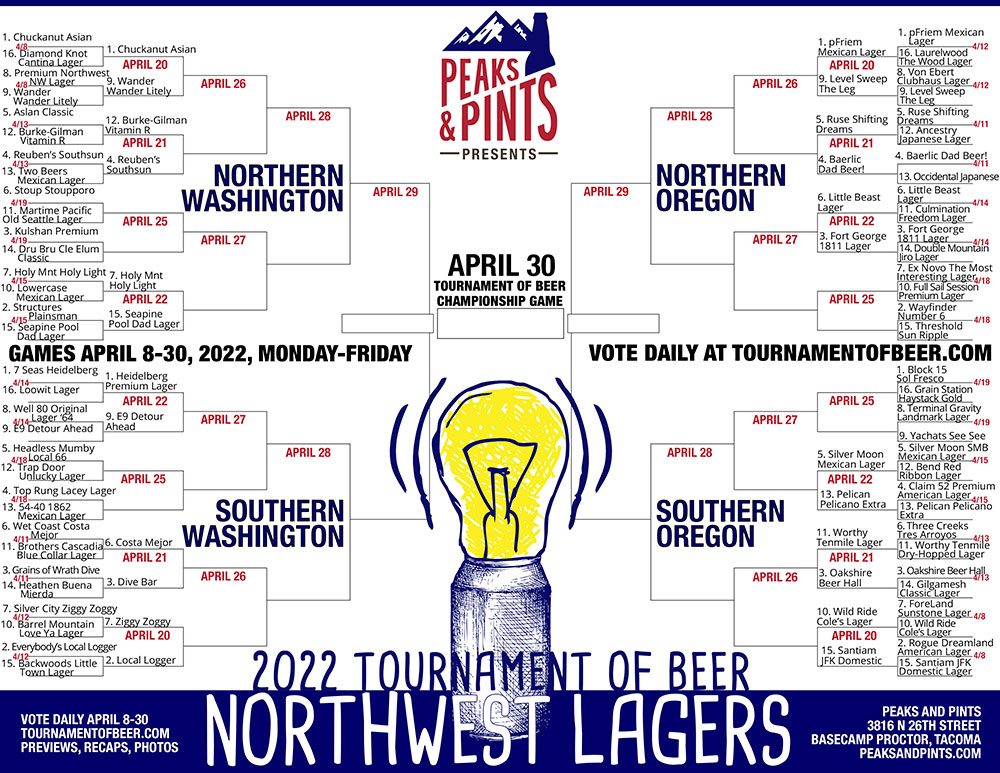