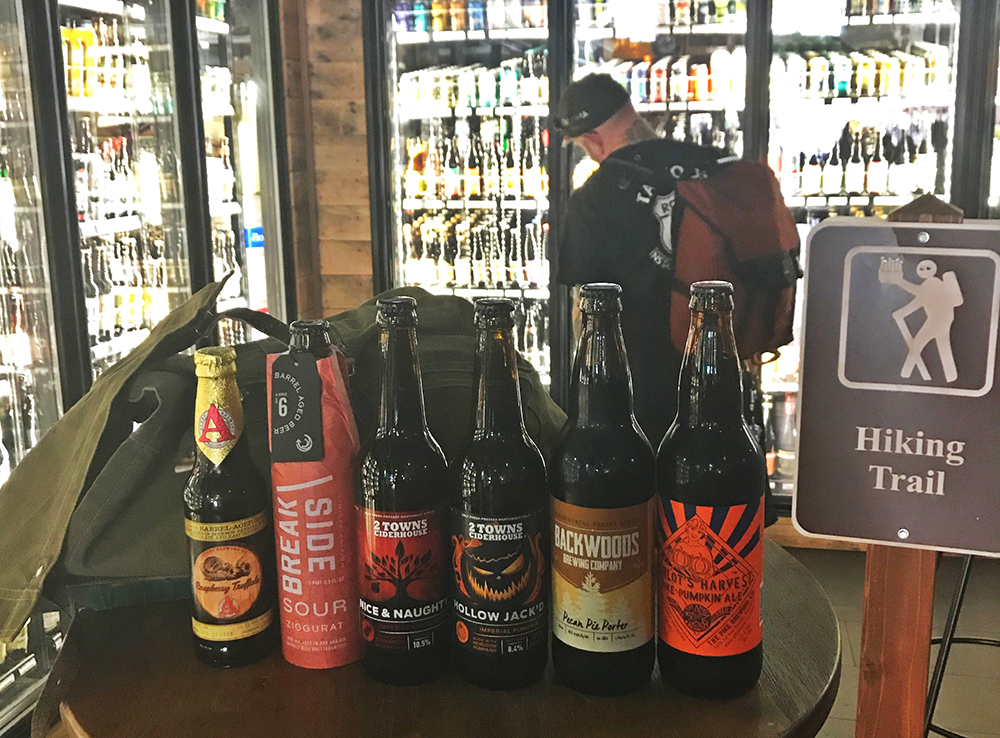 The leaves are falling. You’ve got a sweater on. Wait … not true. Yet, you can reach for you favorite fall liquid in Peaks and Pints’ cooler. Go with it. …

HOLLOW JACK, 2 Towns Ciderhouse: Hollow Jack kicks pumpkin-spiced lattes back into the patch. Made from A brew of fresh-pressed apples, caramelized pumpkin and sweet potatoes, it’s basically fall in a glass. The pumpkin flavor isn’t overwhelming, which is enjoyable and not too sweet. 6.4%, 16.9oz

NICE & NAUGHTY, 2 Towns Ciderhouse: Nice & Naughty spiced apple cider is Christmas in a glass. Cinnamon arrives first on the taste palate, and nutmeg in a close second with clove and honey bringing up the rear. Where’s the fireplace? Where’s the big, comfy sweater? Where are the presents? Oh, yes, Nice & Naughty is a present. 10.5%, 16.9oz

PECAN PIE PORTER, Backwoods Brewing: This mahogany-colored porter, brewed with whole pecans, showcases the nut’s earthiness in the aroma. Made with five different grains, including chocolate and caramel malt, this seasonal porter gives off subtle chocolate notes, complimented with hints of vanilla and pecan. Makes us want some ice cream to drizzle this on. 5.9%, 22oz

ZIGGURAT SOUR, Breakside Brewery: The Portland brewery selected 13 casks from its wood cellar, with the goal of producing a summery Brett-forward beer with vivid herbal undertones. The majority of the barrels contained a spontaneously-fermented wheat beer that spent its entire “life cycle” in wood with the remainder former gin and Pinot Noir casks — many that have been in Breakside’s barrel program for more than 5 years. The result is quite complex, with white wine barrels, oak, some acidity and tart stone fruits. 6.9%, 16.9oz