Peaks and Pints Pilot Program: Kolsch On the Fly

Peaks & Pints has been drinking a ton of stouts and double IPAs — after all, February is stout month at Peaks & Pints, and our upcoming Tournament of Beer is Northwest double IPAs this year. Today, we could use a clean, classic style. We could use a kolsch. Since the German pale ale didn’t just originate in Cologne, or Köln, it technically can only be made there — we should spell it “Kolsch” without the umlaut since, again, Kölsch is a Cologne appellation. Kolsch is made with ale yeast and is fermented warm, yet commonly aged at colder temperatures, making it a hybrid between the lager and the ale. A kolsch should be golden- to straw-colored, effervescent with subtle fruity sweetness, dryness, and a light- to medium-body. It’s crisp in hop character, but not bitter. Today, Peaks & Pints suggests a to-go flight of Kolsch — a flight we call Peaks and Pints Pilot Program: Kolsch On the Fly.

Peaks and Pints Pilot Program: Kolsch On the Fly 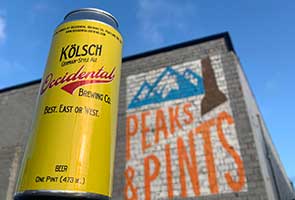 Occidental Brewing’s Kölsch reinforces that brewery’s reputation for making great German beer styles. The Kölsch is made with ale yeast and is fermented warm, yet commonly aged at colder temperatures, making it a hybrid between the lager and the ale. This is Occidental’s homage to the delicious ale of Cologne, Germany. It’s effervescent with subtle fruity sweetness, dryness, and a light- to medium-body. Crisp and dry, it is clean and lager-like, with a pleasant, slightly spicy hop profile supplied by German Perle. 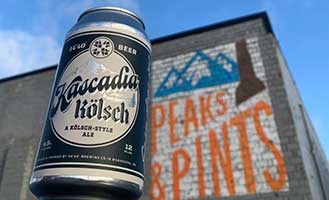 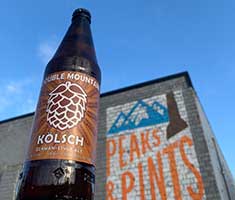 Double Mountain built its empire around Pilsner malt sourced from British Columbia. We’re a big fan of Pilsner malt — it imparts a definite smoothness to the brew, including Double Mountain Kölsch. A tribute to the style of beer native to Cologne (Koln), Germany, this beer is a very light straw pour with just a touch of haze and a decent egg-shell-white head. A little pepper crosses the nose along with sourdough bread, biscuit and light hops. Firm, tangy hops come through on the palate — Sterling and Perle — which is a nice combo of soft malt, fresh grain, spicy pepper and citrus. The finish is light and refreshing.