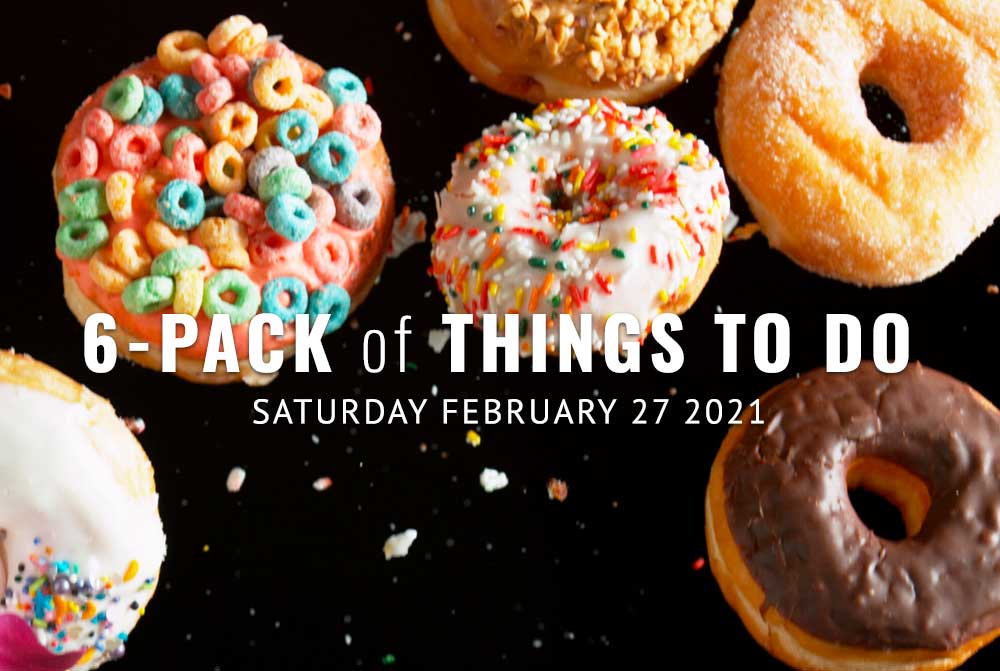 The last few days of February bring us closer to spring, closer to warmer weather, closer to getting your COVID vaccination and (theoretically) closer to “normalcy” — if you can even remember what that looked like. In the meantime, there are still events to keep you busy both in-person and in your house this weekend. Enjoy today’s 6-Pack of Things To Do.

FILM: The 8th Destiny City Film Festival is on! The 10-day virtual experience is much more than just video on demand — this is your chance to escape, to dream, and to experience another life that you’d always wanted or been curious about. With 18-plus hours of films and three free special events, this year’s DCFF will show you the human experience, then transcend you to another world. The Donut King, which tells the story of Ted Ngoy, a Cambodian refugee who arrived in Los Angeles in 1975 and changed everything we know about America’s favorite pastry, the donut, is one of the many films available to watch today.

BEER FLIGHT: After a six-month journey spanning 300 million miles, NASA’s Perseverance rover is roving around Mars. From CNN: “Perseverance is full of firsts. The search for signs of ancient life on Mars. The first helicopter fly on another planet. The first recordings of sound on the red planet.” NASA’s Mars 2020 Perseverance rover is be the agency’s ninth mission to land on the Red Planet. Along with characterizing the planet’s geology and climate, and paving the way for human exploration beyond the Moon, the rover is focused on astrobiology, or the study of life throughout the universe. Perseverance is tasked with searching for telltale signs that microbial life may have lived on Mars billions of years ago. It will collect rock core samples in metal tubes, and future missions would return these samples to Earth for deeper study. Back here on Earth, Peaks & Pints presents a to-go flight of space-themed beer — a flight we call Peaks and Pints Pilot Program: Space Beer On the Fly. 11 a.m. to 10 p.m., 3826 N. 26th St., Basecamp Proctor, Tacoma

FUNDRAISER: The Point Defiance Chapter of the American Association of Zookeepers and Drinking for Conservation celebrate International Polar Bear Day with safe, social distanced and family friendly Party for Polar Bears at Dystopian State Brewing Co. in downtown Tacoma. Authentic Mexican Food provided by RUCA Food Truck Washington. A portion of the proceeds will go to their polar bear conservation fundraiser. You can also join them for their online auction through Feb. 28. 5-9 p.m., 611 S. Baker St., Tacoma, no cover, donations accepted

TOUR: For the geologically curious, head to Littlerock, Washington,where hundreds of 4-to-6-foot mounds grace the prairie. Mima Mounds Natural Area Preserve has held its secrets closely for years, but Pretty Gritty Tours examines the top theories tonight. Was it freezing and thawing during the last Ice Age that caused the earth to form this way? Was it gophers or other land critters? Was it an extra-terrestrial occurrence? These are just a few of the suggestions for the bizarre formations of the Mima Mounds. 8 p.m., Pretty Gritty Tours YouTube, free

THEATER: Tacoma Little Theatre’s Page to Screen welcomes local playwrights an opportunity to have their scripts performed in a virtual staged reading. The latest production is Skin, written by Anamaria Guerzon, directed by Darryin Cunningham, and featuring some of the Pacific Northwest’s finest actors. Skin braids together two stories: one true story as a retelling from the past; and one fictionalized story in the present, to investigate the colonization of tattoo as an art form. Tacoma Little Theatre YouTube, free

FILM: Director Maya Zinshtein’s new documentary ‘Til Kingdom Come explores the unlikely ties between Israel and an impoverished coal-mining town in Kentucky. Specifically, the film follows the Bluegrass State pastors and their Evangelical congregants who believe the Jews are crucial to Jesus’ return. This film traces this unusual relationship, from rural Kentucky to the halls of government in Washington, through the moving of the American Embassy to Jerusalem and the annexation plan of the West-Bank. With unparalleled access, the film exposes a stunning backstory of the Trump and Netanyahu administrations, where financial, political and messianic motivations intersect with the apocalyptic worldview that is insistently reshaping American foreign policy toward Israel and the Middle East. The Grand Cinema streams ‘Til Kingdom Come in their Virtual Screening Room. $12 rental