Located in the Seattle neighborhood of Interbay, near the Magnolia Bridge, and started by friends Colin Lenfesty and Mike Murphy who worked in the local beer business, Holy Mountain might sit at sea level but its name gives nod to Mount Rainier, the ominous holy mountain that looms over Seattle, as well as a song and album by doom/stoner band, Sleep. Holy Mountain’s heart is its foudres and innumerable barrels, which churn out saisons and wild ales that tend to have mild sourness and stunning depth thanks to complex malt bills and a mix of Brettanomyces and local microflora. While Holy Mountain is built on a foundation of oak, they do brew other world class styles, which is the focus of our to-go flight today, Peaks and Pints Pilot Program: Holy Mountain Beer On The Fly. 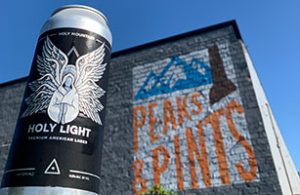 Holy Light is Holy Mountain’s premium American lager brewed with undermodified Moravian Pilsner Malt, along with flaked corn and rice syrup, to help lighten the body and lend a crisp and refreshing finish. It was lightly hopped with Willamette throughout and fermented with one of their favorite lager strains. Holy Light then went through a long, cold conditioning before packaging. It’s incredibly smooth with a nice sweetness. 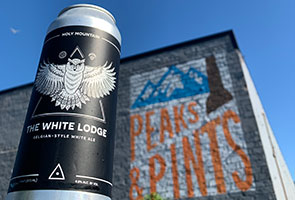 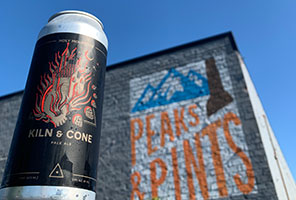 Holy Mountain released their first hoppy beer, Kiln & Cone, in 2014. It was initially their “House Pale Ale” in the taproom, and the idea was that each batch featured two different rotating hop varieties. This batch incorporates a simple combination of 2-row and Pilsner malts, with additions of malted oats and flaked wheat. Citra and Nelson Sauvin were used in the whirlpool additions in the kettle, and it was later dry-hopped with more Citra and Nelson Sauvin. Expect flavors of citrus, grapefruit peel, and pith. 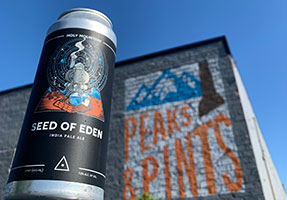 Seed of Eden is brewed with a blend of Pilsner and 2-row for the base, with additions of malted spelt and faked barley. It’s then hopped heavily with Sitiva Hop Blend provided by the Brewers Supply Group. Specifically made for IPAs, Sitiva Hop Blend has strong notes of ripe tropical and stone fruits, and underlying citrus-lime characteristics. 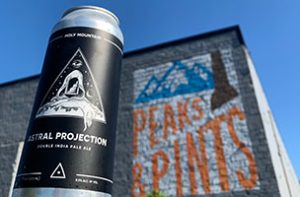 Brewed with Galaxy and Citra hops, this hazy IPA hits the nose with the strong perfume of citrus, tropical and herbal character. Sweet and succulent as the malts hit the front of the tongue, but the caramel, honey and candied taste is short lived as the hops quickly wins offering tangerine, pineapple, red grapefruit, passionfruit and lemon. Eventually, the succulence and sweetness expel and the piquant grassiness of hops lay a bitter film on the back of the throat.