Peaks and Pints Pilot Program: Hi-Wire Stouts On the Fly

College friends Adam Charnack and Chris Frosaker were working in other industries and home brewing on the side when they decided to take the leap at open circus-themed Hi-Wire Brewing in Ashville, North Carolina. As simple as clowns in a car, they duo decided to brew approachable lagers and ales that are easy to drink. They quickly became a center ring attraction. They grew 135 percent in their first year. They quadrupled production within four years. Hi-Wire has been awarded by some of the industry’s premiere beer competitions, receiving two gold medals at the Great American Beer Festival in Denver, a bronze medal at the World Beer Cup in Nashville, and numerous medals at the NC Brewers Cup. Where to hang the medals is a touch decision since they now own five taprooms, including one in a 27,000 square foot production facility. Today, Peaks & Pints shines the spotlight on Hi-Wire’s 10w-40 Stout line in a beer flight we call Peaks and Pints Pilot Program: Hi-Wire Stouts On the Fly.

Peaks and Pints Pilot Program: Hi-Wire Stouts On the Fly 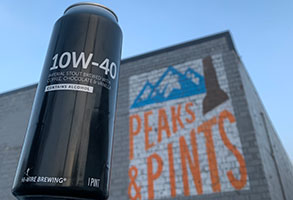 This is Hi-Wire’s OG imperial stout, which them have built many a variant. It’s brewed with coffee from Dynamite Roasting Co., chocolate from French Broad Chocolates — both in Ashville — Madagascar vanilla and lactose. This big, decadent stout is not motor oil, but rather full-bodied, sweet, and creamy. It pours an opaque dark with scent of milk chocolate and vanilla. The taste is balanced and easy to drink with sublte cinnamon spice mixed with cocoa and vanilla flavors. 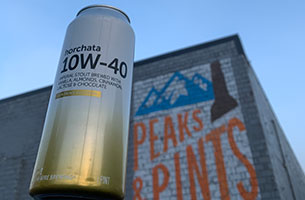 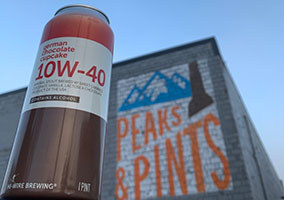