Peaks and Pints Pilot Program: Hair of the Dog On The Fly

People have been making pilgrimages to Portland, Oregon for Alan Sprints’ beer since the dark ages — back when hazy and sour beers weren’t made that way intentionally. His Hair of The Dog Brewing is proud to be one of the first breweries in America specializing in the production of high alcohol, bottle conditioned beers as well as experimenting with the barrel aging process since 1994. Sprints has 180 oak barrels used to age his beer from 6 months to 8 years. Today, Peaks and Pints gives you a taste of Sprints’ talent in a to-go beer flight we call Peaks and Pints Pilot Program: Hair of the Dog On The Fly.

Peaks and Pints Pilot Program: Hair of the Dog On The Fly 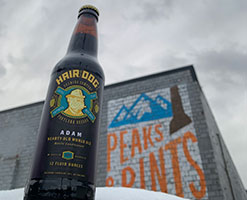 Hair of The Dog Brewing is proud to be one of the first breweries in America specializing in the production of high alcohol, bottle conditioned beers as well as experimenting with the barrel aging process since 1994. Founder Alan Sprints has 180 oak barrels used to age his beer from 6 months to 8 years. Inspired by the historical style Adambier from Germany, Adam is a strong, dark smoky ale aged for an extended time in barrels for deeply bready malt flavors layered with roast, smoke, and leather. It’s astonishingly complex and punishingly strong at 10-percent alcohol. 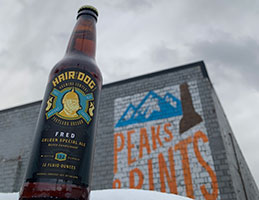 Fred Eckhardt’s book, A Treatise on Lager Beers, published in 1969, was the first modern book about beer. During his stint as the Oregonian’s first beer columnist he penned The Essentials of Beer Style, helping many homebrewers understand their craft and in turn helped launch many craft brewing careers, including Hair of the Dog Brewery’s Alan Sprints, who created an American Strong Ale simply named Fred. Fred, the beer, is a deep golden color. It is made with aromatic and rye malts and includes 10 different hop varieties — Northern Brewer, Progress, First Gold, Crystal, Fuggle, Willamette, Tettnang, Chinook, Spalt, Saaz and Strisselspalt for caramel, bitter hops, and some alcohol. 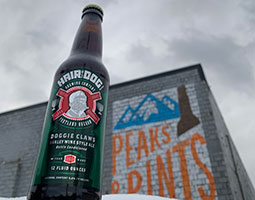 Doggie Claws, a holiday-themed barleywine, is brewed with Simcoe and Amarillo hops along with Organic Pilsner malt, British crystal and dark wildflower honey collected on Mt. Hood. It smells of thick, decadent caramel coupled with notes of raisins, molasses, and dark fruits. First sip brings a sweet caramel-raisin infused maltiness that carries hints of dark fruits, cherry, and sourdough. This is followed by a nice wave of piney, citric, herbal hop bitterness causing a nice interplay between the sweet and bitter aspects of the craft beer. 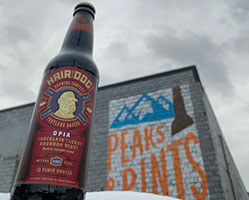 Alan Sprints invited Firestone Walker Brewing to Portland to create Opia, a chocolate cherry stout aged in bourbon barrels for a year. Expect bourbon and chocolate cake up from with a tart cherry finish.