Peaks and Pints Pilot Program: Gueuzerie Tilquin On The Fly

A small cadre of Belgian iconoclasts go on quietly stirring the imagination of brewers around the world, showcasing deliciously dry, hop-forward beers, rustic farmhouse offerings, bold and complexly balanced strong ales, and all manner of tart and funky brews, including the unparalleled sensory experience that is authentic lambic. Gueuzerie Tilquin is one of those iconoclasts. Pierre Tilquin founded the small family brewery based in Bierghes, Brussels, in 2009. He exclusively blends lambic beers, such as the one represented in today’s Peaks & Pints to-beer flight, Peaks and Pints Pilot Program: Gueuzerie Tilquin On The Fly. Tilquin purchases worts from Boon, Lindemans, Cantillon and Girardin, then ferments them in their own oak barrels. This allows for the blending — typically 50 percent one-year old lambic, 30 percent two-year old lambic and 20 percent three-year old lambic. 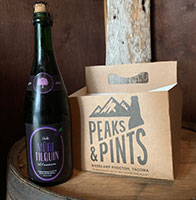 Peaks and Pints Pilot Program: Gueuzerie Tilquin On The Fly

The Mûre Tilquin à l’ancienne is a spontaneous fermentation beer obtained from the fermentation of fresh or frozen blackberries in young lambics, blended with 1-, 2- and 3-year-old lambic to reach a final concentration of fruits of 260-300 gr fruit per liter. It hits the nose with blackberries, slight funk, and even slighter citrus. Taste is full on blackberries with a medium sourness from middle to end. 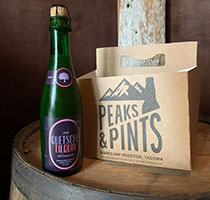 Tilquin Oude Gueuze á l’Ancienne was first made commercially available in May of 2011. The first round of bottles was released with a 2010-2011 neck label and subsequent batches have followed a similar pattern, including the 2019-2020 bottle of Tilquin Oude Gueuze á l’Ancienne that rests in Peaks & Pints’ cooler today. It’s a blend of 1-, 2- and 3-year-old lambic refermented in bottle for at least 6 months. “Oude” in Flemish or “à l’ancienne” in French is an appellation protected by the EU and is restricted for traditional Belgian gueuze in bottle. It pours a golden deep orange with a slight haze leaning more toward translucent. Orange citrus, tart lemon, dry clove, and soft wheat notes hit the nose, followed by tart lemon and grapefruit flavors up front, then soft wheat and sea salt notes on the finish. 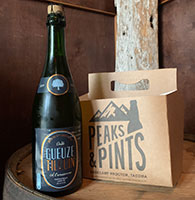 Oude Gueuze Tilquin à l’Ancienne – Cuvée du 10ème anniversaire is issued from a unique blend made March 7, 2019, and containing 20 percent 1-year-old lambics, 40 percent 2-year-old lambics and 40 percent 3-year-old lambics. Next, this gueuze is refermented and matured in the bottle for 2 years. 30 April 2021, at the occasion of the 10-year anniversary of Gueuzerie Tilquin. 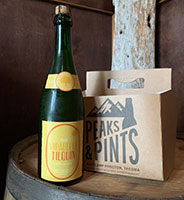 In 2021, Tilquin blended a new fruit beer, the Mirabelle Tilquin à l’ancienne, which is made from the fermentation of 240g of Mirabelle plums by liter of lambic. The nose has slight funk, stone fruit, and slight citrus, followed by reasonably tartness with flavors of stone fruit, slight citrus with funky oak, and a nice sweetness.