Today, July 26, is National Coffee Milkshake Day! Yes, you read that right. We’re not making this up. We couldn’t have asked for a more OG-friendly national food day — nor a better excuse to enjoy a tall, icy glass of creamy, coffee-flavored goodness. Yes, unless you’re living in one of the northernmost areas of the world or in the Southern Hemisphere, you’re probably cursing the summer heat at this point. The first thing you might think to do is crack open a classic lawnmower beer and sip away, but Peaks and Pints suggests something a bit more filling — and celebrating today’s national holiday — a coffee beer — or four. Stop by our craft beer lodge in Tacoma’s Proctor District and take home Peaks and Pints Pilot Program: Coffee Milkshake Day On The Fly. 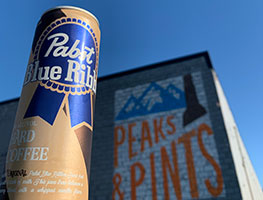 Pabst Blue Ribbon is known for lager. The Wisconsin-based brewery’s “premium” brew is many drinkers’ cheap beer-of-choice.  Last summer, Pabst dropped its newest brew: hard coffee. Pabst’s hard coffee is a malt beverage. The brewery makes a malt base and ferments it, then strips the basic spirit of all beer-like qualities, leaving behind a flavorless alcohol. Then, Pabst adds in a coffee made with Arabica and Robusta beans, milk, and vanilla for what tastes like a rich, creamy boozy Yoo-hoo. 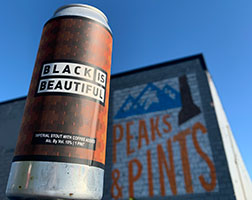 Two Tacoma small businesses have joined forces with the Black Is Beautiful campaign to provide an imperial coffee stout that fights for change. Wingman Brewers united with the worldwide beer collaboration launched by Weathered Souls Brewing to bring awareness to the social injustices faced by people of color every day. The Tacoma brewery teamed up with Tacoma’s black-owned Campfire Coffee, which proprietors Quincy and Whitni Henry roast their beans over an open flame, usually out in the woods(!). Profits from this smoky, toasty, roasty Black is Beautiful Imperial Coffee Stout will directly benefit the Tacoma Urban League, which has supported the local Black community for more than 50 years. Peaks & Pints will also donate all proceeds from Wingman’s Black is Beautiful Imperial Coffee Stout to the Tacoma Urban League. 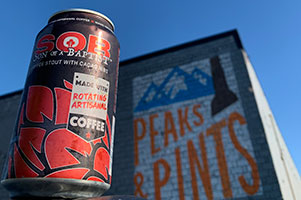 Epic Brewing’s Son of a Baptist is a coffee imperial stout. It is not barrel-aged like its father, Big Bad Baptist; instead its flavor profile is designed to highlight the complex and often unique flavors of small batch coffees. Peaks and Pints scored the Highwire Coffee Roasters version, which means the Oakland coffee company gave Epic their Bauhaus blend, adding bittersweet chocolate to the full and intense taste of dark malts and coffee. 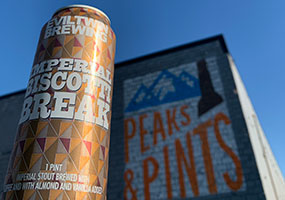 Jeppe Jarnit-Bjergsø contract brewed at Westbrook Brewing in South Carolina before moving his Evil Twin Brewing to New York City. At Westbook, he brewed his Biscotti Break, a gourmet imperial stout brimming with vanilla, coffee, almond and chocolate notes. This beer starts with a strong scent of dark chocolate and dark fruit, followed by plenty of dark cocoa and roasted bitter coffee — all with a rich coating of nuttiness. When you’re using flavors such as chocolate, coffee and almond it can be very easy to have a beer that is too cloying or tastes artificial, but that is not at all the case with this beer.