Peaks and Pints Pilot Program: August Oktoberfest On The Fly

The horror: having to drink good beer a month before we’re supposed to. … As the dog days of summer crest upon the beer world, a familiar collective roar gathers volume: Oktoberfest beer in August. The party began in October 1810, when a great horse race was organized to celebrate the marriage of Crown Prince Ludwig and Princess Therese of Saxe-Hildburghausen. Everyone had so much fun that it was held again, and eventually became an annual event, dubbed “Oktoberfest” in 1872. It has since evolved into a 16-day Munich blowout in late September and early October, when there isn’t a pandemic or World War. The party has evolved into Oktoberfest beers being released in August. Oh, to be in that great mass of humanity, dancing to the throbbing polka beats, scarfing down sausage, kraut, and strudel, and most of all, imbibing from the holy grail … er, stein … while the sun beats down on us. While Peaks & Pints annual Fresh Hoptoberfest is a month away we thought we highlight the early arrivals. Stop by our craft beer bar, bottle shop and taproom and grab Peaks and Pints Pilot Program: August Oktoberfest On The Fly.

Peaks and Pints Pilot Program: August Oktoberfest On The Fly 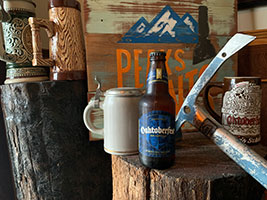 Firestone Walker Brewing’s Oaktoberfest is a twist on the German Märzen bier — a Paso Märzen, if you will. Traditional imported malts offer subtle honey-like aromas with hints of Noble hop spice. The stars of this brew are the imported Pilsner and Vienna malts that offer malty sweetness that carry through to the end. German Hallertau hops add rich Noble hop character to balance this Marzen. Pro tip: This beer is 100 percent stainless steel and gets the name Oaktoberfest as an ode to their hometown, Paso Robles, Spanish for “Pass of The Oaks.” 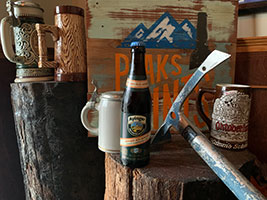 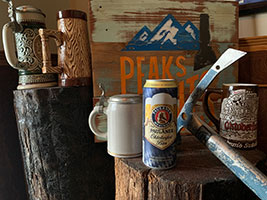 The Paulaner brewery is one of the largest breweries in Munich, Bavaria in Germany and is part of the Paulaner Brewery Group, which includes Hacker-Pschorr, Auer Bräu, Hopf and Thurn, and Taxis. Founded in 1634, Paulaner is one of the six brands allowed to be served at the world-famous Oktoberfest. “The glass is full of October sunshine, strong and golden. The perfect balance of a light taste of hops and a strong note of malt. A feast of a beer, which always goes down well. This beer is only brewed for the Oktoberfest season. That’s where it belongs, along with all the fun of the fair like the Ferris wheel and roasted almonds,” according to Paulaner Oktoberfest Bier hype.