Peaks and Pints Pilot Program: Ale Apothecary On the Fly

Founder Paul Arney and his team are focused on one thing at The Ale Apothecary — making truly unique beers, using strictly Oregon ingredients — including local barley, wheat, hops, barrels, and even the wild yeast drifting around the high desert air — aged in oak, waiting patiently for the right moment to express themselves. Ex-Deschutes brewer Arney bottle conditions his beer, allowing for natural carbonation and more complex flavors that are unlocked after further aging, and as a result, everything at their Bend, Oregon taproom is in bottles. And much of it is already spoken for through the brewery’s exclusive ale club, which has a running wait list of 100. A pile of The Ale Apothecary beer landed at Peaks and Pints. How about you drop by our craft beer bar, bottle shop and restaurant today for a to-go flight of Arney’s beer — a flight we call Peaks and Pints Pilot Program: Ale Apothecary On the Fly.

Peaks and Pints Pilot Program: Ale Apothecary On the Fly 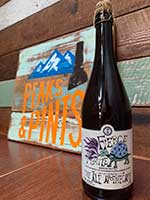 The Ale Apothercary sits in the mountains surrounded by trees for miles. They reinvent and relearn the ancient art of brewing, protected from the world much like a turtle inside a shell. Huckleberry Fierce Turtle wild ale is brewed within The Ale Apothecary’s nirvana surroundings — although the huckleberries originated from a roadside truck in Warms Springs Reservation. The berries are hand-harvested by descendants of The Original People. The huckleberries join the wild ale in oak barrels for a spell then bottle-conditioned with honey.

Blending is an important tool to bring a finished sour beer’s acidity and other components into balance, as well as to develop complexity and a nuanced flavor profile that can’t be achieved with one strand of beer alone. The Ale Apothecary blends select wild ales aged in two French brandy barrels on hundreds of pounds of second use sweet cherries, conditioned with honey, to create Cuckoo Bird. 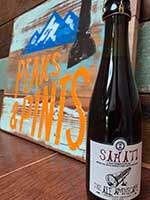 Beer writer Michael Jackson called Finnish sahti, “the only primitive beer to survive in Western Europe.” Sahati is The Ale Apothecary’s Pacific Northwest interpretation of traditional Finnish sahti that peasants learned to brew in the 1500s. Starting with a 2200-year-old Engelmann spruce tree felled on the brewery’s property, Arney created his own kuurna (an ancient Scandinavian lauter tun) to separate the wort from the grain during brewing. The bottom of the kuurna is layered with spruce branches; the needles act as a natural filter and impart resinous oils into the wort. The hollowed-out trunk of the tree also contributes spruce essence and structure from the raw wood. Brewed with barley and rye malts, along with a sparing addition of Goschie Farms Cascade hops, Sahati hits the nose with spruce, eucalyptus, wood, citrus, and subtle almond, and honey. The flavor follows the nose with subtle alcohol and a speck of mint. 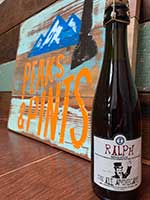 Arney’s great-grandfather, Ralph, was a pharmacist who worked in rural Eastern Washington. A wall in The Ale Apothecary’s taproom bathroom is decorated with prescriptions for beer that Ralph wrote for “patients” during Prohibition, one of the few legal ways to obtain alcohol in that era. The Ale Apothecary Ralph is brewed in honor of pharmacist-father of their founding brewer-artist. Mashed overnight in an oak vat, Ralph is made of Mecca Grade Vanora malt, Skagit Valley Caramel malt, aged Goschie Farms Cascade hops, water from their Skyline aquifer, and microbes and fir boughs from our surrounding forest. Open fermentation occurs in wooden vats prior to aging in Oregon Pinot Noir barrels from Domaine Drouhin. Over a year later, Ralph is transferred to a large barrel with fresh fir boughs prior to bottle fermentation with Oregon honey. The result is a restrained fir/herbal character in the nose and on the palate, with light lemony barnyard funk and a little pucker. 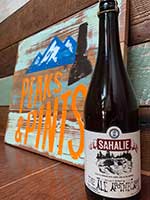 The flagship of The Ale Apothecary, Sahalie grabbed gold at the 2018 Brussels Beer Challenge. It’s brewed with local Oregon barley malt, wheat, and last year’s crop of Oregon Cascade hops, which are added to the boil copper for bitterness and dry hopped for a month in oak barrels. Hop bitterness and acid produced by Apothecary house lactobacillus culture provide the balance to the malt and oak structure of the beer, which is aged for a year in oak. Sahalie has a tropical and citrus fruit nose of apricots, pineapple, and orange produced from yeast esters and hop oils. The palate is tart and pithy, combining earthy and herbal undertones that evolve as the beer warms and opens up within your taster glass. 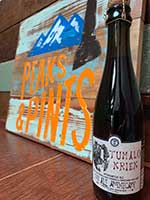 The picturesque Tumalo Creek is a tributary to the Deschutes River. Over the winter, it is blanketed by deep snow and during the spring is usually too swollen to fish well. It’s a popular spot for trout the other two seasons. Tumalo Creek is also The Ale Apothecary’s source for brewing water, which is a major ingredient of their Tumalo Kreik — a spontaneous wild ale aged in oak barrels with cherries and conditioned with honey. It’s a tart cherry forward fruit beer with just enough oak and funk to make it awesome. 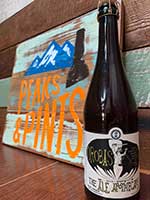 Fermented with equal parts barley and honey, honoring the early, mystical root of brewing, raw honey is added to Orobas’ wort in barrels for wild yeast to start fermentation. After 22 months the wild ale is transferred into barrels of Pinot Noir grape pomace from Domaine Drouhin for 7 months.  The result is a 100 percent naturally carbonated wild ale with honey made with 100 percent Oregon ingredients for a dry, grape, and floral sour ale with a tannic bite. 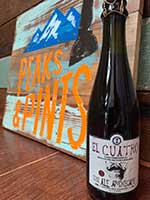 El Cuatro is made of barley and caramel malts co-mingling with Lactobacillus and Brettanomyces. After brewing and conditioning, the wild ale is transferred into brandy barrels to age for up to a year during an extended Brettanomyces Lambicus fermentation. Prior to bottling, the beer is blended with a small portion of year-old Sahalie, which houses the only hops added to this beer. Brandy barrels and wild yeast fermentation offer a plum and cherry fruitiness balanced by the slight toast of the malt body.