Contained in the genetic record of hops and cannabis White Lab Coats discovered that before 25 million years ago, there was only marijuana. And hops (aka humulus) evolved out of marijuana to chase moist creek beds, whereas cannabis remained perfectly content to stay in the dry savannahs. Cannabis and humulus (hops) are two types of the relatively small family of Cannabaceae. In blunt terms, cannabis and hops are cousins, both sharing a key ingredient called terpenes, which are mysterious and numerous. Hops tend to have a large amount of myrcene (a type of terpene) and varying amounts of other terpenes that “define” the hop whereas cannabis has less myrcene and varies more in its terpene profile from one strain to the other. Whether or not one person likes a strain or not often comes down to the terpene expression. Both hops and cannabis have a sticky icky resinous part that appears to be of similar terpene factories, but where marijuana makes cannabinoids, hops make alpha and beta acids. These glands contain all the brewing and/or medicinal value as well as all the terpenes. Enough of the science babble. What Peaks & Pints means to explain is 450 North Brewing brewed another batch of their crazy delicious smoothie sours and fruited Berliner weisses with each beer carrying a cannabis theme — and released on April 20. Stop by Peaks & Pints and grab a to-go flight of 450 North’s marijuana-themed beer — a flight we’re calling Peaks and Pints Pilot Program: 450 North Weed Cans On The Fly. 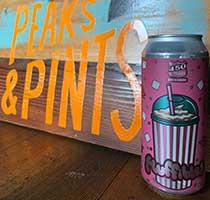 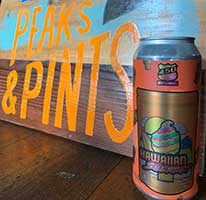 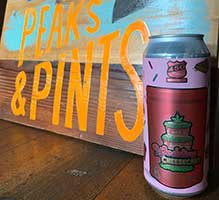 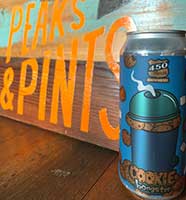 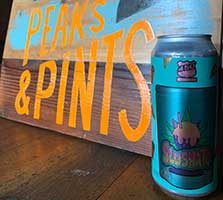