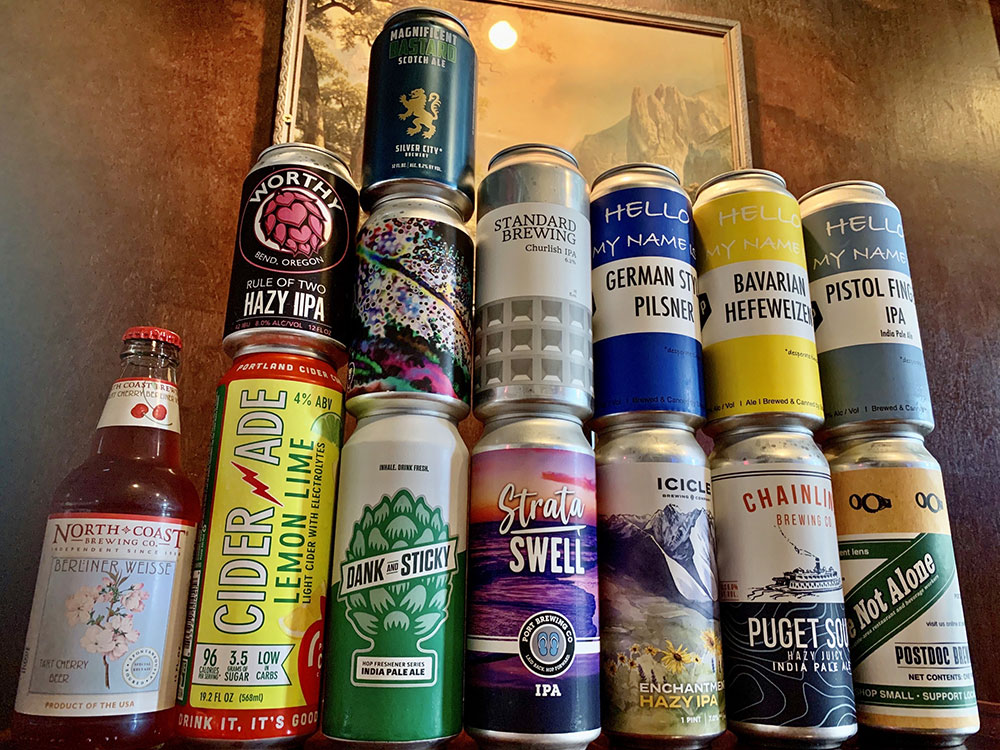 Another round of new beers and ciders have landed at Peaks & Pints just in time for the weekend. Peaks and Pints New Beers In Stock 4.18.20 includes beers from breweries that normally exist as draft only, but draft no longer rules the roost during these challenging times.

MOSAIC IPA: A two-grain IPA made with 100 percent floor malt from Warminster, England, and the ever-pungent Mosaic hop sourced from Yakima for a balanced body, copious hop resin, and silky mouthfeel. 7.2%

PUGET SOUND IPA: Chainline Brewing’s Puget Sound India Pale Ale was brewed for the Washington state ferries, offering a light, refreshing sipper while watching orcas swim by. But, these are tough times so the Redmond brewery let this hazy IPA sail into our bottle shop. Brewed with Idaho 7, El Dorado and the old-standby, Centennial, this double dry hopped juicy hazy IPA has tropical and citrus notes to take your mind elsewhere. 6%

ENCHANTMENTS HAZY IPA SERIES: TOKETIE: Toketie is a creek, lake and pass in Washington state’s Enchantment Lakes Wilderness. Enchantments is also a hazy IPA series by Icicle Brewing, a Leavenworth brewery on the edge of the Enchantments. Brewed with a massive amount of Galaxy, Citra, Azacca, and Simcoe hops giving it intense notes and aromas of passionfruit, citrus and peach, balanced by a hint of pine. 7%

TART CHERRY BERLINER WEISSE: Tart Cherry Berliner Weisse is made with the juice of Montmorency cherries sourced from orchards in central Michigan. It tastes like cherry pie. 3.4%

CIDERADE: Freshly squeezed lemons and limes brighten this cider made with 100 percent Northwest apples. It’s refreshing and replenishes with electrolytes sourced from sea salt harvested in Netarts Bay along the Oregon coast by Jacobsen Salt Company. 4%

YOU ARE NOT ALONE!: A new beer to support the service industry, You Are Not Alone is a smooth drinking hazy pale ale with bright berry, green mango, stone fruit, and complex herbal notes. 5.8%

PISTOL FINGERS IPA: Stoup uses resonate, pellets and cryo Mosaic pellets in this homage to the mighty Mosaic. While not a single hop beer, this beer screams Mosaic (mango and citrus aroma and flavor) from start to finish. 6.9%

DANK & STICKY: The inaugural beer of The Hop Concept brand, this IPA is crafted to convey the adjectives comprising its name, hopped with tons of C’s — Cascade, Centennial, Chinook, Comet, and CTZ (a Columbus, Topaz, Zeus hybrid) — as well as Amarillo, Mosaic, Simcoe, and the super sexy-sounding Experimental 05256. Those last ones have made a splash and bring on notes of pine, mint and stone fruit. All of that are apparent, along with the herbaceous little sumpin’ that earns the beer its “dank” descriptor. Melon is also pronounced at first sip, as is a sharp, almost peppery spike giving way to a resiny finish that goes for miles. As the beer warms up, a caramel sweetness plus notes of peaches and persimmons join the party. 8.5%

RULE OF TWO: This tangerine colored hazy imperial IPA uses a crazy blend of hops from Oregon, Washington and the Southern Hemisphere for a well-balanced, juicy IPA that bursts with heavy aromas of orange peel and grapefruit. 8%