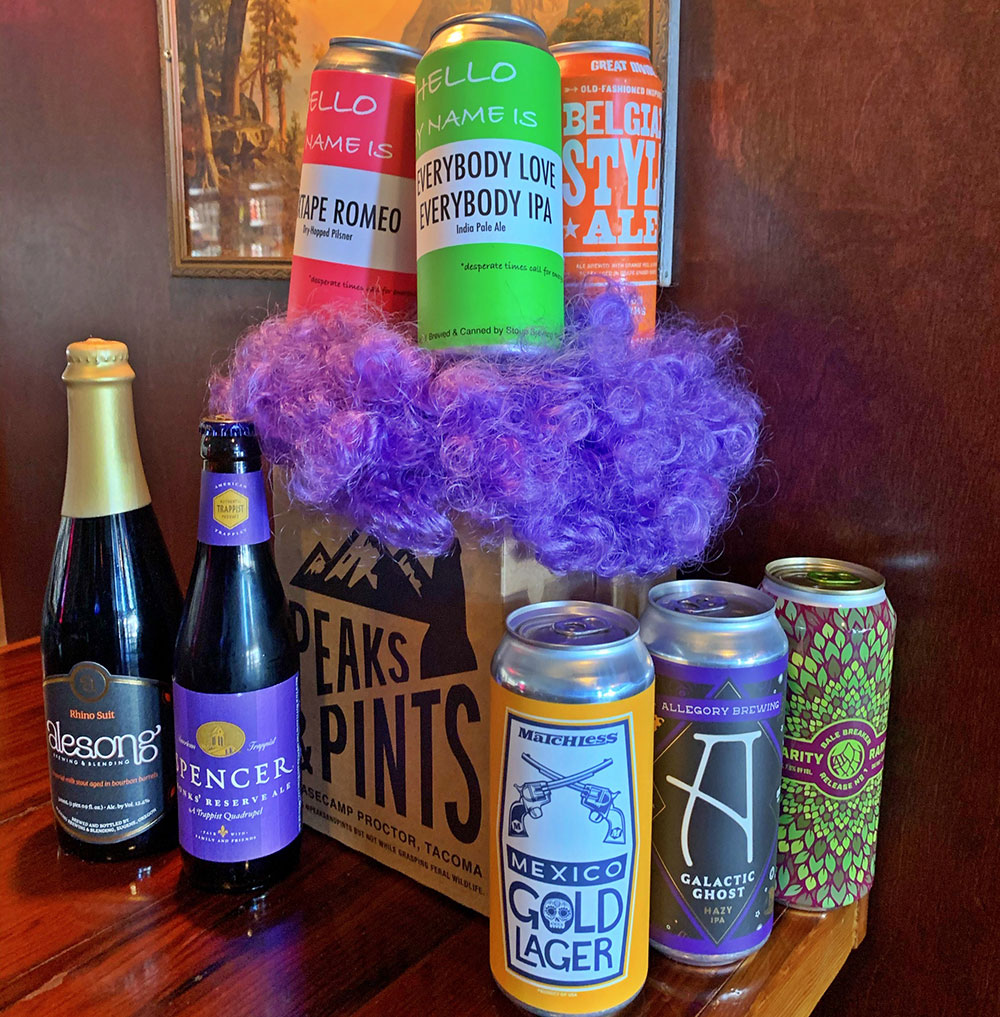 Peaks and Pints New Beers In Stock 4.11.20 has new craft beers to-go in our cooler for you to hide night around the house or yard tonight.

RHINO SUIT IMPERIAL MILK STOUT: A blend of the first two batches of beer brewed at Alesong, this imperial milk stout is matured in bourbon barrels to add velvety layers of vanilla, coconut, and bourbon to the sweet and chocolaty malt flavors of the base stout. 12.2%

WOOD WERKS OLD FASHIONED: Using a subtle Belgian yeast strain to create a malty, enticing base beer, this Great Divide Wood Werks offering reimagines a traditional Trappist-style dubbel. The beer is aged in grape brandy barrels for 10 months with orange peel and cherry puree for the beer version of an Old Fashioned. 8.8%

MEXICAN GOLD LAGER: This is the Tumwater brewery’s easy-drinking, Mexican inspired lager. It has a crystal clear appearance and goes down with a crisp, thirst-quenching ahhhhhh. 4%

MONKS RESERVE ALE: In January 2014, the 63 brothers of St. Joseph’s Abbey — about an hour’s drive west of Boston — sold the first Trappist beer brewed outside Europe. Spencer Brewery‘s Reserve Ale is a full-bodied classic Trappist quadrupel with a nose of dark malts, caramel, bread, raisins, figs, molasses, plums, cinnamon and herbal and earthy hops. The taste is sweet with strong notes of dried fruits and spices, while the background has a strong malty profile with notes of roasted malts, caramel and dark bread. 10.2%

EVERYBODY LOVE EVERYBODY: Smooth, moderately bittered IPA dry hopped with Belma, Strata, Galaxy and a touch of Sabro for strawberry, passionfruit and citrus flavors. 7.2%

MIXTAPE ROMEO: Stoup brewed this pilsner beer with pilsner malt for a light body and gentle malt sweetness. Then, they lagered it for several weeks to create a clean, refreshing crispness. As their mixtape final song, they dry hopped with Bru-1 and Nelson Sauvin for aromas of white grape and stone fruit. 4.9%