Super Bowl Sunday is certainly a day about football. That much is for sure. But it’s almost as much about craft beer. While many will be doing their American duty and watching the game on Peaks and Pints’ 130-inch screen while enjoying our sandwiches, others will indulge in house parties. If you fall into the latter category, many new and restocked bottled and canned craft beers arrived at Peaks and Pints this week to pair with your friend’s bean dip.

The deep red color comes from beets, which add a rich, earthy character that complements the chocolate flavor and aroma. The foamy head of the nitro pour is the “icing”, adding a creamy smoothness to the mouthfeel. But this liquid dessert still finishes like a beer – not sweet, but just as satisfying. 12oz, 5.5%

The base beer for Double Mountain Bourbon Chaos is a Belgian-style imperial stout that has been tucked away in bourbon barrels for over a year. According to the brewery, the aging has added notes of vanilla, caramel, and molasses, with a touch of fig and blackberry in the finish. 375ml, 11% 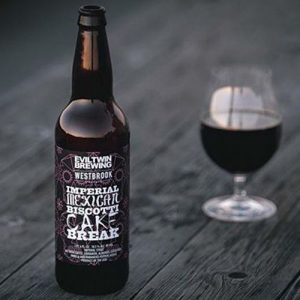 Meet the mashup of two highly sought after beers that is sure to instill panic in the beer geeks. Let the sweating commence. Evil Twin, that is building a brewery on its own in New York, has been contract brewing for years at Westbrook Brewing in Mount Pleasant, South Carolina – the birthplace of Westbrook’s Mexican Cake. “Cake” started out as a way to mark the brewery’s anniversary. Morgan and Edward Westbrook brewed an imperial stout with cocoa nibs, vanilla beans, cinnamon sticks, and fresh habanero peppers. Since then, the beer has become a hot commodity, selling in the secondary market for hundreds of dollars. Don’t even ask how much beer traders are asking for barrel-aged variants. Then there’s Evil Twin Biscotti Break. As the name suggests, this imperial stout mimics the coffee shop dessert, brewed with vanilla and almond, and coffee. Evil Twin Imperial Mexican Biscotti Cake Break slams together the best of both those beers. An imperial stout brewed with coffee, cinnamon, almonds, cocoa nibs, vanilla and habanero peppers. Both beers are awesome treats. 22oz 10.5%

pFriem’s Flanders Red is a show-stopper. This deep, layered beer spent 18 months in oak barrels, getting a little leather and a lot of tart cherry. There’s some raspberry and woodiness, and the finish is so dry it reminds us more of Pinot Noir than any other beer made in the Northwest. 12oz, 7%

This is a full-bodied beer; rich in Saaz hops and brewed following a 200-year-old tradition by Czech brew masters. This is a crisp, refreshing beer with less CO2 making it less filling but packed with flavor. A strong pale malt quality is evident in the taste profile. 12oz, 4.7%

With a larger-than-life hop aroma and citrusy notes, this Double IPA pours dark red in color. Crafted for the hop heads using Centennial and Columbus hops, this is a surprisingly crushable double. 22oz, 8.4%

New Beer Saturday list is just a small percentage of Peaks and Pints’ inventory. If there is something in particular that you are looking for, please feel free to give us a call at 253.328.5621. In addition, we pour growler fills from our Western red cedar tap log.