In 2008, Craig Campbell and his wife, Sharon, began experimenting with making cider from dessert apples grown in their 400-acre commercial fruit orchards. Today, they blend American heritage, English, and French cider varietals with dessert apples to capture the best of what each variety brings to the bottle: sweetness, acidity, tannin and aroma. They call their cidery, Tieton Cider Works. We call today’s to-go cider flight, Peaks and Pints Monday Cider Flight: Tieton. 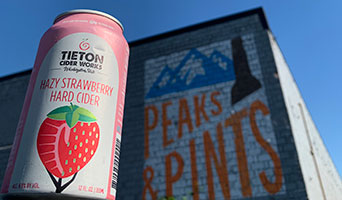 Unfiltered, cloudy-looking ciders are much like the hazy-style IPAs that have been taking the beverage scene by storm. When the step of the cidermaking process that filters these sediments out is yielded, it results in the clouded appearance of an unfiltered cider, fuller mouthfeel, and a richer flavor. Tieton naturally unfilters this strawberry cider with a ruby blush color. Sweet strawberry blends with fresh pressed tart cider for a balanced summer sipper. 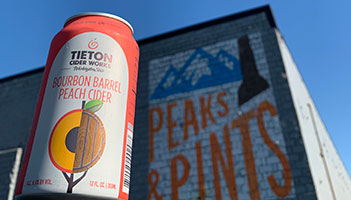 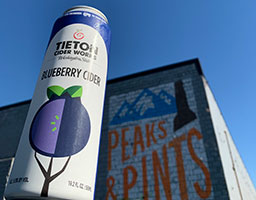 Tieton Cider Works has been growing apples in the Yakima Valley for three generations. Craig Campbell’s grandfather planted apple trees in the 1920s, but it was until 2008 when he and his wife, Sharon, began growing cider apples on their Harmony Orchards in Tieton, Washington. They launched Tieton Cider Works in 2009, with the intent to maintain their practices of being good stewards of the land. The Campbells pick blueberries from Washington’s rich volcanic soils for their Blueberry Cider. Crisp sweet blueberries upfront balanced with tangy cider apples makes for a thirst-quenching beverage. 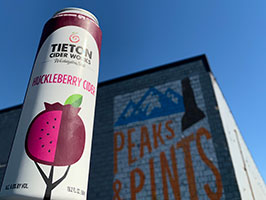 Huckleberries are one of the Northwest’s great wild crops. The Cascade and Olympic ranges provide this redish-purple berry top those who are willing to seek it out. Huckleberries are the summer ripened relative of the raspberry and blackberry, with a rich juicy flavor that fall somewhere between the two. Tieton’s Huckleberry is a blend of pressed Northwest berries blended with Washington state apples for a balance between tart and sweet.