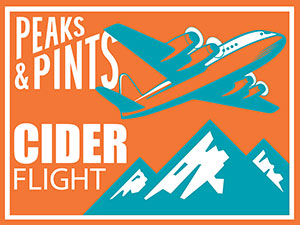 Chai, the Hindi word for tea, is the focus of this week’s Peaks and Pints Monday Cider Flight. A native product of India, masallah chai tea first hit the U.S. during the 1960s, when those seeking enlightenment in India would return with, if nothing else, a new beverage. Hippies first made the tea trend popular in Colorado and Santa Cruz, which is why sometimes it’s called yogi tea. Chai is also called Indian railway tea, a reference to the influx of Indians used by British colonialists to build railroads in Africa. Origin aside, chai can fill a room with whispers of cardamom, cloves, whole black peppercorn, cinnamon, and of course, the brewing of the dark brown loose chai before the gentle addition of milk and a warm stove top. Today, we feature chai ciders for our weekly cider flight. We’re calling our chai cider flight, Peaks and Pints Monday Cider Flight: Chai. 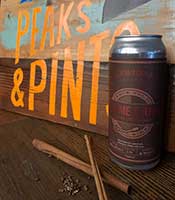 Newtopia Cyder co-founder and cyderist Rick Moreno got his start in the industry as co-owner of beer bar Toronado in Seattle. Cyder, the old English spelling, is co-owned by his wife, Jennifer Hays Moreno, who met Rick while working in the health care industry. The San Diego cidery sources apples and other fruits in nearby Julian and Temecula, and as far away as Santa Cruz, Hood River and Yakima. Rick developed his cider chops in his garage, then apprenticed with Newtopia’s “master cyderist,” Rusty Figgens, a member of the family that founded Washington’s famed Leonetti Cellar, who also knows his way around a distillery. At its most basic, Mexican chocolate is made from coarsely ground cacao, granulated sugar, and cinnamon. Chiles, nuts, and spices can also be worked into the mix, resulting in a complex, intense flavor. Newtopia’s cider version is made with chilis, cacao, and vanilla where chai spices and vanilla rule the flavor profile. 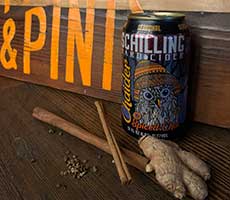 The name “chai” is the Hindi word for “tea,” which was derived from “cha,” the Chinese word for “tea.” The Hindi term chai means a mix of spices steeped into a tea-like beverage. Recipes for chai vary across continents, cultures, towns, and families. But the traditional ingredients of a spiced tea blend usually include black tea mixed with strong spices, like cinnamon, cardamom, cloves, ginger, and black peppercorns. The spiced tea mixture is typically brewed strong with milk and sweetened with sugar or honey. For Chaider, Seattle’s Schilling Hard Cider collaborates with Dragonfly Chai, Portland’s organic tea microbrewery, mixing Organic Dragonfly Chai Mix with fresh pressed apple juice and yeast. The appearance is hazy — a muted dark yellow. The nose is intense chai spices. The flavor is also fairly dominated by chai spices, however there’s a mix of vanilla, and sweet apples in there. 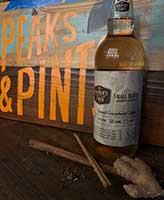 In 1895, on the West Coast, between Salem and Portland, Bauman Farms was first homesteaded by Elizabeth Bauman and her teenage sons, Stephen and Leo. Stephen eventually married at the cider apples on their Gervais, Oregon, farm, with the barrels in their barn fermenting the goods into hard cider. When beer production arrived with German immigrants, cider’s popularity diminished. But it was 20th century Prohibition that ended most U.S. cider production, including Stephen Bauman’s operation. The Bauman’s turned to dessert apple growing. His great granddaughter, Christine Walter, armed with a degree in biochemistry from Lewis & Clark University, revived her great grandfather’s hard cider operation, taking advantage of the family farm history spanning five generations, her work ethic growing up on the farm and modern-day cidermaking methods. She opened Bauman’s Cider Company in 2016, honoring Stephen Bauman on the cider’s branding. Her Spiced Grapefruit cider is lightly sweet made from apples, grapefruit, sugar, and chai spices cinnamon, cloves, cardamom, and ginger.