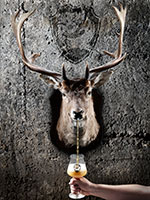 MAMA BEAR’S SOUR CHERRY PIE, Crooked Stave: An American wild ale aged in oak barrels with more than 3,000 pounds of Colorado sour cherries harvested on the western slope of the Rocky Mountains. It has a strongly acidic taste, but the cherry character is phenomenal. We also taste yeast, oak, vanilla, dough, and some caramel. 7%

After nearby wildfires forced Sierra Nevada Brewing to temporarily cease operations at its Chico, California-based production facility over the weekend, the craft brewery has resumed making beer. The country’s third-largest craft brewery also announced the creation of a fund to help those affected by the blaze.

In December 1998, Art Larrance opened Cascade Brewing and the Raccoon Lodge and Brewpub in Southwest Portland. Twenty years later, the brewery is recognized worldwide for its highly-rated Northwest sour ales. The brewery will commemorate its 20-year milestone anniversary with a celebration that will include the exclusive 750ml bottle release of Cascade’s Bourbonic Plague, one of its fan favorite projects.

The final beer release from Breakside Brewery’s 2018 Barrel-Aged Sour Program is now upon us. To close out this year of its wide spectrum of sour beers is Quiescence, a blend of 13 casks of wood-aged sour beer aged for 12 months in Pinot Noir barrels from Archery Summit.

FREE SOLO, The Grand Cinema: This highly praised, dizzying documentary reveals the heart stopping journey of Alex Hannold as he conquered Yosemite’s El Capitan wall without ropes or safety gear. One false move — hell, one slightly imperfect move — and Honnold will plunge to his death. To watch Honnold think through each ledge of his climbs can stop the heart; to watch him navigate human emotion might melt it. 2, 4:20, 6:35 and 8:50 p.m., 606 S. Fawcett Ave., Tacoma