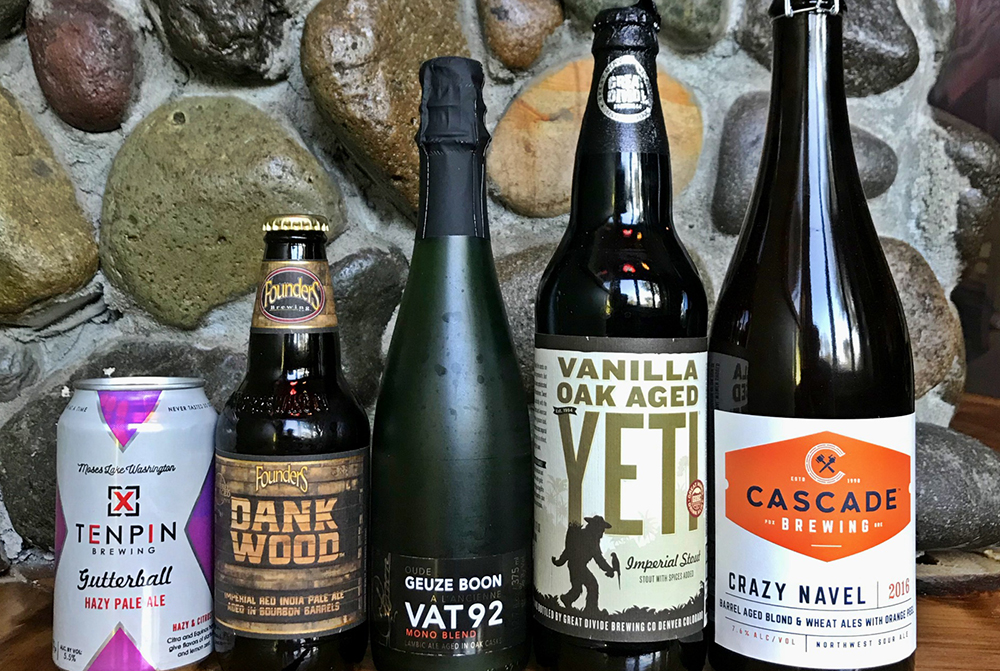 CITRA ASS DOWN, Against The Grain Brewery: As the name implies, this Imperial IPA’s main hop is Citra, a hop variety high full of tropical citrus aromas. The slightly cloudy honey-colored beer gives off a hoppy and citrusy aroma that, while not overwhelming, is heavy on orange. Citra Ass Down tasted pleasantly hoppy with cedar notes and a slight wheat taste at the end, no doubt contributed to be the orange hop aroma. 8%, 16oz

DISCO LEMONADE BERLINER WEISSE, Aslan Brewing: The light-bodied sour wheat beer is so delicious it deserves a disco song. With its bubby effervescence and tartness, the centuries-old Berliner Weisse style was called the “Champagne of the North” by Napoleon. Aslan’s version brings out hints of lemon, while the generous amount of wheat rounds out the body lending a remarkable similarity to lemonade. 4%, 12oz

ESCAPE TO COLORADO IPA, Epic Brewing: The IPAs from the West Coast are known for their hoppy bitterness. The East Coast versions showcase fruit flavors extracted from the hops — especially the juice-like New England IPAs bursting onto the scene. The “Colorado IPA is an amalgamation: golden in color with a fruity aroma and flavor paired with a bit of bitterness to balance the medium body and dry finish. Epic Brewing’s Escape to Colorado IPA is one of a handful of beers that bear the state’s name or invoke a location-specific quality. The name represents a story of the brewery’s move from Utah to Denver. Escape to Colorado IPA is a fruit and dank driven IPA dry hopped with Mosaic hops. Dip the nose for big fruity, citrus and earthy pine characteristics. The Mosaic hops provide the round, fruity citrus aromas, while the Simcoe hops are bringing fresh Evergreen to the nose. The hop flavor is medium to high and packs in more of those fruity, piney aspects in this ale. The high levels of bitterness are balanced by the sweet caramel-esque malt. 6.2%, 12oz

EXCELSIOR, Schilling Cider: This imperial bittersweet apple cider is a semi-dry to semi-sweet cider with notes of caramel and orange and hints of bitterness and tannins. 8.5%, 16.9oz

DANKWOOD, Founders Brewing: This bold imperial red IPA aged in oak bourbon barrel is a palate stunner at 12.2 percent ABV. Rich caramel notes emerge from the depths of the IPA, highlighting strong malt character while the bourbon barrel-aging develops the complexity. The spicy, piney, tropical complexities of Chinook, Mosaic and Simcoe hops come in at a smooth 65 IBUs that hit you right away with their dank aroma. A dank, sticky and slightly sweet sipper, Dankwood is the righteous alchemy of wood and hops. 12.1%, 12oz

IMPERIAL RYE IPA, Reuben’s Brews: This Ballard-brewed beer packs a significant punch in terms of alcohol content, but still manages to be dry and refreshing. The rye flavor is practically unnoticeable, but serves to dry the beer out on the palate and clear the way for the hop character. 8.4%, 22oz

LOS LOCOS LAGER, Epic Brewing: Troy Guard is a Denver chef with a Mexican restaurant so badass Epic Brewing can’t even put the name on their Los Locos Lager can. While enjoying Guard’s Rattlesnake Chorizo Guac they had a crazy idea: brew a Mexican-style lager with corn, natural lime juice and just a hint of salt. The aroma is lime tart, lime fruit, sea salt and clean pilsner malts. On the tongue, it’s simple and clean with the sea salt and lime prevalent on top of a fresh clean lager. The palate is light bodied, active carbonation with a clean, dry softly salty finish. 5%, 12oz

NEW ENGLAND STYLE IPA RECIPE #3: LUPULIN BURST, Epic Brewing: Epic was one of the last breweries in Colorado to give New England-style IPAs a shot when the company collaborated with Telluride Brewing in March 2016 on Blizzard Conditions, which they called “a snow globe in a glass” because of the beer’s hazy look. Since then, Epic has gotten fully aboard the haze train and just released NE Style IPA Recipe #3: Lupulin Burst, a hazy New-England Style IPA packed with juicy flavors of honeydew, guava, passion fruit and pineapple. They use an abundance of late-addition Mosaic hops and enormous hop back of whole leaf Cashmere with even more generous dry hop additions. It is without a doubt the hoppiest beer we’ve ever had from Epic, and it is the very definition of a “juicy” IPA. 7%, 12oz

PECHE FUME, Cascade Brewing Barrel House: This Northwest bitter ale is a mix of wheat ales brewed with cherrywood smoked malt and aged in oak barrels for as much as 14 months with Northwest-grown peaches. 6.8%, 750ml

RINO APA, Epic Brewing: Epic Brewing released RiNo APA, a juicy American pale ale in March. Their latest year-round can offering is inspired by what Epic has learned brewing New England-Style IPAs as well as the creativity and artistic passion they see in the River North neighborhood (RiNo) that is the home of their Denver brewery. RiNo APA is the reimagining of RiNo Pale Ale, one of the first beers Epic brewed to season their Denver brewhouse. It’s updated with loads of juicy, late-addition, Centennial and Mosaic hops, just a bit of haze to soften the mouth-feel and a bright burst of colorful tropical aromas. It’s juicy, hoppy and yet, approachable. 5.8%, 12oz

LINK: On Tap at Peaks and Pints today