Polish your clogs, tighten your lederhosen, strap on your mask, and get ready to join the city of Tacoma six feet apart for Peaks and Pints: Behind Fresh Oktoberfest, a 30-day celebration of fresh hop and Oktoberfest beers on tap and in the cooler for fresh hometoberfests. Das right! The pandemic changed our fourth annual mesh-up of fresh hop beers and Oktoberfest biers — from a giant hall party to a crowler-and-can lederhomestead. Through Sept. 30, Peaks & Pints will offer bright, fresh-hop beers AND clean, hearty Oktoberfest-style lagers on tap and in the cooler. We kick off the month with Two Beers Fresh Hop, Ayinger Oktober Fest-Märzen, and Pelican Brewing Bronze God on draft, plus other Oktoberfest biers in our cooler. Today, let’s feature the Oktoberfest biers with our to-go flight, Peaks and Pints: Behind Fresh Oktoberfest: Lagers. 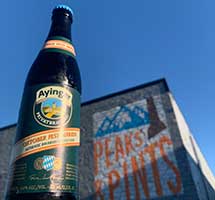 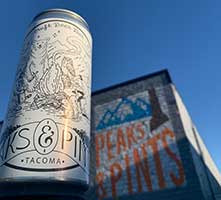 Pelican Brewing’s Bronze God was born in the homebrew kitchen of Head Brewer Jason Schlebach — and affectionately named in his honor. From the first batch made for his wedding — held in the Pelican Barrel Room like the authentic brewer he is — the delicious Oktoberfest lager features an abundance of rich, toasty, rounded malt flavors. With a vibrant copper-bronze color, this fest-style beer lures you in, while the clean finish, floral aroma, and moderate strength keep you coming back for another taste. 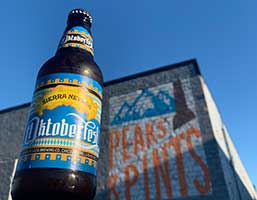 The pandemic prevented Sierra Nevada from traveling to Germany and brewing their annual Oktoberfest collaboration. Instead, the Chico, California brewery brewed their Oktoberfest 2020 in their state-of-the-art brewhouse with Two-row Pale, Munich and Vienna malts, Spalter and Spalter Select hops, and Lager yeast. Enjoy notes of fresh bread and floral, fruity character in this balanced, crisp lager. 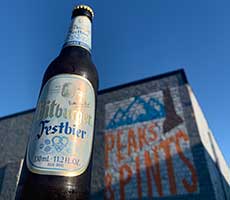 Bitburger’s leading brewmaster, Stefan Meyna, Ph.D., developed a specialty beer for this season and created a tasty Festbier for the United States. Bitburger Festbier’s malt composition includes Pilsner malt, Münchner malt and light Caramel malt, which accounts for its fine color and smooth body. Additionally, the beer is refined with Bitburger’s proprietary and unique hop blend called ‘Siegelhopfen’ (seal hops), which is sourced from a farm just a few minutes from the brewery. This full-bodied beer sports a slightly sweet backbone, while finishing dry. 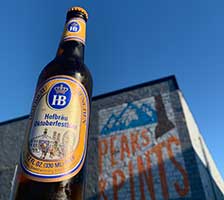