“At last Gandalf pushed away his plate and jug — he had eaten two whole loaves (with masses of butter and honey and clotted cream) and drunk at least a quart of mead — and he took out his pipe.” — J.R.R. Tolkien, “The Hobbit”

After a string of Hobbit films, and with Game of Thrones returning to the tube in April, mead-swilling characters from medieval environs abound. So it is with admirable timing that Chris Webber has lowered the drawbridge at his Lakewood Castle of Fermentation to cross the lands with his mead and cider. Webber — a lifelong National Guardsman and home winemaker, and a teacher of heraldry since 1970 — and his wife and damsel of genealogy, Cheryl, own and operate Dragon’s Lair Country Wines & Meads from their production estate of 230 square feet in Lakewood. As of this month, “Cider” could be added to their coat of arms. We’ll talk cider later.

As I sipped his winter Solstice Spiced Mead from the Skep & Skein Tavern in the land of West Olympia, I envisioned not drinking from bottle-poured pint glass surrounded by town folk wearing shorts and No-Li Brewhouse T-shirts, but rather handed a goblet of Webber’s Dragon’s Lair liquid Christmas, thanking the “Milady” with an attempted handshake converted to a hand-kissing via chivalric judo, then sinking into my comfy throne amid ceiling beams, loggias, woodwork and oil paintings.

“I’m going to offer the mead to the patrons at the bar,” said Webber, looking for permission from the Skep management.

“I would dub Webber my royal mead maker,” I dreamed, before snapping out of the sweet and warming haze of Long Beach born cranberries and holiday spices.

Mead, which is made of honey and water fermented with yeast, is perhaps the oldest alcoholic beverage in the world. Mead-making likely started when a sack of honey would catch some rain, which leads to fermentation. Consuming what’s in the bag would create a state of inebriation, which of course led people to experiment with making more. A process evolved.

Often associated with the Viking Age, enjoyed by the ancient Greeks and mentioned in Chaucer’s 14th-century Canterbury Tales, mead is having resurgence thanks to the craft brewing trend and the aforementioned “Game of Thrones.” But far from the sticky-sweet beverage sold at Renaissance festivals, modern mead is lighter in taste and can be consumed like a glass of wine or beer. Meads of the moment are carbonated and may be dry, semi-dry or sweet.

Before Webber made his mead mark, he was a young child living on a pioneer farm in Dayton, Washington, just northeast of Walla Walla. He would join his family picking wild apples, plums and elderberry, canning the goods to supplement harvests from their enormous gardens. A nursing job relocated his mother and the family to Vancouver, Washington, where Webber watched his mother evolve into a wine connoisseur, when he wasn’t hitting junior high curriculum. Soon, he was studying wine. (Cue time machine soundtrack.) After a long tour in Iraq in the mid-2000s, a tour through Chateau Ste. Michelle Winery and a wine kit purchase at the Puyallup Fair Webber became a garage winemaker.

A year later, in 2009, he grabbed first place for his Granny Smith apple and cinnamon stick wine at the Puyallup Fair.

Hanging out in online wine forums, a mead discussion broke out. Inspired, Webber made a batch of the industry standard Ancient Orange mead. He was hooked. So hooked, Cheryl and Chris founded the American Mead Makers Association, an industry voice for the close to 300 meaderies in the United States. Chris is a past president.

Webber made enough fruit wine and mead to fill a moat. Ditching the “Free Wine and Mead for Friends” model, he and Cheryl launched Dragon’s Lair Country Wines & Meads out for their Lakewood, awarded their federal license in February. Webber has begun self-distribution.

In addition to the delicious Winter Solstice Mulled Mead, Webber also has Rhubarb Alys Mead, Plum Crazy Mead and the recently bottled Elderberry Mead boxed in his delivery automobile. Like his wine, all the fruit is produced in state, with the plums out of Columbia County.

Webber subscribes to the low and slow method of making mead. He says a lot of mead makers come the craft beer world, with the idea of making mead quick and hot. He emphasizes meads is more like wine than beer. He ferments mead at a lower temperature for a longer period of time — two to four weeks, which is an extra 10 days. Webber then ages his mead for 90 days, which eliminates off flavors and mead “burn,” a metallic aftertaste.

“Cheryl and I are more about quality,” adds Webber. “It takes us a while longer to produce each mead batch, we we’re happy with our quality product.” 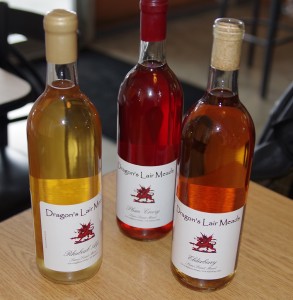 Dayton has always kept a firm hold on Webber. After his tour in Iraq, he’d reunite with his family in the town of his childhood. I could see the emotion in his face as Webber told stories of hunting with his father and brother followed by foraging for wild apples, plums and elderberries with his mother and sister. One foraging day he stumbled upon Warren Orchards. Owner Bill Warren went to school with his sister. A relationship was formed. Cider became a topic.

Cider isn’t a stretch for the history-loving Webbers. Hard cider, some historians claim, dates back to the 10th century. The English drank cider at least 1,000 years ago. Cider sailed over on the Mayflower, and Johnny Appleseed definitely wasn’t thinking dessert when he scattered all those seeds across the land. Cider is also the kindest of the do-it-yourself homemade alcoholic beverages. Beer must be cumbersomely boiled, wine is expensive, and poorly distilled spirits can blow up your house. Hard ciders range from dry to sweet, but always with a tang. They may or may not be carbonated.

The Webbers moved their wine and mead company under a parent company titled “Outlanders Keep”, with the addition of their first batch of hard cider last month. “Dragon’s Lair Country Wines & Meads & Ciders” would be longer than Cersei Lannister’s Walk of Shame. Made from a blend of Yellow and Red Delicious, Cameo, Braeburn and Honey Crisp apples from, you guessed it, Warren Orchards, the Webber’s cider will ring in at 7 percent ABV, with just a hint of sweetness and a little fizz when it hits his delivery car.

Looking ahead, the Webbers are thinking of moving into a larger space, but for now they’re busy making mead and cider in their tiny castle. Outlanders Keep doesn’t have a taproom, yet, but will gladly open its garage doors by appointment; email Webber at chris@outlanderskeep.com. You can guess the website address, where you’ll find a link to the Facebook page.