Mix-A-Six: From Dark to Light 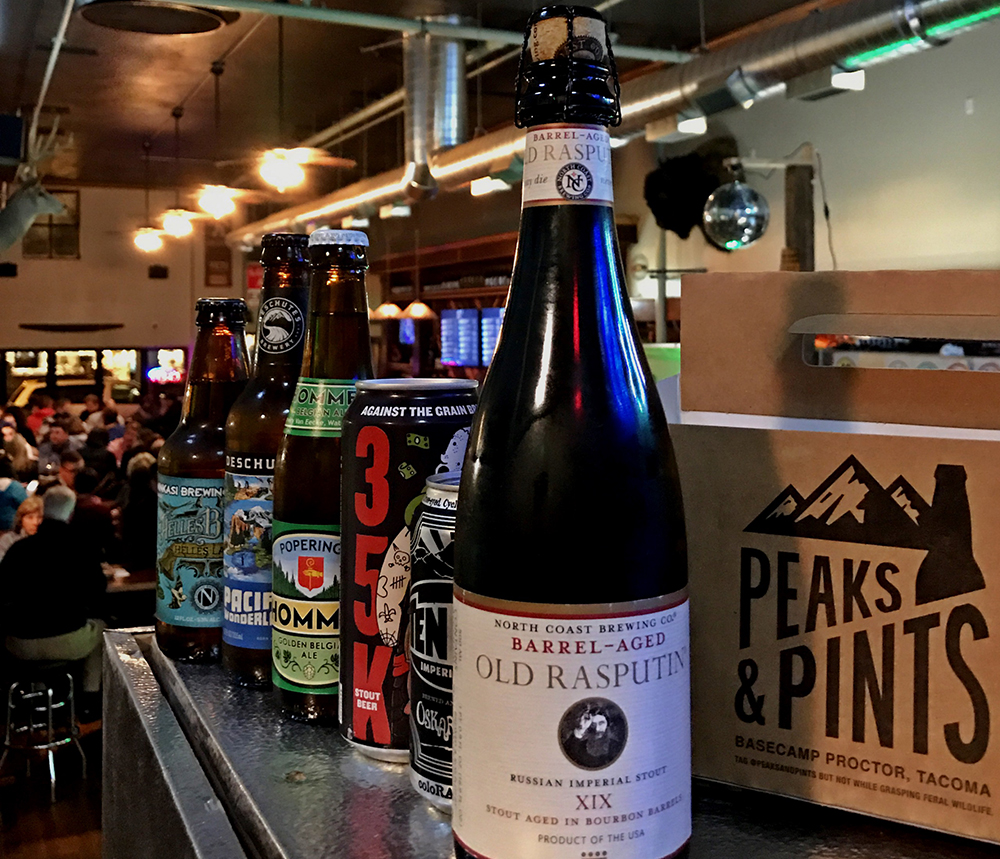 Head to Peaks and Pints’ cooler and create a six-pack.

There are boastful stouts with a bitter bite and modest stouts that are like silky milk chocolate. Oskar Blues Ten Fidy is at Camp Bitter, and the marshmallows have been held over the fire too long, as the nose tells us. There are definitely layers of malty sweetness, but this beer is so roasted, and so hoppy that it comes off as bitter as hell, like the darkest chocolate matched with the blackest coffee kind of bitter. Speaking of dark, make sure you have some White Strips handy. It’ll paint your kisser black. 10.2%

In true Russian Imperial stout fashion, this lady comes forth with a boatload of roasted malt that presents itself as espresso and chocolate on the palate. Aged nine months in 12-year-old bourbon barrels, this North Coast Brewing beer is a blitzkrieg of bourbon aroma that would make Bukowski proud. Dried fruit and lingering char and vanilla from the barrel arrives as it warms. Grab the whiskey-smitten drinkers who also have a thing for bittersweet chocolate and go into the side room where only the people that get it will get it. 11.2%

AGAINST THE GRAIN 35K

Well stay on the dark side here. Literally and figuratively. Against The Grain’s 35K milk stout is a monster-like character that walks the streets with a gun, kidnaps small bearded men, and has a thing for skeletons. This whole twisted scene is depicted on the label. It’s fine version of the milk stout — sweeter, low-alcohol ale brewed with rich, toasted grains and lactose sugars. A few earthy hop additions round out this beer, making it a bit sharper than most milk stouts. The 35K makes a great post-meal sipper. 7%

Hommel is the local abbreviation of humulus, from the botanical name for the hop plant. Confusingly, it also means bumble bee in Flemish. Poperings Hommel Bier is a hoppy, golden-bronze, ale made from a blend of winter, summer and aromatic pale malts. Although, fermented with Belgian yeast, Brewers’ Gold and Hallertau hops, both grown in Poperinge, are indeed throwing knives. 7.5%