Harmon Brewing adds a foeder to their fermentation program 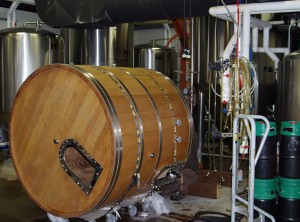 Fans of sour and fermented beers, if you aren’t already familiar with Harmon Brewing Company, you should make yourself acquainted with the Tacoma-based brewery right about … now.

Friday, a 20-barrel foeder was dropped in front of the company’s Harmon Tap Room brewing facility. Harmon Director of Brewing Operations Jesse Holder had to take a knee, overwhelmed with emotion after several years leading Harmon down the wood barrel road of Belgian beers and sours. Brewers Jeff Carlson and Bill Lundeen smiled and rolled in the barrel.

Foeders are giant wooden beer vessels, (pronounced FOOD-er, by the way) used for beers that require long-term fermentations, especially mixed-fermentation beers (additions of Brettanomyces and Saccharomyces yeast strains) and mixed-fermentation sour ales (i.e., beers fermented with Brettanomyces and/or Saccharomyces, plus lactic acid bacteria such as Lactobacillus and/or Pediococcus). It also imparts a bit of wooded character to beer inside. Breweries in Belgium have been using foeders for hundreds of years. New Belgium Brewing is a big fan and purchased quite a few of them several years ago. Locally, Elysian, Holy Mountain and Wander are Foeder Believers.

“We ended up going with Foeder Crafters,” explains Holder. “They have a solid product and amazing craftsmanship. We chose a 20-barrel standard, made of America white oak, and no char. It smells amazing.”

Holder and crew moved their keg washing station to the back room, and will allocate one of their fermenters and Brite tank for use with only a specific style of yeast. After they erect the foeder today, they’ll put it in line with the other two vessels. The foeder — which holds roughly 620 gallons — has a smaller footprint than an equal volume of barrels, so it takes up less space in the brewery. However, you’ll need to wait a couple hours today to see the foeder erect in the Tap Room. It arrived without a base. Lundeen is building one.

“It really means that we will be able to create an amazing Belgian and sour program on a larger scale than individual 53 gallon barrels,” adds Holder. “It gives our brewers a creative outlet to push the bounds of their craft.”

The surface area to volume is different in a foeder than a barrel, which means less oxygen exposed to the beer. And, it’s a bigger vessel, allowing the beer to mature and age without oxidizing as quickly. Also, the ratio of oak surface area to beer is a lot less so you won’t get as much oak taste. And ease of use — it beats the hell out of racking hundreds of barrels.

“My coworkers are saying it means a brand new hot tub if none of the beers are good,” he laughs.

By the end of the week the foeder should house a Flanders Red for a two-month soak.