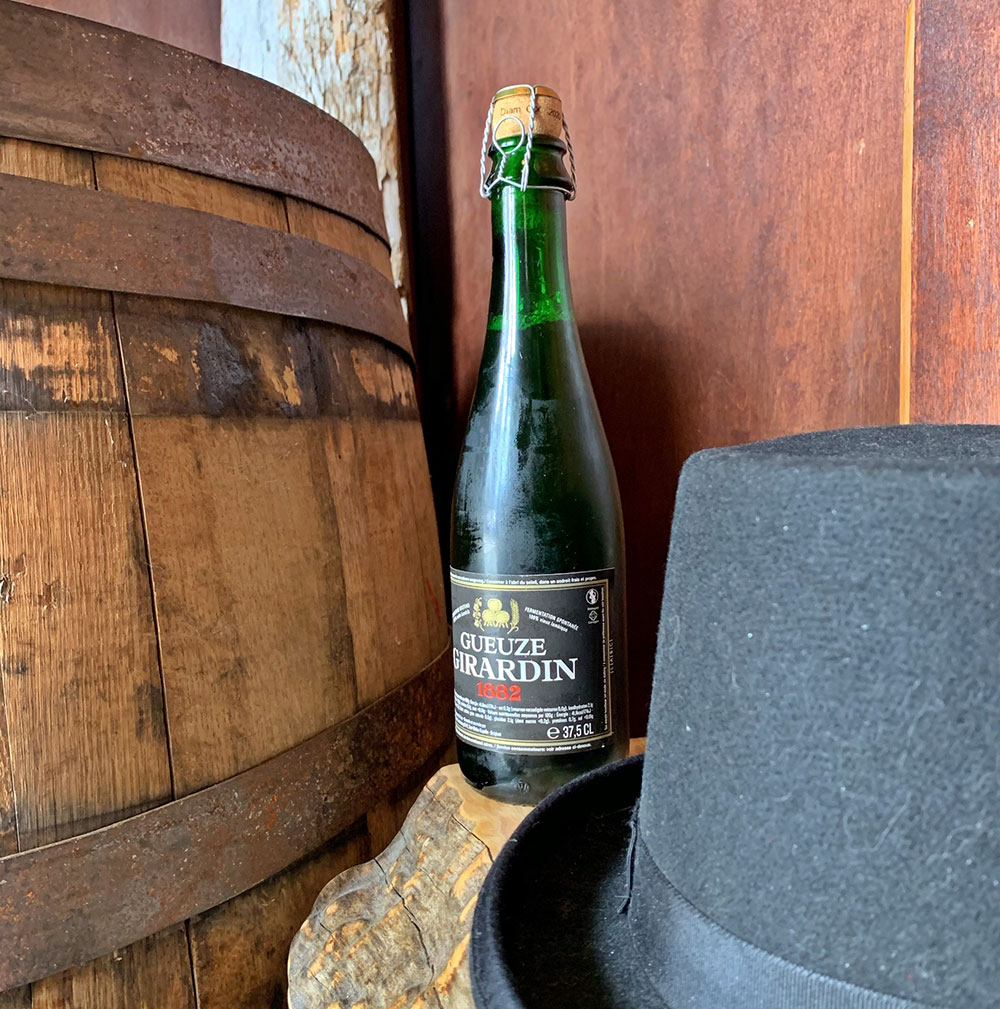 Consider the lambic. It originated more than 500 years ago in the Senne River Valley, south and west of Brussels, Belgium. Lambics are unique in that they are brewed with at least 30 percent unmalted wheat in addition to malted barley, preserved with aged hops, aged in oak barrels, and most differently, are spontaneously fermented. In traditional lambic brewing, the beer is boiled for an extraordinarily long time — usually at least three hours — and then the warm beer is pumped into a broad, shallow vessel called a koelship. The brew is left to cool overnight, uncovered, and the microbes that live in the brewery and blow in through open louvers settle into the liquid and begin the fermentation process. The “infected” liquid is then pumped into oak barrels to ferment and age for at least one year. Unblended lambic is beer aged from 1 to 3 years that is drunk straight. It is extremely tart and generally has little remaining carbonation, since the oak barrels in which it was aged are permeable and the CO2 escapes. Gueuze (pronounced Gooze) isn’t a different beer but rather a blend of lambics of varying ages and provenances — usually a mixture of old (3 and 2 years old) and young (one year old) lambics — then re-fermented in the bottle. The nature of the spontaneous fermentation means that each barrel of lambic is different — blending many barrels creates a balanced and recognizable product from year to year. That’s all fine and dandy, but this isn’t Know Your Lambics Sunday, but rather Fancy Pants Sunday, a weekly look at complex and, well, fancy beer. Fancy Pants Sunday: Girardin Gueuze 1882 fits the bill. Girardin Gueuze from Brouwerij Girardin is a lambic of exceptional excellence, the epitome of traditional gueuze — considered by many to be the finest lambic of all.

The Girardin family has been making beer since 1882 when they acquired the farm and its small brewery in the village of Sint-Ulriks-Kapelle near Brussels.  For most of the history of the family business, the farm has been the primary focus for the family. It’s only been in recent decades that Brouwerij Girardin has become more prominent.  Despite this increase in focus, the Girardin family is renowned for their secrecy and almost never allow anyone into their brewery. Also, a majority of their production is sold as wort to blenders such as 3 Fonteinen, Hanssens, De Cam, and Tilquin.

Girardin Gueuze 1882, sometimes known as “Black Label,” is both unfiltered and unpasteurized. Instead of the traditional gueuze blend of one-year, two-year and three-year old lambic, Girardin 1882 is actually a blend of 12-, 18- and 24-month-old lambic.

Although Girardin 1882 is distributed around the world, it is only sold in 375ml bottles in the United States — and Peaks and Pints scored a case.

It hits the nose with sweet orange and apricot, plus lactic tartness earthy hay-like notes, moderate sharp Brett aroma, light strawberry and plum. From the first sip, flavors of lemongrass, creamy oak, minerals, funky horse blanket, yeast and slight stone fruit sweetness flit in and out, with none more dominant than the rest. It’s funky, rustic, complex, and super tasty.