Elton John embarked on a farewell tour consisting of more than 300 shows across five continents between 2018 and 2021, including the Tacoma Dome tonight. One of the last rock ‘n’ roll piano icons is calling it quits after this Farewell Yellow Brick Road tour. John, born Reginald Dwight, was a prodigy who purportedly began playing piano at the age of 3. He had classical training, but it was Jerry Lee Lewis he chose to imitate at any school function he had a chance to play. Though performing and composing music came easily to John, it took meeting Bernie Taupin to complete him. Taupin wrote the lyrics to almost all the songs John performed, from “Tiny Dancer” to “Crocodile Rock” to “Saturday Night’s Alright for Fighting.” Will John wear the flamboyant costumes he wore in the 1970s at the Tacoma Dome concert tonight? Discuss it over our special Elton John tribute beer flight, Craft Beer Crosscut 9.17.19: Flight for Elton John. 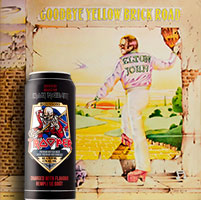 “Saturday Night’s Alright (For Fighting)” is about Bernie Taupin’s teen years going to British dance clubs, where fights were common. Many of Taupin’s songs are written to relate to Elton’s life, but not this one (or, frankly, the others in this flight) — it’s unlikely that Elton would be fighting in a club, unlike the 26-year-old male who allegedly punched a security guard at the Iron Maiden concert in the Tacoma Dome Sept. 6. OK, resulting scuffle with security guards happened on a THURSDAY night, but Iron Maiden lead singer Bruce Dickinson shut down that show for a few minutes, so Peaks and Pints is shutting down SATURDAY night with another Trooper — a Premium British Beer inspired by Iron Maiden and handcrafted at Robinsons Brewery in Stockport, England. Being a real ale enthusiast, Dickinson help brew Trooper with malt flavors and citrus notes, especially lemon, from a unique blend of Bobec, Goldings and Cascade hops. Actually, Tuesday night’s alright, whoo! Please don’t fight at the Elton John concert tonight! 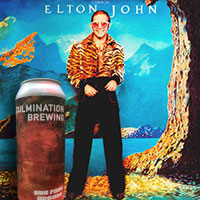 Don’t let the sun go down on me
Although I search myself, it’s always someone else I see
I’d just allow a fragment of your life to wander free
But losing everything is like the sun going down on me

Influenced by the Beach Boys’ sound and harmonies, Taupin told Esquire he didn’t want to write the same old “I love you, you love me, my heart will break if you leave me” song. Instead, he wrote the scenario with a heavy does of darkness, “Don’t Let The Sun Go Down On Me.” Portland, Oregon, brewery Culmination Brewing collaborated with Vancouver, Washington, brewery Trap Door Brewing on a hazy IPA dry hopped with Mosaic, Motueka, and Idaho 7 for loads of pineapple and pine. The two breweries could have named it “September Sun.” Instead, they offer a heavy does of darkness, Sun Fade Arcade, which might reference the sun’s journey back to the equator or an interruption of geostationary satellite signals caused when the sun lines up directly behind the a satellite. Either way, this delicious IPA would console a broken heart. See you at the Elton John concert after the sun goes down! 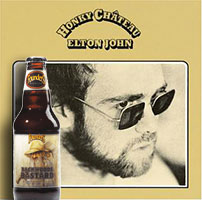 They said, get back, honky cat
Better get back to the woods
Well, I quit those days and my redneck ways
And, oh, the change is gonna do me good

Released July 31, 1972, “Honky Cat” explains where John’s lyricist Taupin would rather be — back on his farm in Lincolnshire, England, unlike city kid John. Founders Brewing Backwoods Bastard is like drinking bourbon from a bottle of scotch. The fact that Backwoods Bastard is boozier than its little Dirty Bastard brother is only a side note; the big distinguishing factor of this Scotch ale is that it is aged in bourbon barrels, with great undertones of vanilla, bourbon, oak and dark fruits. It’s smooth and creamy, with the mouthfeel of a milk stout and the body of a Scotch ale. Let this sweet Bastard sit for a few minutes for a richer taste as it gets warmer, reducing the sugar-sweet fresh-out-of-the-fridge impression and replacing it with a complex depth. It’s like finding gold in a silver mine. Elton John is at the Tacoma Dome tonight! 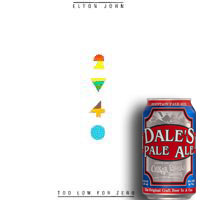 Taupin wrote “I Guess That’s Why They Call It The Blues” as a love letter to his wife at the time, Toni Russo, while he was away on the island of Montserrat. He’s telling her not to mope as time is precious and should be enjoyed to the fullest. It was a fluke that brought Alabama resident Dale Katechis to Colorado, but instead of moping, he made the most of the situation: he learned to brew beer and opened a brewpub with live music by blues luminaries. He met two people on a bike tour, Oskar and Old Blue, so we guess that’s why he calls his brewery “Oskar Blues.” Dale’s Pale Ale, Oskar Blue’s flagship American pale, was the first canned craft beer in America. Brewed with hefty amounts of European malts, Northern Brewer hops for bittering, Cascade and Columbus hops for flavor, and a big, post-boil addition of Centennial hops for aroma, Dale’s Pale Ale delivers a blast of hop aromas, moderate bitterness, stone fruit flavors, bready malts and a peppery citrus and arugula-like hop finish. A really nice and fresh, hoppy pale ale. Elton John is at the Tacoma Dome tonight! 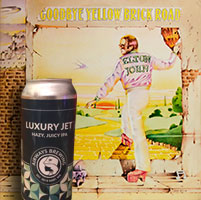 John wrote the music to this song as a homage to glam rock, a style defined by outrageous costumes that was popular in the early 1970s, especially in the UK. Artists like David Bowie and Gary Glitter got into the act, but for John, it was an extension of his personality. He became known for his wild appearance and collection of gaudy sunglasses. Hazy IPAs, the glam rock of craft beer, has landed at Airways Brewing as Luxury Jet IPA. Founder and head brewer A-A-A-Alex Dittmar and his Jet won a silver medal at the 2018 Sip Magazine awards in the Juicy/Hazy IPA category. This IPA straight outta Kent, Washington, has a smooth, creamy taste with melon hops and slight citrus. Elton John is at the Tacoma Dome tonight!