The first India pale ales originated in Great Britain as a modestly hopped pale ale, with just a little bit more hops flavor than other beer. Then American brewers started using newfangled hops such as Cascade, which Anchor’s Liberty Ale and Sierra Nevada Pale Ale use to great effect, giving the beer big citrus aromas and flavor. Then Lagunitas Brewing founder Tony Magee brewed his Lagunitas IPA in the mid-1990s, invented the West Coast IPA, which is all about the hops. Next came Vinnie Cilurzo — who went on to co-found Russian River Brewing — who brewed the first double IPA at his Blind Pig Brewing in Temecula in 1994. Bam! The double IPA was a thing. Also known as an imperial IPA, this style seeks to take both alcoholic strength and hop intensity to new levels. These big, bold IPAs have a strong hop profile with resiny, piney and/or citrus tones, depending upon the type of hops in the recipe. There should be some maltiness that lends balance and flavor complexity. Strength may range from 7.5 percent to 10 percent ABV. Many hop-centric brews seem to be in a race to out-bitter each other. Peaks and Pints is all about imperial IPAs as we prove with our Craft Beer Crosscut 3.15.19: A Flight of Imperial IPA. 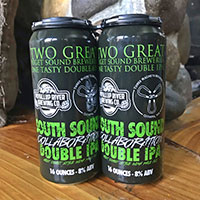 Two of the South Puget Sound’s most medal-winning breweries have teamed up on an imperial IPA. Owner and head brewers Eric Akeson of Puyallup River Brewing hosted Three Magnets Brewing head brewer Jeff Stokes from a day of brewing in Akeson’s backyard brewery. The result is a tropical and fruity imperial IPA brewed with Citra, El Dorado, Azacca, and Galaxy hops. They used Chico ale yeast on this one, with loads of oats, wheat and white rice in the mix. It’s smooth. 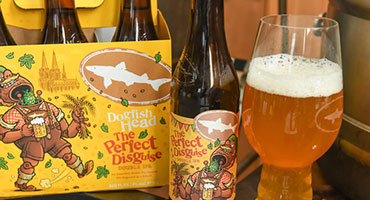 On the surface, Dogfish Head’s The Perfect Disguise looks like a straightforward kolsch with a crisp kolsch yeast and traditional German malts and hops — but things aren’t always what they seem. After the creamy mouthfeel compliments of German chit malt, the beer morphs into an imperial IPA with a double dry hopping with nearly 4-pounds of German and American hops per barrel, bringing tropical flavors of citrus, tangerine, mango, gooseberries and peach. 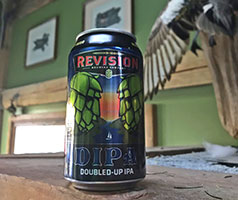 Jeremy Warren is widely admired for his mastery of hops, especially with his signature beer style, India pale ale. In 2012, his Knee Deep Brewing Co. exploded onto the scene when the brewery’s Hoptologist won the prestigious Bistro Double IPA competition in Hayward, California, besting the legendary Pliny the Elder, among others. In 2015, Warren left everyone knee deep in tears when he departed the brewery. In March 2017, he and his head brewer, Jeb Taylor, opened Revision Brewing Company in Sparks, Nevada — one of the largest, hoppiest breweries in Sparks, especially if you count their DIPA with loads of Simcoe and Mosaic hops battling for domination on the palate. 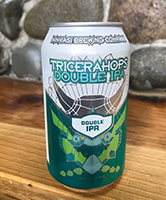 Ninkasi, the mythical god of beer, would be afraid of this Ninkasi Brewing imperial IPA. Hops explode in the nose, cascading pithy grapefruit, sticky pinesap and floral notes atop a caramel foundation. It hits the tongue hard with sweet caramel before a blend of Chinook, Cascade, Summit, Centennial and Palisade hops offer floral, fruity, and earthy notes, yet with a malt background. It’s hop-forward, full-bodied and strong. Yet the balance with the malt lends enough depth and a spicy complexity to make it very interesting. Resinous, citrusy, woody, and powerfully bitter, the hop flavors slowly unfold and last well into the aftertaste.

Bob Craig’s Walking Man Brewing is nestled in Stevenson, Washington near the Bridge of the Gods along the spectacular Columbia River Gorge. Since opening Walking Man Brewing in 1999, Craig has turned over the head brewing reigns to James Landers who churns out solid beers in a tiny space, including the Homo Erectus old school imperial IPA. The flavor leans toward sweet caramel malty followed by mild hop character that develops further toward the end.