One of the “Three Cs” along with Cascade and Centennial, Columbus — also marketed as Tomahawk, Zeus or CTZ — is a wonderful dual-purpose hop. Its versatility as either a bittering or aroma hop allows it to be used in a wider variety of beers than those one-trick ponies out there. Its high alpha acid profile makes for a great bitter foundation in a wide variety of styles including pale ales, stouts and especially anything imperial. Thanks to its earthy, herbal flavors, it is also a great choice for a single-hop brew and can leave a spicy or herbaceous feeling on the tongue. We salute this super alpha with our Craft Beer Crosscut 2.26.17: A Flight of Columbus.

21st Amendment Back In Black

Inspired by Paul Revere’s midnight ride, Bay Area brewery 21st Amendment rebels against the British style IPA, embracing the more aggressive American version — a combo of Columbus and Centennial hops for flavoring — and then recasts it in bold, brave, defiant black. A clear, cola-colored craft beer, Back in Black has ruby and candied orange hues and is topped with a pillowy tan head. Chocolate covered cherries, caramel and plums are some of the aromas noted, and we taste roasty coffee in the beer’s smooth body.

As part of its Imperial Series, Fremont’s The Sister hides its heavy hop presence — Mosaic, Ekuanot, Amarillo and Columbus — with a nose that links together apricot, tangerine and star fruit into something wholly engrossing. We are hit with a strong hop element with our initial sip that quickly dissipates due to a considerable amount of malt in The Sister, which it balances the hop side. The Sister gradually ends on the sweet side with the aforementioned flavors dancing on the tongue. This imperial IPA packs a bevy of tastes. 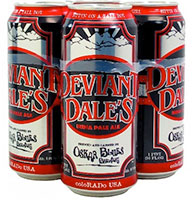 Those Centennial hops steal the show in this super citrusy, grapefruit IPA, but it’s dry-hopped with Columbus so welcome to today’s flight Oskar Blues Deviant Sale’s Pale Ale. It’s hoppy; not a crazy or overwhelming amount but it knocks us around at bit. We also taste a wee bit of malt mixed in as it slips down the back of our throats. This is definitely an all around hop-bomb, packing light citrus and resiny hop aromas and flavors.

Once a limited seasonal release, Silver City Brewery now releases this lupulin licker year round. The beer pours deep orange in color with a creamy white head. Strong notes of orange peel and citrus show on the nose with hints of grain and floral notes, which should be expected since Brewmaster Don Spencer dumps 50 pounds of Cascade and Columbus hops per each 15-barrel batch. As the beer warms, the citrus amps up the Whoop with a long, dry hop linger.