We all want to be drink better, improve our beer choices, make use of every minute in our day, and become as efficient as you can possibly be — This the reason why Peaks & Pints February Get Stouts Done, PPFGSD, implementation craft beer drinking is very important. Peaks & Pints February Get Stouts Done is one the most popular systems among increasing stout efficiency and productivity enthusiasts. Peaks & Pints loves it because it is the perfect tool to help clear your mind and focus on the things that are truly important: stouts. PPFGSD implementation can bring back much needed peace in your life as it brings out order from chaos. When you start out, PPFGSD can be very confusing and you might not be sure how you can implement it. That’s why Peaks & Pints February Get Stouts Done was created. Simply visit our craft beer bar, bottle shop and restaurant in Tacoma’s Proctor District daily, enjoy the six or seven stouts on tap, and check them off your list. Today, we make the process even easier. We offer a flight of five stout tasters in what we call Craft Beer Crosscut 2.18.20: Flight of Stout Month Winning. PPFGSD! 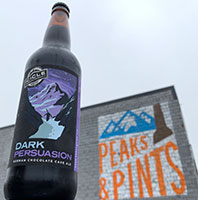 Icicle Brewing Co. sits in the Bavarian theme park known as the city of Leavenworth, which seems perhaps the most appropriate place for a brewery. Owner Oliver Brulotte, who has deep family roots in Washington’s hop farming history, basically launch the Wenatchee Valley’s craft-beer boom. The brewery draws their water from nearby Icicle Creek, a run-off from surrounded by numerous mountain ranges including the Stuart Range and Wenatchee Mountains. And, Icicle Brewing makes a liquid German chocolate cake, Dark Persuasion. Seriously, this stout tastes exactly like German chocolate brownie, with strong chocolate and coconut notes, a touch of vanilla and a smooth finish. Peaks & Pints scored the raspberry variant of Dark Persuasion for all of that plus raspberry. 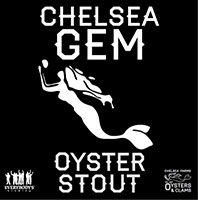 The tradition of brewing with oyster shells goes way back to England in the early 1900s. Brewers used oyster shells as a fining agent to help with beer clarity. The shells would collect yeast and hop particles and help them sink to the bottom of the tank before packaging. Alternatively, Everybody’s Brewing decided to add Chelsea Oyster Farms oysters during the boil of their oyster stout, Chelsea Gem. The Chelsea Gem oyster shells contain calcium carbonate, and when released in the boil, add just a touch of mineral flavor. This helps impart a much creamier body to the beer. The chocolate and sweet milk flavors are front and center, with just a mild touch of the sea. 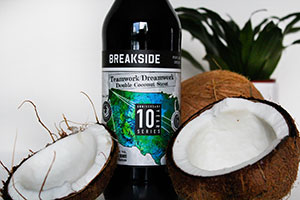 Teamwork/Dreamwork is the next installment of Breakside Brewery’s 10th anniversary collaboration series. Over the last 10 years, Breakside says they have benefited tremendously from Fremont Brewing’s willingness to share their knowledge and experience. “Fremont’s brewers deftly make a wide range of styles, but it is their expertise in making big-bodied, higher alcohol beers that we wanted to tap into for this collaboration. Together, we’ve concocted an experimental ‘double stout’ — a beer made using a double mashing process, boiled for 3 hours to maximize strength, and conditioned on half a pound of coconut per gallon,” states Teamwork/Dreamwork hype. 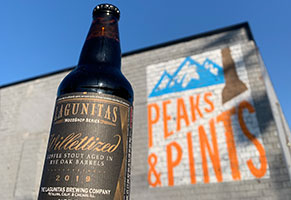 Kentucky’s Willett Distillery has one kind of barrel: wood. And they put two things in them: bourbon and rye. Lagunitas Brewing Co. grabbed a few used Willett rye barrels then filled them with their Imperial Stout and a bunch of coffee. Expect lots of creamed coffee aroma and flavor, plus bits of brown sugar and alcohol at the fringes. Diving deeper results in a chocolate, roasty, fruity flavor with a restrained sweetness. We also get spicy, earthy, woody vanilla from the barrel. 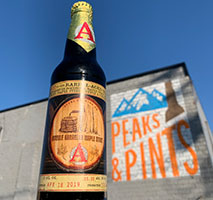 Avery brewed an imperial stout, aged it in bourbon barrels, then aged it in maple syrup barrels and dosed with coffee, cinnamon, and extra maple syrup for a shimmering black body with a darker beige head. Double Barrel Maple Stout hits the nose with strong maple and wood with supporting earth, bourbon, coffee, and fudge. The flavor continues on this theme — maple, bourbon and wood leading with fudge and coffee jumping up more, but has a sharp infusion near the finish of cinnamon.