After working for a company building farms in developing countries and then earning a master’s degree in environmental policy, Brian Dunn was flying to interview with an agribusiness company when he decided to scrap those plans and open a brewery instead. He grabbed a loan from the city of Denver to open up in what was then a desolate Ballpark neighborhood, and he would begin brewing at 3 a.m. before heading out to peddle his new product to local liquor stores and bars. The year was 1994. The product was Great Divide Brewing Co. That one-man operation grew as American drinkers expanded their palates in the late 1990s and early 2000s and began to flock to Great Divide’s big beers, from its Yeti Imperial Stout series to its hoppy monsters like Titan IPA and Hercules Double IPA. Today, in conjunction with our Lodge Meeting with Great Divide tonight, we offer an all-day flight of Dunn’s beer in what we call Craft Beer Crosscut 11.13.19: Flight of Great Divide.

Great Divide has brewed a trail beer with a blend of noble and new world hops along with German malts and a traditional lager yeast. The nose takes in malt, lightly hoppiness, grain, and some corn. On the tongue, the hop notes are Noble ones, but in balance with the light caramel malt sweetness. Corn not really a thing here. 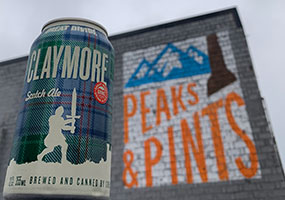 Named for a medieval Scottish sword, Claymore Scotch Ale is Great Divide’s tribute to the legendary “wee heavy” beers of Scotland. This malty, deep-ruby beauty boasts a roasty, chocolate aroma with light peat smoke threads. Creamy on the tongue, this smooth beer delivers a wealth of toasted malts amplified by more peat. As the beer washes back, fresh plum peeks out from the smoke, adding a sugary-sweet element to this dark beer. 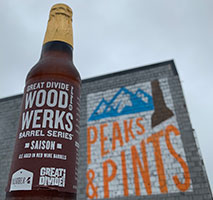 Great Divide began barrel-aging beers around 2004 with very small releases and nearly all barrels coming from Stranahan’s Whiskey. In 2008 the program grew to three releases a year with Barrel Aged Yeti, Barrel Aged Old Ruffian and Barrel Aged Hibernation. All three of these beers were released as part of Great Divide’s original barrel aging program until 2018 when the brewery introduced Wood Werks, a new lineup of limited edition barrel aged and sour beers. For this release in the Wood Werks series, they brewed a spicy saison with spelt and rye before aging the beer in Merlot and Cabernet Sauvignon barrels for 10 months, which will round out the overall character of the beer. The result is a bready, earthy, and spicy saison with a smooth mouthfeel, a hint of vinous character and a splash of color from the wine. 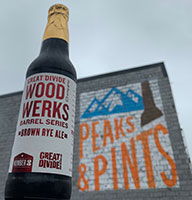 Great Divide Wood Werks Barrel Series #3: Imperial Rye Brown is aged in 10-year rye whiskey barrels for more than 13 months with copious amount of malted and flaked rye. The taste begins with sweet caramel, toffee and chocolate malt flavors as well as having a rich, full body and smooth, decadent mouthfeel. It finishes smooth with earthy rye, whiskey, vanilla and oak flavors as well as a little bit of warming booze that lingers on the palate after each sip.

Great Divide replaces Hop Disciples IPA with Hopnaut in the Tank Farm series lineup. The New England-style double IPA is brewed and double dry-hopped with an unearthly amount of Simcoe, El Dorado, Mosaic, and Huell Melon hops — over a pound and a half of hops per barrel. Expect bold tropical fruit and citrus notes along with hints of berry, stone fruit, pine, and bubblegum.