Jeppe Jarnit-Bjergsø, the founder and man behind Evil Twin Brewing, was a physics and English teacher in his native Denmark before starting Copenhagen’s Ølbutikken, a highly regarded beer store. He’s also an evil twin himself. His brother, Mikkel Borg Bergsø, brews under the Mikkeller label. Jarnit-Bjergsø, however, has done his best to outshine the good twin. He founded Evil Twin in 2010 as a nomadic brewery. Like his brother Mikkel, Jarnit-Bjergsø would concocts a recipe for his beer and hand it to another brewery with some extra capacity. In 2012, Jeppe Jarnit-Bjergsø moved it to Brooklyn and relocated there with his family, opening the beer bar TØRST the same year. In November 2018, he’ll finally open a permanent production facility in Brooklyn’s Ridgewood neighborhood. To make matters more interesting, Evil Twin comes hot on the heels of the opening of his rival brother’s brewery Mikkeller in Queens. Today, Peaks and Pints presents a flight of Evil Twin craft beer in what we like to call Craft Beer Crosscut 10.13.18: A Flight of Evil Twin Beer.

Evil Twin Some People Are Immune To Good Banana Stout

Knock, knock. Who’s there? Banana. Are you sure? The banana is subtle in this imperial stout with banana and maple syrup additions. Brewed at Westbrook Brewing Co. in South Carolina, Evil Twin’s Some People Are Immune To Good Banana Stout hits the nose and tongue with roasted malts, chocolate, maple syrup and mild banana character. We’s gotsta have more banana, Evil Twin! Some People Are Immune To Good Banana Stout does have a big body, syrupy mouthfeel and the chocolate is accountable in this tasty stout.

What’s up with Evil Twin’s fascination with Jesus? Well, it arose during non-Christian Jeppe Jarnit-Bjergsø’s pricing email exchange with a business partner. One particular price caused the brewer to write, “Jesus, this is expensive.” The next email received had an even higher price listed prompting, “even more Jesus.” What followed was a string of craft beers with “Jesus” in the name, including Even More JCs, an “affogato-style imperial stout” brewed with lactose and conditioned on coffee and vanilla beans. An affogato, which translates to drowned from Italian, is a coffee-based drink that is usually made up of a shot of espresso poured over a scoop of vanilla gelato or ice cream. The aroma and flavor isn’t surprising: sweet milk chocolate, light vanilla and a hint of coffee.

Brewed at Dorchester Brewing Co. in Boston, Evil Twin’s Irish-ish Coffee Stout is a massive winter warmer is brewed with lactose, fancy sugar, nutmeg, vanilla, medium toasted oak spirals and, of course, a ton of coffee from Tandem Coffee Roasters. Flavor is extremely rich and dense, with loads of burnt brown sugar and coffee dominating upfront, followed by oak, nutmeg and a hint of vanilla. 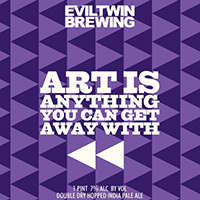 Evil Twin Art Is Anything You Can Get Away With IPA

Brewed at Westbrook Brewing Co., Art Is Anything You Can Get Away With IPA is part of Evil Twin’s Erase & Rewind series, number 25 to be specific. The silky smooth New England style IPA sees a double dry hopping of Galaxy, Topaz and Summer hops. On the nose and across the palate presents impressions of sweet grapefruit juice and dry pith, pale melon flesh with a hint of green mango skin. Sweetness is moderate, fading to mild as a moderate bitterness settles. It finishes with a lean feel and a sharp tingle of citrus.

Seeing a beer with “Lite” on the label and 8.5% ABV would seem to be a contradiction in terms. Evil Twin Molotov Lite is actually a scaled-down version of the brewery’s 13 percent ABV Molotov Cocktail. Originally brewed at Two Roads Brewing in Connecticut, this double IPA pours a dull yellow with a tight white collar. The smell of citrus assails the nose before rich malt rides the tongue from beginning to end, with a slight vanilla or birthday cake flavor on the back end. Pineapple, peach, pear and grapefruit are all prominent — akin more to hard candy rather than juice. There’s an intense sensation of bitterness as well; it’s slightly dry but nothing the average hophead can’t handle.