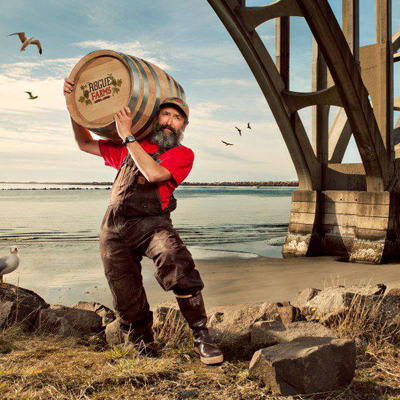 Owners: Rogue Ales was founded in Ashland, Oregon, in 1988 by three Nike, Inc. executives: Jack Joyce, Rob Strasser, and Bob Woodell. The company relocated to Newport in 1989 and opened its flagship brewpub on the town’s waterfront. Brett Joyce is the president.

Specialty: “Rogue is a small revolution, which expresses itself through handcrafted Ales, Porters, Stouts, Lagers and Spirits, and this is the way we conduct our business. The spirit of the Rogue brand, even the name, suggests doing things differently, a desire and a willingness to change the status quo. A Rogue Ale, Porter, Stout, Lager or Spirit is crafted to give it unique character, innovative in its makeup and brewing, a process that has not compromised quality. We believe if a Rogue Ale, Porter, Stout, Lager or Spirit cannot be all of these things, it should not be made at all.”

>> Rogue’s beers are distributed in 50 states and 54 countries. It runs 11 brewpubs and restaurants throughout Oregon and California, a production brewery in Newport, Ore., and a staff of more than 300.

>> Rogue runs two farms: One for its malting operation in Tygh Valley, Ore., and another that’s an hour and a half from its corporate offices in Independence, Ore. where it grows eight proprietary strains of hops (tweaks of existing hop varieties), malt, pumpkin, jalapenos, wheat, cucumbers, botanicals, marionberries, hazelnuts and other ingredients for its beers and spirits.

>> Rogue made a move into the spirits space with a line of gin, rum and whiskey with distilleries split between their Oregon coast location and downtown Portland.

Rogue Ales & Spirits is an agri-fermenter founded in Oregon in 1988 as one of America’s first microbreweries. Rogue has won more than 1,800 awards for taste, quality and packaging and is available in all 50 states as well as 54 countries. Since 2008, Rogue has remained committed to saving the terroir of Oregon hops, barley, rye, wheat, honey, jalapeños, and pumpkins one acre at a time by growing its own.