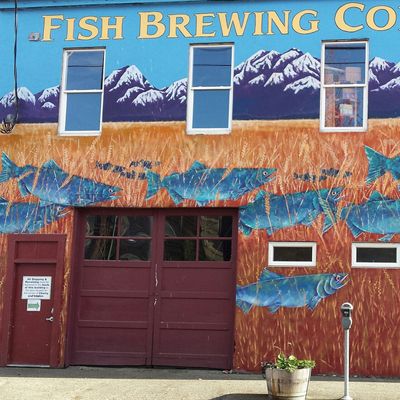 Fun Facts:
>>> Monday through Friday, 5 p.m. arrives as a steam blossom rockets up from Fish Brewing’s roof. Then comes the blast. It’s the Fish Whistle — so reliable, you can set your happy hour by it.
>>> Three distinct brands make their home under Fish Brewing’s roof: Fish Tale Organic Ales, Leavenworth Biers and Spire Mountain Ciders, the nation’s oldest operating commercial craft cider maker.
>>> Fish Brewing operates a full service pub across the street from the brewery, which was featured on the Food Networks show “Diners, Drive-in & Dives,” and a new taproom in Woodinville, Washington.

Founded in 1993, Fish Brewing Company is owned by more 400 beer drinking consumers, who pooled their resources to build a landmark brewery in downtown Olympia, which is known for its quality water and artesian wells. Hand-crafted at the famed 40-Barrel Brewhouse, the Mighty Fish Brewers create their proudest achievements: Award-winning Fish Tale Organic Ales. Their whiskey and wine barrel age program will roll out Poseidon Imperial Stout in 2016/17. In addition, a distillery in the works.