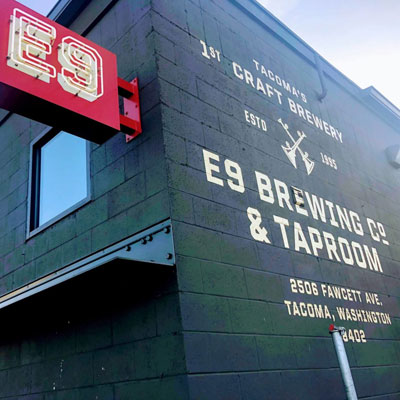 Fun Facts:
>>> Engine House No. 9 was built in 1907 to provide fire protection for Tacoma’s North End. For many years it served as battalion headquarters. Today, the building is listed on the National Register of Historic Places.

In 1995, Dusty Trail converted the historic Engine House No. 9 bar into a brewpub, and brought back the Tacoma Brew, the famous Tacoma lager of 1888. Dick Dickens grabbed the reins in 2002, bringing in head brewer Doug Tiede. Heads turned and medals were hung. In 2011, X group purchased E-9, with Shane Johns running the kettles. Saisons and sours and gold medals followed. Plans are in motion to expand the existing brewery fermentation capabilities, as well as the creation of a new barrel storage facility that will increase current barrel age ten-fold. The existing 7 bbl brew house will remain intact with a few needed upgrades in the original space. The first phase of the new Barrel House addition will be located in Tacoma’s Stadium District, closer to downtown. Tacoma’s first craft brewery will now have the first Barrel House in Tacoma, and possibly the state.

In May, 2019, E9 Brewing left Engine House No. 9 and opened a brand-new brewery and taproom in Tacoma’s Historic Brewing District. The new 15-barrel brewhouse features 12 taps with a focus on the brewery’s award-winning farmhouse and wild ales, hop forward pales and IPAs. They also added a canning line. An overall re-branding has brought life to the outside of the facility, new merchandise and all future bottle and can labels.

In 2019, E9 was one of only 28 US breweries to participate in Belgium’s Brasserie Cantillion’s, Zwanze Day celebration, where Cantillion simultaneously releases their limited edition specialty beer at 40 locations world-wide.