Hiking is one of the simplest, purest, most pleasurable things you can do. At walking speed, you can enjoy things, such as wildflowers, the gentle flow of a stream, or even the wind playing through the leaves of a tree, things you might not notice driving or even bicycling. But in Washington state, where we have such things as The Enchantments, Alpine Lakes Wilderness, and the Cascade Mountain Range, the fine becomes the sublime. Sitting atop a peak in the Methow Mountains at midday in the summer is awe inspiring. Kicking back along a quiet trail near Leavenworth in the early morning or at dusk is nothing short of magic. Packing in a Peaks & Pints Campfire Crowler of our house beer Old Schoolhouse Between Peaks IPA then pouring it into a camping mug between peaks nears anthropomorphism, especially if it’s amid one of the 101 peaks between Old Schoolhouse Brewery in Winthrop and Peaks & Pints in Tacoma’s Proctor District. Welcome to Between Peaks: Hiking with Old Schoolhouse Beer — a yearlong mash-up of mountain hikes and a delicious old school citrus and piney IPA.

“Did you know they’re 101 mountain peaks between Peaks & Pints and Old Schoolhouse?” asked Bryan Johnson, Tacoma school teacher, filmmaker and Peaks & Pints Pal. “May I suggest you call your new Old Schoolhouse house beer ‘Between Peaks IPA’ — not only because of all the peaks between Tacoma’s Proctor District and Winthrop in Eastern Washington, but also there’s no better time to drink an old school IPA then between peaks.”

OK, Bryan. We will. Thanks!

That verbal exchange not only named our 2021-2022 house beer, Between Peaks IPA, but also launched a hiking program to ascend as many peaks between the two cities with our Campfire Crowler of Between Peaks. A bum knee delayed the launch of Between Peaks: Hiking with Old Schoolhouse Beer from November 2021 to February 2022. 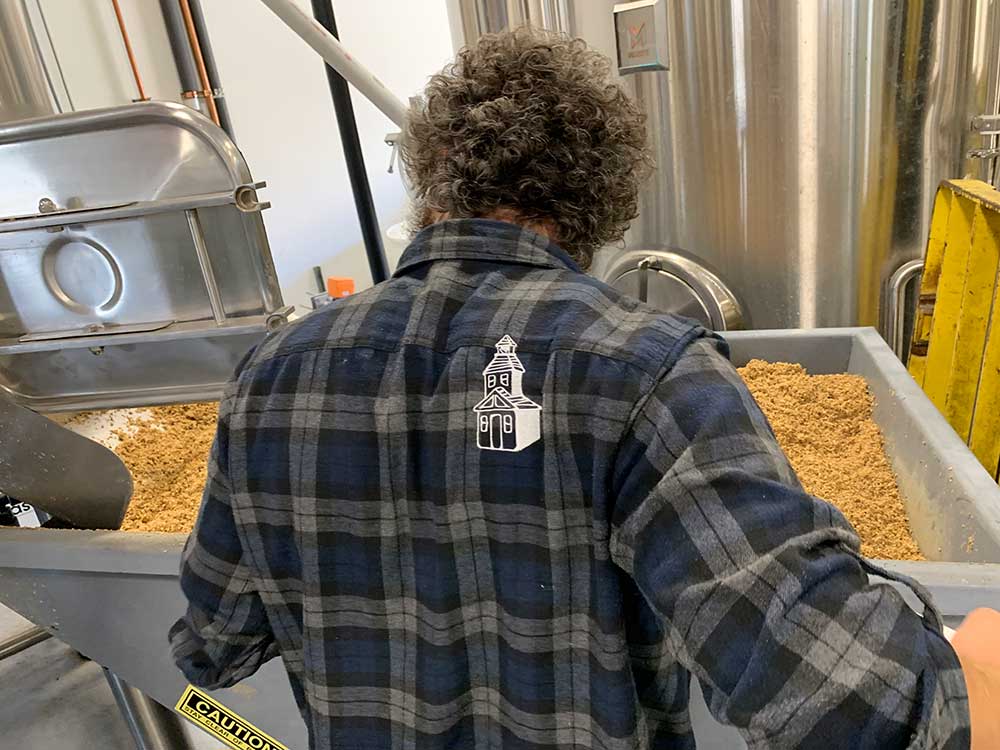 Between Peaks: The Beer

Casey and Laura Ruud purchased the floundering Winthrop brewery in 2008, changed the name to Old Schoolhouse Brewery, cleaned it up, and quickly turned it into an award-winning gem of a brewpub. Life happens, and the Ruud’s sold the brewery to three gentlemen who grew up in New Hampshire together, brothers Nathan and Jacob Young and Troy Anderson. Jacob and Nathan knew restaurants and bars inside and out. Troy coached high school track with Jacob and worked at Microsoft with Nathan. All three enjoy the outdoors, which is almost mandatory since the original riverfront brewery and gastropub is in Winthrop, which sits east of Mazama and north of Twisp in Okanogan County. Old Schoolhouse Brewmaster Kyle Koger, who worked his way up at the brewery, mostly brews in their larger production facility and taproom in Twisp. Koger is responsible for taking the brewery to the next level — integrating the art and science of brewing beers with the medals to prove it.

Peaks & Pints approached Koger and Orcas Distributing, which distributes Old Schoolhouse beer west of the Cascades, in the summer of 2021 with the hope the exceptional brewery would pour their talent into a potential Peaks & Pints fifth house beer. While Old Schoolhouse excels at old school piney and citrus IPAs — staples of our house beer for the previous four years — we feared the brewery waded waist deep in production of their own beer. Koger’s affirmative answer planted smiles behind our masks.

Peaks & Pints co-owner Ron Swarner tied his possible beer recipe to the leg of a Western Tanager where it flew past 101 peaks to Koger’s brewmaster desk. A couple tweaks and the Koger’s brew log read: Simcoe, Simcoe Cryo, Cascade Cryo, HBC 638, and Chinook. In early October, Swarner traveled past said 101 peaks to Winthrop and Twisp to brew Between Peaks with Old Schoolhouse brewers Kyra Yanny and Ryan Rust. Koger dealt with his homestead’s busted irrigation pipe most of the day, but he did drop by to witness the shenanigans and hear the amazing Led Zeppelin brewhouse playlist. Old Schoolhouse rocks. Three weeks later, the incredibly smooth, orange-forward, citrus and pine IPA with a lovely bitter finish poured at Peaks & Pints 5th Anniversary Party Nov. 1, 2021, to many a delighted drinker. 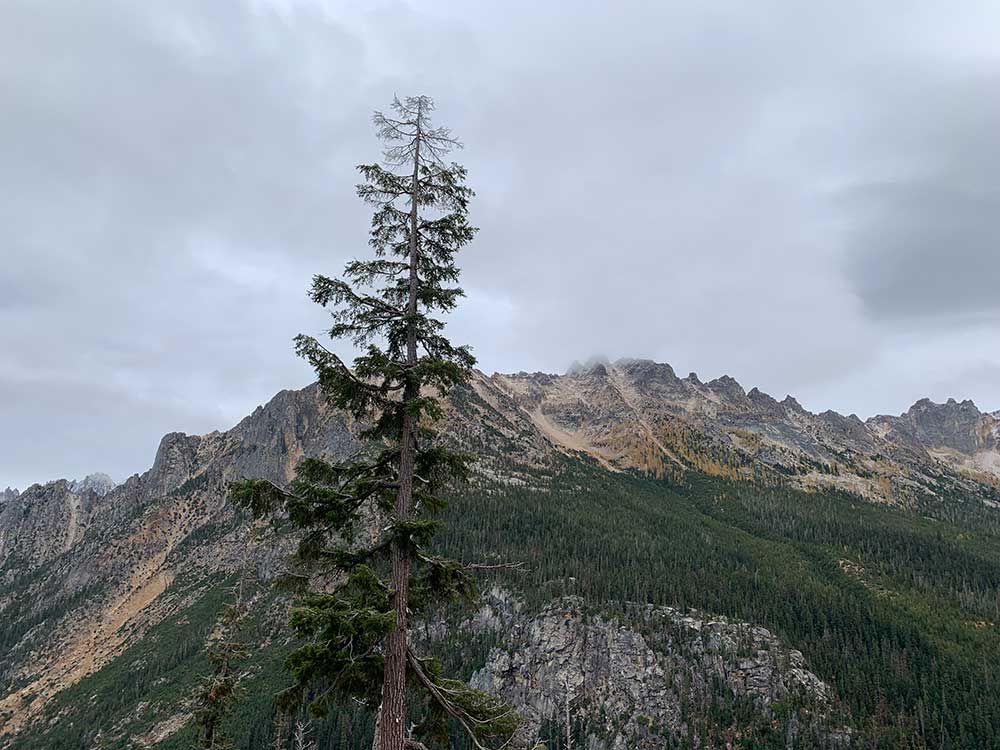 Between Peaks: The Hikes

Washington state is a spectacular place, characterized by stunning Olympic Peninsula coastlines, majestic mountain ranges, and lush forests. Some of the best places to appreciate Washington’s impressive scenery lie between the Methow Valley and Tacoma — the Issaquah Alps, the Alpine Lakes Wilderness, The Enchantments, Okanogan-Wenatchee National Forest, Lake Chelan-Sawtooth Wilderness, and the North Cascades Scenic Byway — large and diverse landscapes encompassing millions of acres along the west and east slopes of the Cascade Range, ready to be conquered with a Peaks & Pints campfire crowler of Between Peaks IPA.

Peaks & Pints presents a Between Peaks guide. Something to get you started, as well as a roundup of hikes we think might be worth the trip. As brevity is good and we don’t want to spoil things, what follows are highlights with some basic information — how far, how to get there (generally speaking), highlights along the trail, interesting places to rest on the way and where to drink our house IPA. It’s a guide in progress. We’ll summarize each hike along the 101 peaks expanse between Tacoma and the Methow Valley with a link below to lead you to the hike description on this website. Note: All distances are approximate, and all directions are to the best of our knowledge. Things change, so we strongly suggest that you not only consult trail maps before you leave but take it with you. In addition, you should consult the Ranger station or hike reviews for conditions and closures.

Are you ready to get Between Peaks? It’s go time!

The Heybrook Lookout Trail is often first to receive snow-free status in the Mount Baker-Snoqualmie National Forest. The trailhead for the moderate hike of 2.6 miles round trip and 850 feet of elevation gain to a lookout is visible from Highway 2 just beyond the town of Index. READ MORE

West Tiger 3 Trail, also known as T-3 among local hikers and Terminator hunters, probably won’t gain you the social media followers you desire, but the medium difficulty, 5-mile roundtrip trail will get your heart pumping and wake up your legs for the upcoming hiking season. READ MORE

The sound of a heavy rockfall echoes off Bandera Mountain. The sound of smashed rocks sends us a gentle reminder that we are not in charge here — we’re simply visitors — soaking wet and wobbly visitors. And our wobbly legs have nothing to do with the Peaks & Pints Campfire Crowler of Old Schoolhouse Brewery Between Peaks we have in our backpack. What begins as a gentle and well-groomed Ira Spring Memorial Trail turns into a rough and untamed rocky ridge up Bandera. A cold, wet training-less spring in Washington state didn’t help prepare our legs for the final push. Read More