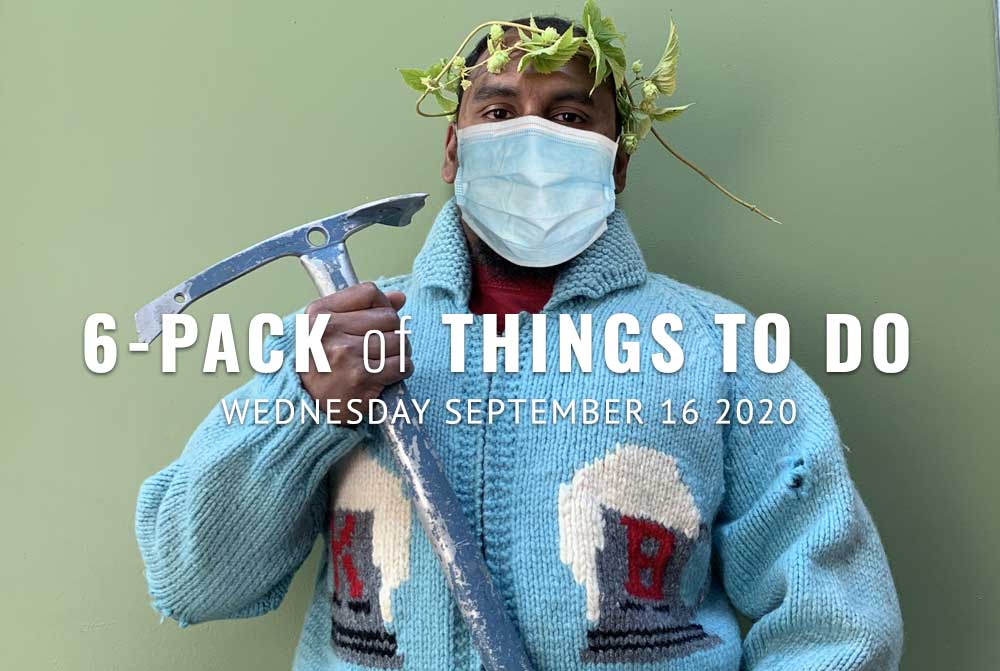 Did you see it? If you spin a color wheel you’ll see it’s called “blue.” Actually, “sky blue,” because it was, as you no doubt saw yesterday, in the sky. Those were also birds. And smiles. You see, the smoke is clearing. No, not “when the smoke clears,” because that all is still happening. Rather, the wildfire smoke is clearing. Still, the Peaks & Pints 6-Pack of Things To Do is using its indoor voice. Cheers!

FRESH HOPTOBERFEST: It’s day 16 of Peaks & Pints’ fresh hop and Oktoberfest crowler festival, Fresh Hoptoberfest. In keeping with our multi-rooted sensibilities, we’ve been throwing the best regional seasonal beers on tap from both Germany and our beloved Pacific Northwest. You’ll find an array of bright, hop-hazy fresh-hop beers, just hours from field to kettle and mere days from the fermentor to our Campfire Crowlers. And drink to your health with sturdy crowlers of clean, hearty Oktoberfest-style lagers from Germany and nearby. We’ll wager our pretzel bread sticks go well with both! Click here to discover what fresh hops and Oktoberfest beers are on tap today.

CIDER FLIGHT: After today, the temperatures begin to dip in the South Sound. Fall is (finally) here! Between living up autumn life with apple and pumpkin picking, flannel everything, cold-weather recipes — and all of the aforementioned captured on your friends’ Instagram feeds — Peaks and Pints bets you’re ready for cider. The fall harvest brings farmers and communities together to celebrate another year of fruitful labor. It is a time of shorter days, cooler nights and great apples. Put down those Mexican lagers. Back away from the pilsners. Summer may have lingered a little longer than expected in Western Washington, but the times finally appear to be changing. Meaning that Peaks and Pints’ Washington Cider Week to-go flight gives a nod to autumn themed ciders. 11 a.m. to 8 p.m., Peaks & Pints, 3816 N. 26th St., Basecamp Proctor, Tacoma

MATH AND MASHED POTATOES: How did the Romans actually do any mathematical calculations with Roman numerals? Without the concept of places (units, tens, etc.) how did they add, subtract, multiply, divide, sell slaves and build aqueducts? Peaks & Pints hopes Mike Spivey, professor of Mathematics, will answer the question when he and his colleagues dine and data in the University of Puget Sound Zoom Dining Room tonight. Four times each year, the Puget Sound Daedalus Society sponsors an evening of scholarship, debate, and dinner, at which colleagues can become familiar with each other’s areas of research and expertise. Tonight’s Spivey sits at the head of the table to share his recent work and pass the gravy. 6-7:30 p.m., UPS Zoom Dining Room, Meeting ID: 933 8139 6554

VIRTUAL TOUR: This tour of Fort Worden has to be better than the one we didn’t right after Strange Brewfest with flashlights loaded on pad thai beer. … Tacoma’s Pretty Gritty Tours is headed to Fort Worden tonight — virtually. Pretty Gritty will take you through the bunker and the buildings uncovering the echos and the shadows left behind. “Fort Worden was a United States Army Coast Artillery Corps base constructed to protect Puget Sound from invasion by sea,” writes Pretty Gritty. “Built between 1898 and 1920, Fort Worden was one of the largest Endicott Period (1890-1910) forts to be built and a rare example of a post built according to the precepts of the Endicott Board on land not already occupied by an existing fortification. It was located within sight of a potential (if unlikely) enemy fortification, a British Royal Navy installation on Vancouver Island in Canada.” Pair tonight tour with Port Townsend made cider, Alpenfire Pirate’s Plank Bone Dry Cider, from the Peaks & Pints cooler. 8 p.m., Pretty Gritty YouTube